REMEMBERING ED MUNA: ONE OF THE GREATS

The Guam Baseball Community mourns the loss of Ed Muna, one Guam’s greats. 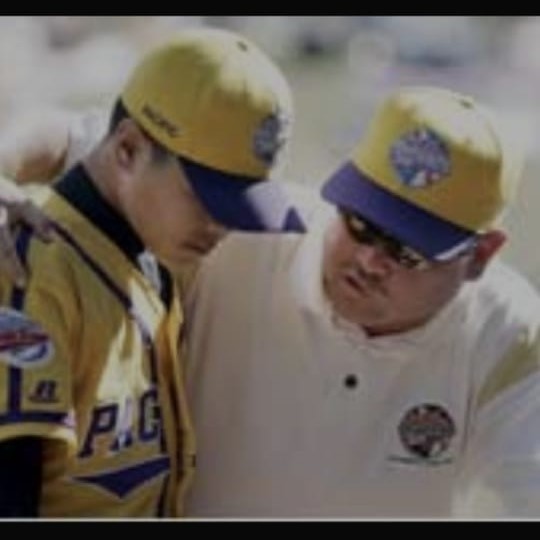 The sudden loss of Ed Muna on Sunday has shaken up the island’s baseball community.

Fondly known as Eddie Boy by family and friends, Muna was just 52-years-old the day of his passing, leaving those who’ve known him in shock.

Always up for a good laugh, Muna will go down as a quiet and respected baseball legend with one of the finest sticks and glove Guam has ever seen.

He started as a young gun with the ‘old’ UOG Tritons before making his biggest impact as a smooth second baseman for the Continental Golden Jets in the late 80’s and early 90’s, eventually winning the batting title and was a proven contact hitter with ice in his veins at the plate.

He continued his storied career in the Guam Masters League and teamed up with his brother Shon Muna to bring Guam all the way to the Little League World Series as a coach.

GSPN got with some other Guam baseball greats to reflect on what they remember most about Eddie Boy Muna.

Too young. I still can’t believe he’s gone. Eddie was a great friend. We met while playing for UOG. He was a very smart baseball player with good skills. Very humble and an enjoyable teammate. Even though we haven’t seen each other much since our baseball days, I’m going to miss him dearly. Whenever he saw me, he’d say ‘hey five nine’, that was my number. I’m going to miss that, too.

In my opinion, he is ranked one of the best baseball hitters Guam has ever had. He hit for average and was smooth with quick hands at second base.

I remember him growing up as a Golden Jet until I was a Jr. National player. We battled many times and he always seemed to own my number. Then when he became an AK Islander, we battled a lot with the Bank of Guam A’s. He owned my number and always squeezed a hit out of me. I refer to him as the Tony Gwynn of Guam. 100% contact hitter.

I could remember the days when I used to watch my Uncle Eddie and my other Muña family members play in the GML at the nostalgic Paseo Stadium. Uncle Eddie was hands down the smoothest second baseman in the GML. He was very classy and humble on the field. He was so calm at the plate as if every at bat was the same. One of the most consistent and clutch hitters in the GML record books. He was a very smart player and used his baseball IQ to excel in the game. I learned a lot from him, was an inspiration in my baseball career and will truly miss his presence. “Legends Never Die” /”Gone but never forgotten”.

I always remembered him coming in the clutch when the team needed him….sure handed 2nd baseman and part of the best double play duo (with my Uncle Keith Hattig) ever in Guam baseball history.

Eddie boy! Great guy who was one of the best contact hitters who hit for average. He was usually in the hunt for a batting crown. Always loved his approach at the plate. My prayers go out to his family.

Great guy! He never showed emotion on his face, just played the game and did whatever he was told to help win the game. Awesome hit and run hitter, very disciplined, great two-strike hitter. He was just a great team player. One of the great players from the Muna Clan.

I have had the privilege to watch Eddie play in my childhood alongside the many baseball stars and play against him as well. Awesome opposite hitter…,A real genuine person on & off the field. Rest in Peace Brother Ed.

Playing with Ed on the Golden Jets was fun . He was a great teammate took the game in stride . Played the game smart as all good players do. With him, he was a guy you would want at the plate very good hitter and very patient. When I’m on base and he was batting there was always something going to happen. Great teammate only good things we shared especially about the game. RIP 🙏 Ed thank you for the great years of being a friend and being a competitor on the field.