The St. John’s Knights took down the short-handed Friars with a game-winning goal in overtime. 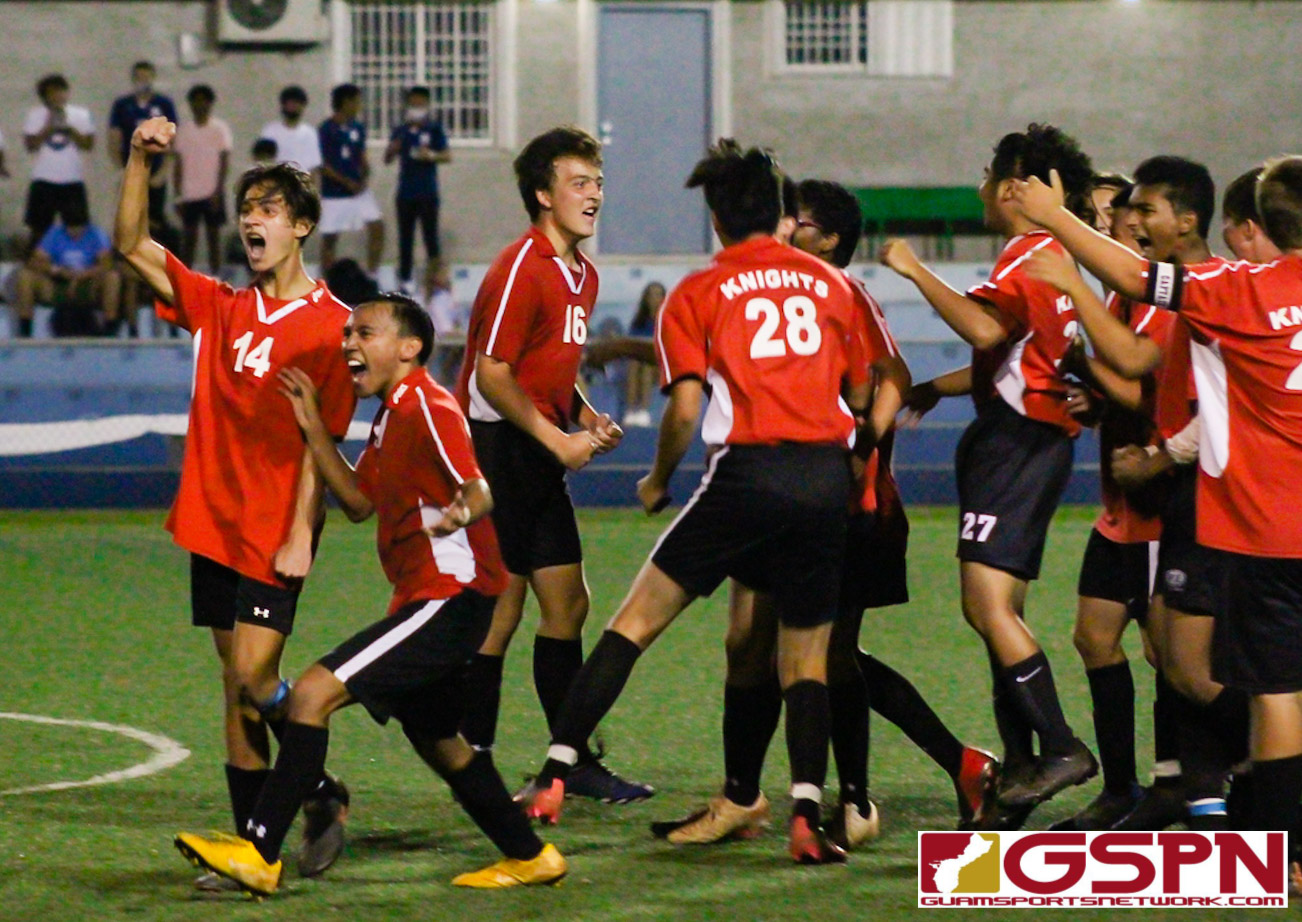 With the final goal scored in the final minute of overtime, the St. John’s Knights toppled the FD Friars for the IIAAG Boys Soccer Title with a 2-1 final score. Knight Taiga Simon made good on a penalty kick in the second half of overtime to stun the unbeaten Friars in the final Championship game for the 2020/2021 sports school year.

The game was dangerously close to going into a shootout with the overtime period reaching it’s end. Both teams scored their goals in the first half leaving the score deadlocked at one each. The overtime period consist of two 10-minute halves, no sudden-death, followed by a shootout if the score remains tied.

In the 110th minute, the Knights turned to Simon, who collided with the Friars keeper in a diving save attempt inside the box which drew the whistle. Simon knew exactly where he wanted to place his shot as he’d been practice for this exact moment.

“I went for the lower left side and I’ve been practicing that all season, staying back after practicing and visualizing it, and luckily I was able to execute at the end,” said Simon.

Aside from Simon’s game-winning goal, the biggest story of the night happened in the 30th minute as FD Friar midfielder Nainoa Norton was tossed from the game via red card after pushing a Knight to the ground. The game stayed a physical contest all evening from the opening kick to the final whistle. The red card forced the Friars to play the rest of the game, which turned out to be 80+ minutes, with just 10 players.

Even with one of their biggest weapons sidelined, the Friars were winning possession of the ball which put a lot of pressure on Knights Keeper Miles Ganeb, who came away with seven key saves in the second half.

“Most of the players in FD train with me in Nationals so the pace and power of their shots are familiar and I’m used to it. But my defense came in and covered for me too, I love these guys and they’re the best. I really wanted to win tonight for my seniors,” said Miles.

The Friars had defeated the Knights 5-1 in the regular season finale last week which served as a Championship preview for Monday’s game. The loss had the Knights go back to the drawing board and change just about everything in preparation, also quickly putting their big defeat behind them.

“The moment it was over we forgot about it,” said Miles. “We were thinking instead, we’re going to win for our seniors. The week of training before this game we worked on every little detail because we really wanted to win this for our seniors tonight.”

“We changed the whole formation and realized we needed to work harder at midfield. That’s where [FD] was passing between us and making us look like fools. We know we’re not fools so we just worked harder,” said Knights Leyton Milner.

The Friars got a quick strike goal in the 15th minute on a breakaway score from sophomore EJ Sablan to go up 1-0. FD had early momentum until the ejection of Norton, which completely shifted the state of the first half.

The Knights picked up the equalizer in the 40th minute after Leyton Milner surprised the Friar defense, beating everyone to the ball after a keeper touch to score from the lower right corner.

“We practice on crashing blocks and when the ball rebounds off the keeper, I wanted to be first one in there. That was my desire and I wanted to get there,” said Milner.

Milner was getting heckled by some of the Friar Nation student fanbase in the stands, but he admitted it was the best compliment they could’ve gave him.

“They were picking on me because they saw me as a threat so I definitely take that as a compliment,” said Milner.

The Knights and Friars left it all on the field with both teams visibly exhausted, stretching in-between possessions and slow to get up after each tumble.

“That’s what we like to see,” said Simon on everyone giving it their all. “It just improves the level [of soccer] on Guam and we want to keep that level high.”

This marks the first soccer Championship for Knights head coach PK Harmon, who entered the high school ranks for the very first time this year. St. John’s made a clean sweep in soccer after winning the girls title just last month.