Tåsi Ada achieved the title of Doctor of Physical Therapy this past summer after getting into the field a decade ago. 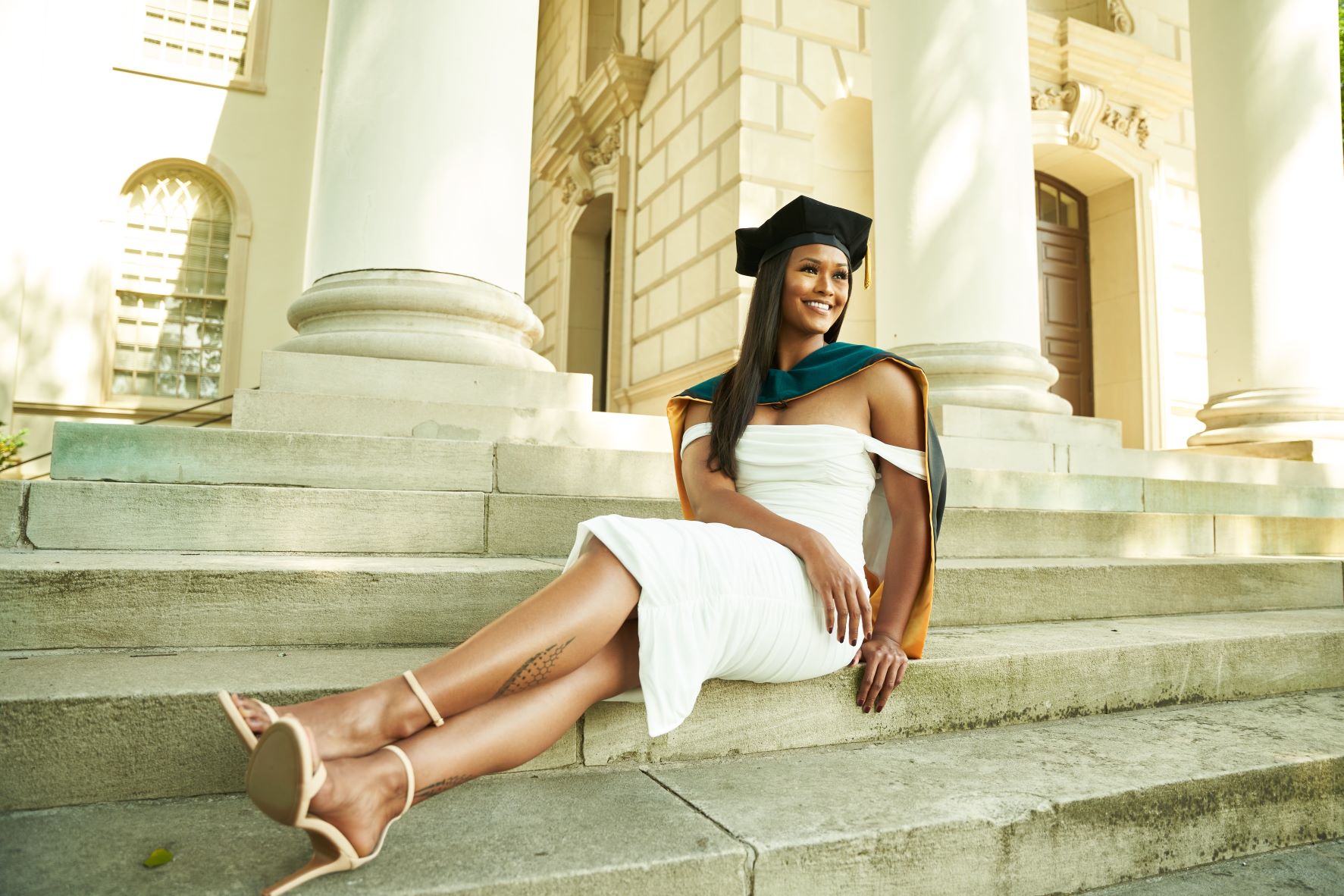 Dr. Tåsi Ada had a career calling in 2011 while competing for Guam Rugby in the 2011 Pacific Games. Ada was inspired by physiotherapist Peter Hunt, who was the Team Guam physiotherapist at the time, after seeing how much of an impact he had on the teams ability to perform.

Fascinated by Hunt’s work, Ada took on the tall task of joining the physical therapy field, completing her undergraduate degree at UOG in 2015, but Ada didn’t stop there. In August of 2021, Ada accomplished one of her greatest trials – getting her doctorate and becoming a Doctor of Physical Therapy after graduating from Mary Baldwin University in Virginia.

The East Coast is a long way from home and all Tåsi has ever known was Guam, which made the venture to get her doctorate a difficult decision in itself. The move to the East provided plenty of opportunities for Tåsi as she got experiences in fields of physical therapy, biometric screener and health education. While working these different jobs, Tåsi reaffirmed that this was the career field for her after working closely with patients.

“I really fell in love,” said Tåsi during her time with patients. “I wanted to spend time getting as much experience as I can to see if this was really for me. After spending so much time with the patients I instantly knew this is what I wanted to do. Working with patients is the most fun part of it all.”

With some reassurance from Guam’s Dr. Ryan Claros, who is also a Doctor of Physical Therapy, Tåsi applied to PT School.

“Having convos with [Claros] really helped motivate me to pursue the DPT. We had similar backgrounds and he made believe that if he could do then why can’t I?,” stated Ada.

After collecting all the prerequisites that she needed, Tåsi applied to a handful of schools fearing her chances of getting accepted.

“That whole process was extremely challenging, but that’s how it all began,” said Tasi.

First year of PT and the Pandemic

Tåsi’s first year of PT was a bit of a culture shock. Ada was surprised that there weren’t many Pacific Islanders in her program, combined with the fact that Virginia is far away from Guam.

“That was a real shocker. Maybe it was the location in Virginia, but I didn’t realize until looking at the statistics how few Pacific Islanders are being accepted into the program,” said Tåsi.

Though, she was surrounded by a group of like-minded individuals who were as fascinated with movement and exercise just as much as she was.

Tåsi spent her first two years doing academic work, but her final year was spent going through clinicals. As Ada was the verge of what she was most looking forward to, interacting with the patients, the COVID-19 Pandemic hit. Ada wasn’t even sure if they were going to get to do clinicals during the lockdown phases, but she did gain a lot of knowledge working with telehealth and doing online presentations while areas were locked down.

Tåsi was a step ahead of her other peers having taken her practical and exams before the lockdown which made her a prime candidate for clinical rotations once the lockdown restrictions started lifting.

“That was the fun part,” said Ada on her final two years of the program. “You got to apply all the skills you’ve attained and getting to know the patients while being able to help them made me realize how much loved what I was doing. At the end of the day, be it that last year doing clinical, it really solidified how much I love this profession and how much I wanted to use it to help our community.”

Working in the middle of the pandemic highlighted Tåsi’s need to be flexible and learn new skills while realizing that there were things out of her control.

Ada moved back home after attaining the title Doctor in Physical Therapy this past summer. She’s going to be focusing on pelvic floor rehabilitation, which supports bowel and bladder to briefly summarize, an area which Ada has grown to see to have a big impact on patients lives.

“There’s a need on Guam and that’s what I want to focus on primarily. Dealing with pelvic floor rehabilitation is a setting that I really grew to love. I realized just how much [pelvic floor] could have an impact on patients well being,” said Ada.

Pelvic floor muscles also support the organs and provide stability at the trunk and aid in sexual activity. Ada also shared statistics that over 50% of women and nearly 15% of men over 20 experience a form of urinary incontinence, but of those are only of what’s being reported.

Ada will be working at Custom Fitness where she’ll be treating pelvic floor disfunction.

While achieving her DPT, Tåsi wanted to dive into a platform that could further connect people to higher forms of knowledge and experiences which inspired her to start her own podcast called ‘Talks with Tås’ that she broadcasts on her Instagram: @gikantontasi.

“I started the podcast for a way to showcase individuals in our region and connect them with people who they wouldn’t have been able to connect with otherwise. That’s what I hope to achieve, whether or not someone listens to it, I learn a lot from these guests so it’s been a great experience for me as well,” said Tåsi.

So far Tåsi has sat and spoke with physiotherapist Peter Hunt, who was her first inspiration to get into the field, Philippines National Weightlifting coach Julius Narranjo, who coached Olympic gold medalist Hidilyn Diaz, physiotherapist Marita Marshall and most recently with coach Gabriela Mueller.

“I’m an avid podcast listener and just thought one day that I tried this out and interview individuals who I felt others could benefit from. It didn’t have to be strictly PT, being a Chamorro women from Guam, and being a sports delegate, I’ve met so many amazing individuals along the way. I figured that I was in a unique position where I have access to that,” said Tåsi.

Tåsi has started taking in patients at Custom Fitness on September 20th to officially get this new chapter of her career started. Aside from moving back home and starting an educational podcast, Ada has gotten into power lifting, a completely new venture for her that she greatly enjoys.

She picked up the sport last December and plans on having her first taste of competition in October.

“I felt like I had to try something different since I don’t plan on competing for rugby and I absolutely love [power lifting],” admitted Ada.

Ada is proving that she’s dedicated to any venture she decides to take on having already accomplished so much in the past few years. Even when she’s treating patients, educating the public with Tåsi Talks or competing in lifting, Ada isn’t planning on welcoming new ventures down the road.

“That’s the beauty of this DPT, there’s so many things you can do and I will never limit myself. I’m always going to be a proponent of women’s health.”