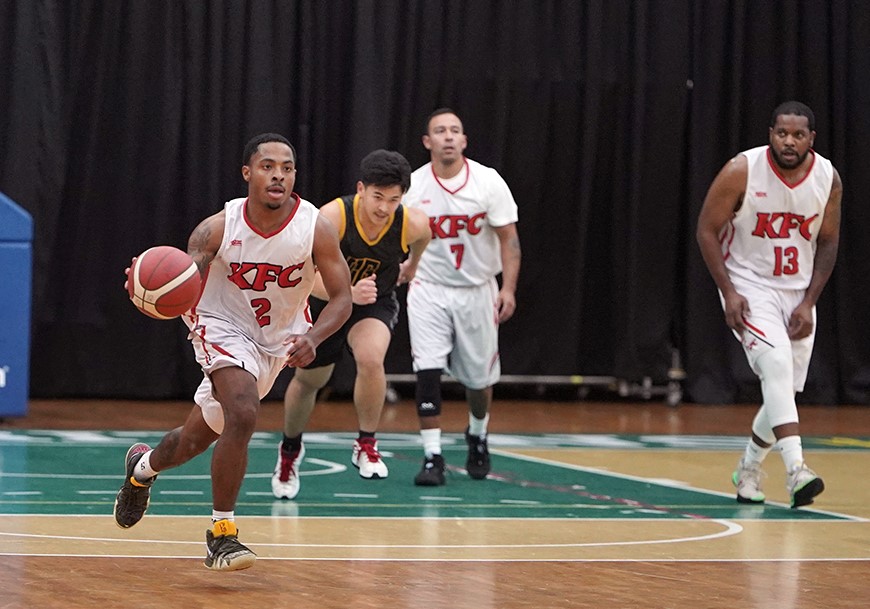 PRESS RELEASE – The KFC Bombers ran over the Triton-KFC Men’s Basketball League during the fall season of 2022 and completed the league with a 123-68 win over Team OG by Hamon Water, Radio, and Ice in the championship game. The Four Stars completed a solid run in the playoffs, with a 3rd place finish in a 76-70 win over MicroFriends.

Jaden Finley led the Bombers with 30 points while Cox added 20 points. Divine Cox was named the league’s Most Valuable Player. AJ Grape scored 33 points for Team OG, with 28 points in the 2nd half and was the only OGer in double figures. The Bombers out rebounded Team OG 96-39 in the game as KFC dominated the boards in the game.

The Bombers averaged 119 points per game during season and scored 100 points in every game of the season. KFC ended the season with an undefeated 12-0 record. Team OG finished the Triton League with an 8-4 record, with 3 of their losses to the Bombers.

In the opening game of the night, the Four Stars won a back-and-forth game with the MicroFriends. The Four Stars started well and led 25-20 after the first quarter but the MicroFiends came back to take a 42-37 at half-time behind 10 points by Ken Brozo in the 2nd period.

The Four Stars finished the regular season with a 1-9 record and was in last place, but the team came-back in the playoffs to win 2 out of 3 games and finished in 3rd place in the league.

The Four Stars finished with a 3-10 record while the MicroFriends was 5-8 in the league.

The Triton League will return in March 2023 with their spring league.