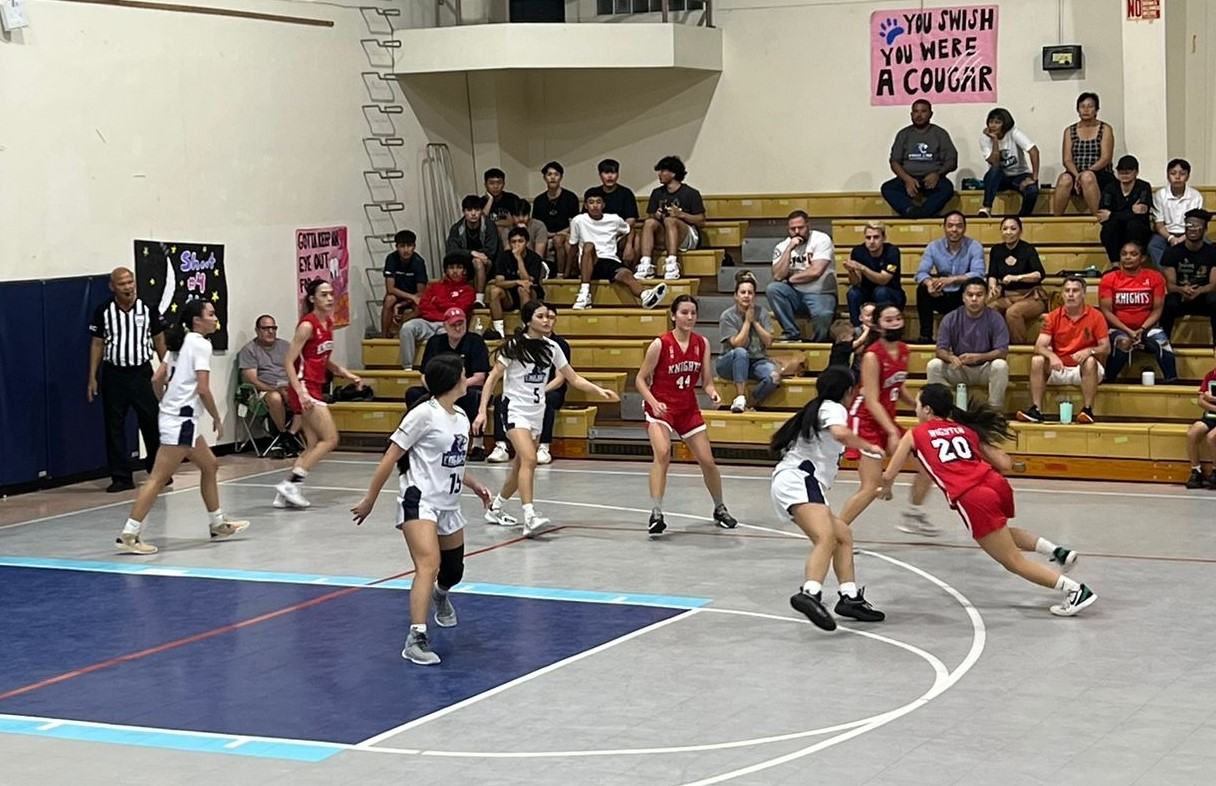 Victoria Rapadas led the way for the Cougars, scoring nine points, six of which came in the second half of the game.

“It feels pretty good right now because we have a raw team,” Rapadas said. “Given that we lost our seniors, we knew it was going to be a tough season, so we dug deep this game.”

The Knights started the game off with a baseline drive to the basket by Jia Peters. On their next possession, Ella Wigsten took an errant pass by the Cougars, found Peters cutting down the lane but was fouled in her shot attempt. Peters went to line, made both free throws, to extend the Knight’s lead 4-0.

After a lay-up by Cougars’ Jeneva Guerrero cut the lead in half, Ally Ungacta found Rapadas on the left corner, for a wide-open 3-point shot, giving the Cougars the 5-4 lead. Peters, however, answered back with a 3 of her own, to regain the lead for the Knights. With the Cougars up 8-7, Wigsten found Serenity Johnson wide open at the top of the key, for a 3-point basket as time expired, to give the Knights the 10-8 lead after one quarter of play.

In the second quarter, both offenses struggled to put points on the board. The Knights were held scoreless in the quarter, while the Cougars scored 6 points off of 3-pointers by Rapadas and Maria-Jean Paulino, giving the Cougars a 14-10 lead at the half.

Both teams, however, managed to get things going in the third quarter, as each side scored 9 points a piece. Madeleine Ada came up big for the Cougars, scoring 5 of the team’s 9 points. For the Knights, it was Peters who led the scoring for her team, putting up 8 of the 9 points for the quarter. The third quarter ended with the Cougars up 23-19.

In the final period of play, Wigsten, again, connected with Johnson, this time, on the right corner of the court, for her second 3-pointer of the game, cutting the Cougars lead to 1 at 23-22, with 6:40 left to play in the game. Later in the quarter, Wigsten stole the ball off the pass, driving three-quarters of the court, hitting a lay-up, to give the Knights a 24-23 lead – their first since the beginning of the second quarter.  The Knights maintained the lead until 1:01 left in the quarter, when Rapadas drove down the middle of the key for a lay-up, to retake the lead, 25-24. The Cougars would get 2 more points from free throws, to extend their lead to 27-24, as time expired. In the losing effort, Peters led all scorers with a game-high 15 points.

“Our coaches helped us stay composed and I tried my best to calm them down, just try to talk to them on the court because if someone lost their composure then everyone would lose their composure, so it would’ve been a domino effect,” Rapadas added.

Waiting for the Cougars are the top-ranked St. Paul Warriors, who knocked out the tough ND Royals 59-42.