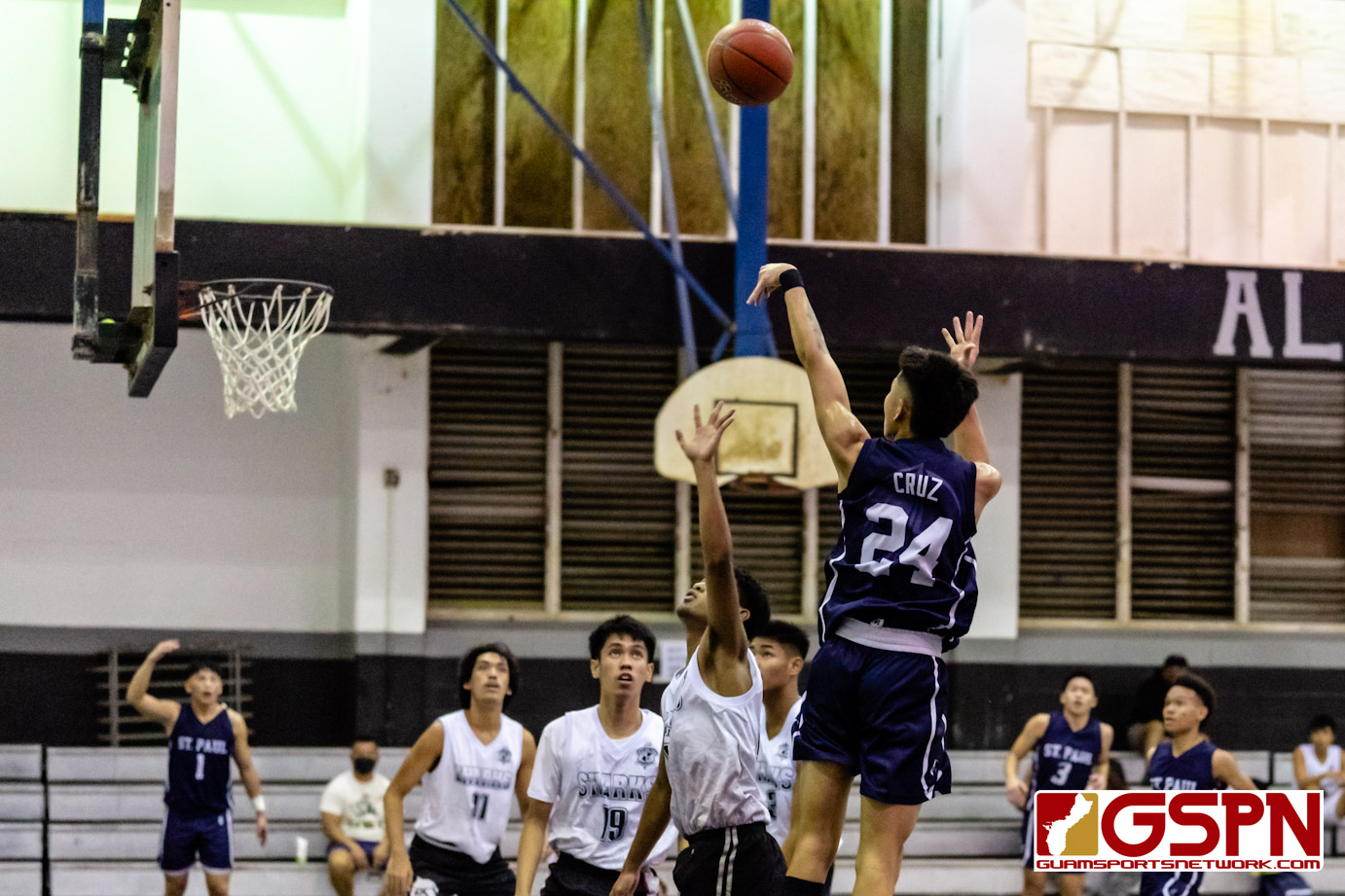 The ISA/IIAAG Boys Basketball Season was finally able to tip-off inter-league play Wednesday after two weeks of postponement as the Sanchez Sharks hosted the St. Paul Warriors. Warriors newest weapon EJ Cruz had a smooth 22 points in the teams 73-52 victory in his regular season debut with his new team.

Cruz wasted no time getting into rhythm, netting the games first bucket on a three right after the opening tip. Cruz would convert twice more from deep as nine of his 22 came from beyond the arc. EJ and the Warriors are well aware of the expectations that come with this team and they are laser focused on accomplishing their goals.

“It’s bittersweet since it’s my senior year and my first gameday [of senior year]. I wanted to come out strong. We all know how big of an opportunity this year is for us and we know how scary this team is. We want to take full advantage and take care of business every game,” said Cruz reflecting on his opening day performance.

Shark Ralph Macaldo scored 18 points to lead Sanchez, doing most of his damage in the paint. Quintanilla added 10 points for the Warriors before exiting the game early in the 3rd with an injury.

The Warriors had captured the GSPN Pre-season Basketball Tournament title in December, but Cruz injured his arm in a game against JFK which kept him out of action for the rest of the tournament. EJ had been rehabilitating since and wanted to get right before the Warriors officially started their run at the 2022 title.

“It was tough. Nobody knows really what I had to deal with and it was more painful than I made it seem. But shoutout to the people who were there for me when I get injured and it really helped me get back; I wouldn’t be here without them,” said Cruz on working his way back.

Sanchez kept it a close contest in the opening quarter trailing just 19-10. St. Paul opened up the 2nd on a quick 4-0 run off of Shark turnovers that immediately forced for an early timeout by Sanchez. The Warriors didn’t slow down as Cruz, Jacob Miranda and Josiah Quintanilla each contributed in the teams 15-6 run to close the quarter making it a double-digit deficit, 39-25, at the half.

The second half featured plenty of minutes for Warriors subs, but that didn’t stop the starters from getting into the cheering action as they were still celebrating every bucket the bench scored.

“It takes all of us. It’s really fun when everyone is getting into it and that’s what we’re about. We’re all going to step up for each other, get each others back and at the end of the day, we’re a family,” stated Cruz on hyping up the bench unit.

St. Paul will travel to Tiyan Saturday while Sanchez will make the long journey down South to take on the ND Royals.