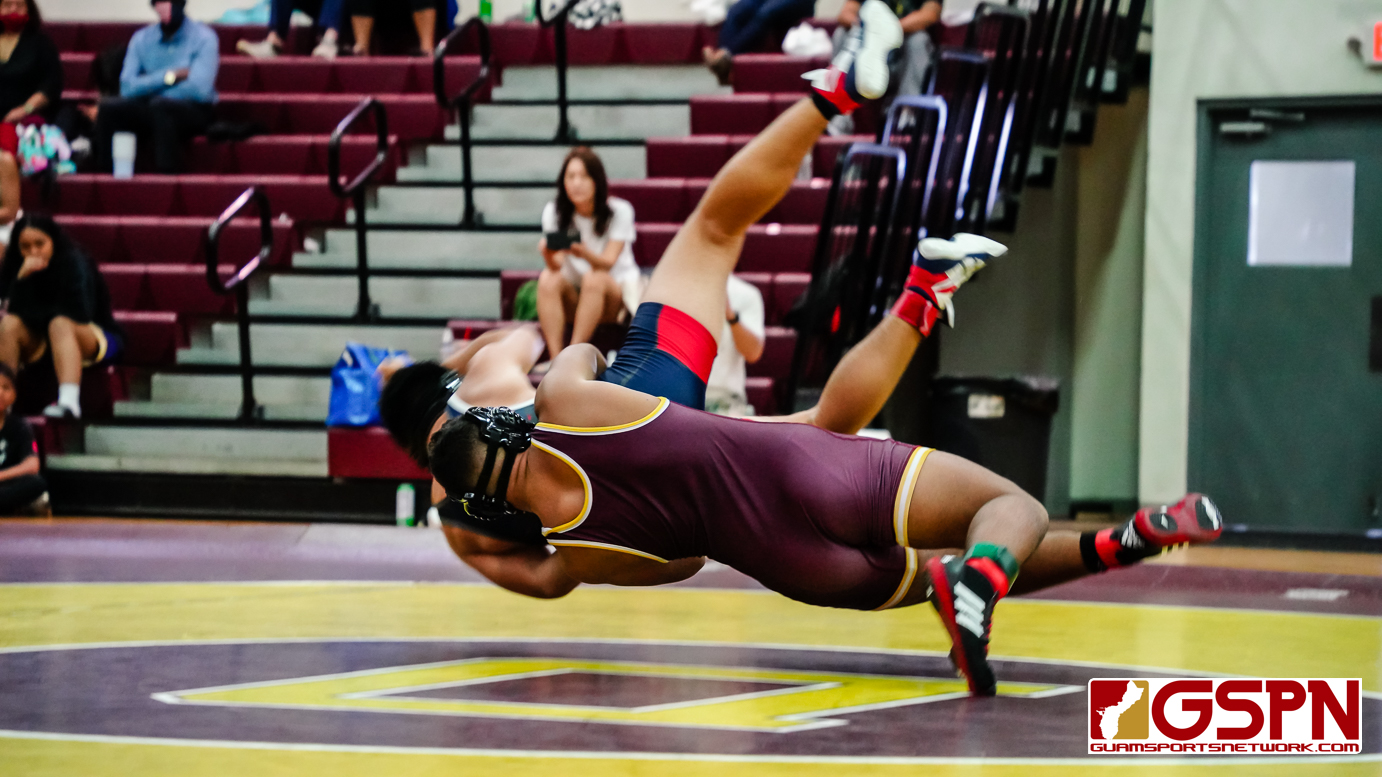 We are two weeks away from the ISA Wrestling all-Island Meet and the defending champion FD/ND look to be the favorites to win it all once again.

The Friars/Royals swept their matches to remain undefeated in the regular season.

The Friars defeated the Okkodo Bulldogs (71-12) and later the Tiyan Titans (52-6) as they head into their final meet of the season.

The Royals defeated the Titans 36-6 to remain undefeated as well.

Tiyan vs Southern
Earlier in the day, the Titans swept the Dolphins in both boys and girls divisions with the boys winning 45-33 and the girls winning 27-16.

White wins by pinfall twice
Makai’la White was able to secure a pin in the 143-lb. division to help the Titans get the narrow victory in her first match.

White went 2-0 for the day, getting the only victory against the Royals. “I believe in my team. We will do well if we practice hard and come in with the right mindset,” said White.

The Tiyan boys were able to garner enough victories via pinfall to hold off the Dolphins 27-16. Dre Aguon remained undefeated in the 160-lb. division with a victory via pinfall.

With two weeks out, the Titans feel they are capable of winning the team championship despite the loss versus the Friars/Royals. “The final two weeks will be interesting because we are going to be hitting (practices) as hard as we can. Our confidence level will rise in those two weeks,” said Aguon. Aguon is now 4-0 for the season, he missed the first week of matches.

“We have a streak going that our brothers and sisters have built for us. It would be a waste if we were not able to win another championship,” said Burgos. Burgos, a sophomore, improved to 6-0 for the season.

Tiyan and FD matched up later in the day and Burgos was excited for the matchup between the two power house teams. “I’m looking forward to meet, it’s going to be a dog fight,” said Burgos.

Captain Eclavea leads the Royals
Aliana Eclavea from ND said a victory over Tiyan would put the Royals one step closer to securing the host rights. “It is important for us because we want to wrestle at our home (FD Phoenix Center) with our mats,” said Eclavea.

Eclavea is undefeated this season and won another match via pinfall vs Tiyan. Wrestling in the 113-lb. division, Eclavea is a senior and has been wrestling since she was a freshman. She is looking to win another All-Island gold medal to add to her resume.

“I’ve been training really hard; since the summer with the Phoenix Wrestling Club. Our team is looking good, we have a lot of new wrestlers and our returnees are moving up,” said Eclavea.

This season, the winner of the girls All-Island Meet will also win the hosting rights for the entire tournament (boys included) which is scheduled for October 15-16. The victory against Tiyan on Saturday puts the Royals one step closer in hosting the big meet.

Southern boys defeat Okkkodo
The Dolphins did not go home empty handed after defeating the Bulldogs 51-24. Tyler Crisostomo, Jhavin Maniebo and Richard Borja each got victories via pinfall.