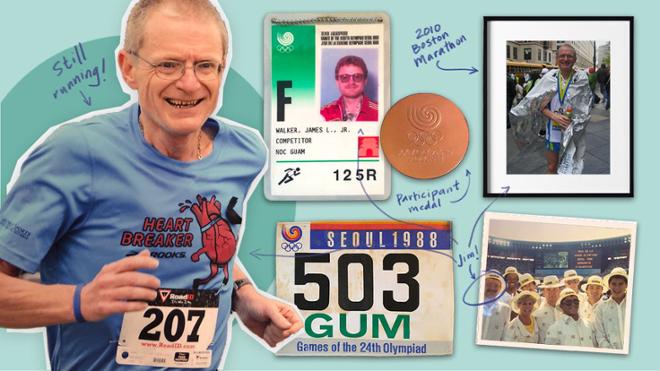 After getting married in 2000, my wife (Emily) and I left Guam for Massachusetts where I wanted to be closer to my parents. We immediately resumed our careers: me in insurance claims; my wife in teaching.

I continued my running and was still able to race marathons consistently between 3:15-3:19 through my mid 50’s. Like many, I encountered health problems and can no longer run.

I gained a desire to return to Guam after my retirement in 2018. Earlier this year when the island opened up more to visitors we booked our trip. My excitement peaked as we walked out from the airport.

I did not forget the major roads 22 years later while driving around in our rental because of the years of running on Guam. I saw lots of building changes whether newer businesses replaced storied ones, brand new structures and very tired looking buildings, perhaps due to the pandemic and other economic changes.

I was disappointed to drive by a couple of schools one morning only to find their gates locked which made me wonder how can the locals train on the track. Back in the day, I was able to train on the JFK track without incident. Oh well, there may be another side that I haven’t considered so no further comments.

Just about everything else was positive and special. I was able to meet up with some friends. We enjoyed fabulous food at Guam restaurants and we eagerly ate some local foods which we don’t get in MA. We drove around the southern loop and the views were as spectacular as ever and definitely world class. We were able to be still and enjoy multiple sunrises and sunsets on the island.

‘I feel complete with this visit.’

I have always been thankful to have been a member of Team Guam at the 1988 Seoul Olympics. I tried my best to give back including being Guam Running Club President for three years and being an officer of the Guam Track and Field Association.

As we leave, Guam remains a special place in my heart, and, I will continue to promote Guam wherever I may be.