FRIARS COME BACK FROM TWO SETS DOWN TO UPEND EAGLES 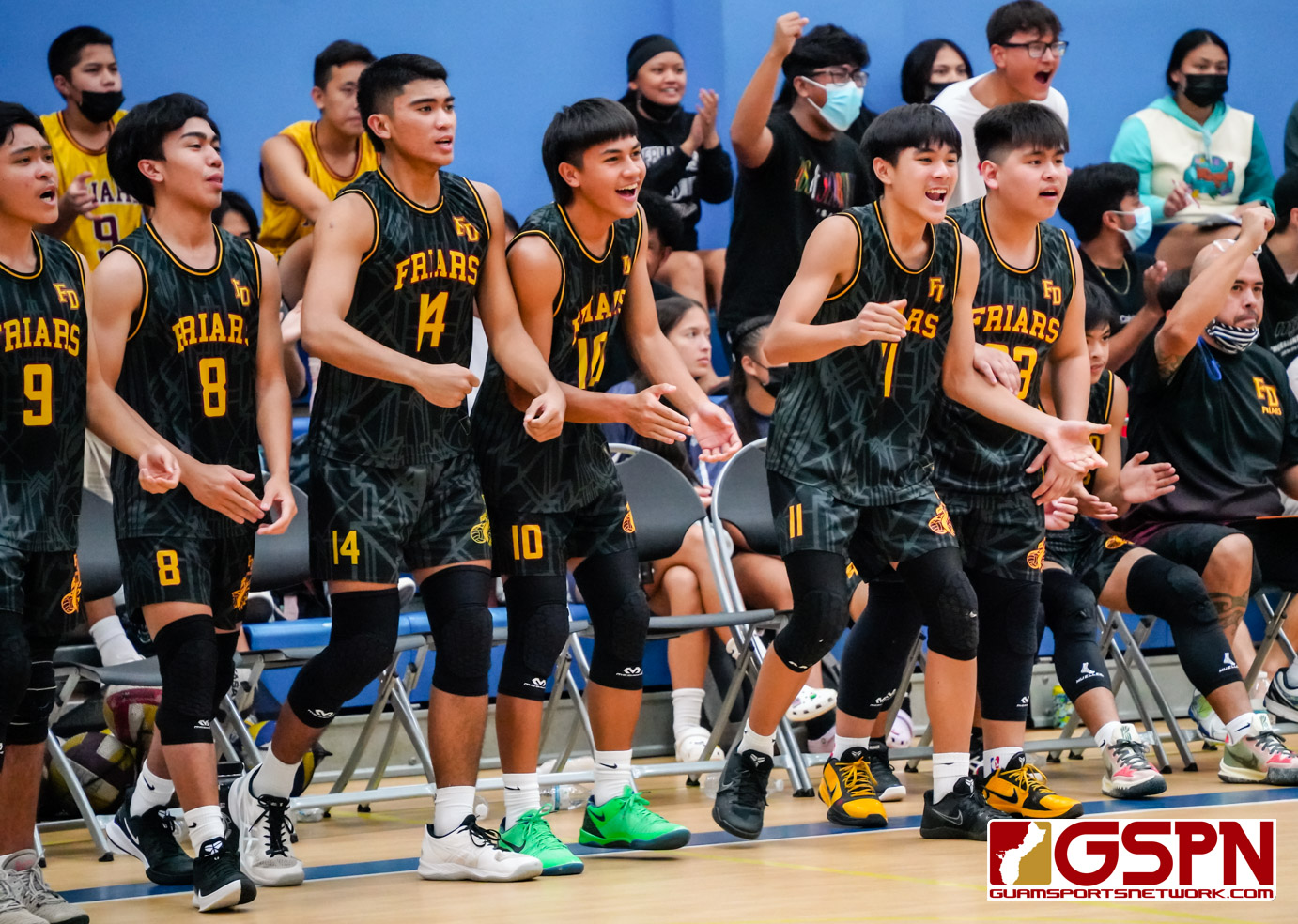 FD outside hitter Gabriel Sarmiento came up big for the Friars finishing the night with 15 kills, 10 of which came in the last three sets of the game. The Friars also had big offensive production from Ethan Alvarez and Joseph Mafnas who had 10 kills a piece with Mafnas adding three big blocks.

The Eagles started the night on fire behind huge back-to-back kills from outside hitter Wes Keith to give his team the early 5-2 advantage. But the Friars took advantage of multiple errors by the Eagles tied the game up at 9-9.

The lead would change hands multiple times throughout the set and after three straight errors by the Eagles, the Friars tied the game up at 22 apiece. A service error by the Friars followed by a kill from Hoben Barcinas tied the score up at 23. But back-to-back kills from Keith and teammate Brian Xia would give the Eagles the first set victory.

In the second set, the Eagles again came out swinging and jumped to an early 4-1 lead behind two kills from Keith. The Friars, down 6-4, would make a little run of their own scoring six straight points behind four kills, an ace and a block to give the Friars a 10-6 lead.

After multiple back-and-forth possessions the Friars found themselves up 21-19. The Eagles scored three straight points behind a huge kill from Keith to give the Eagles a slim 22-21 lead. With the score knotted up at 23, a kill by the Eagles Traven Ka’ae followed by a passing error on the Friars gave the Eagles the second set victory 25-23.

The third set was no different for the Eagles who looked poised to hand the Friars their first loss of the season starting off red hot behind two kill from Keith for a 5-1 lead. The Friars down 9-6 went on two separate runs of five and seven straight points to give the Friars an 11-9 lead and later extending the lead to 19-11.

The Eagles managed to put a run of their own scoring five straight points to cut the Friars lead to 19-16. The Eagles would go on to score their next three points off a kill by Keith to bring the score to 22-19. The Friars, with the obvious momentum shift, would add two more points to put them on the brink of winning the third set 24-19.

A brief delay in the game caused by an issue with the lineup put a halt to the Friars momentum and after things were sorted out, a substitution violation would give the ball back to the Eagles with the score now 24-20. The Eagles would go on to score the next three points and looked ready to hand the Friars their first loss in what seemed to be another shift in momentum but it was the Friars Sarmiento who would have the last say by recording his eighth kill of the night to seal the third set and keep the game alive for the Friars.

“I just told my teammates to pull ourselves together, get our head straight and focus up…this game’s not over. And we pulled it off.”

In the fourth set, both teams exchanged points early on but it was the Eagles who looked as if they managed to steal back the momentum from the Friars’ third set victory scoring their first seven points from four kills, an ace and two errors committed by FD. But things would quickly change as the Friars went on two huge runs outscoring the Eagles 20-2 behind four kills and a block by Mafnas, three kills by Sarmiento and two kills by Edward Acda to give the Friars the 25-9 fourth set victory.

In the fifth and final set it was all Friars. Up 9-5 on the Eagles, FD scored the next three points off kills by Sarmiento (2) and Acda to extend their lead to 12-5. The Eagles down 13-6 would go on to score their final two points of the night from a kill by Keith and an ace from teammate Raito Atsuta. The final two points for the Friars would come from Mafnas’ third block of the night followed by a hitting error from the Eagles to keep the Friars unbeaten at 9-0 with one game remaining in the regular season.

“One of the things we do know is that our boys are in great shape. So, if anyone gives us a chance in the long game, we have full confidence in our boys playing five full sets.”

“We push these guys and they sacrifice. They come in and do two-adays, early mornings…so they come out and sacrifice because if we ever lose a game it’s not going to be because they were tired.” Crediting the success of the team to head coach Steve Pangelinan’s program, “He runs that program and the boys just follow it, they buy into it and tonight it showed.”

The Friars host the Guam High Panthers this Thursday in their final regular season game. The Friars look to remain unbeaten heading into the playoffs as they look to win their fourth straight IIAAG title.

CRUZ LEADS BALL STATE TO #2 IN THE COUNTRY
WARRIORS WALK ON TO SEMIS
Loading Comments...