WARRIORS WALK ON TO SEMIS

St. Paul sets up match up with FD 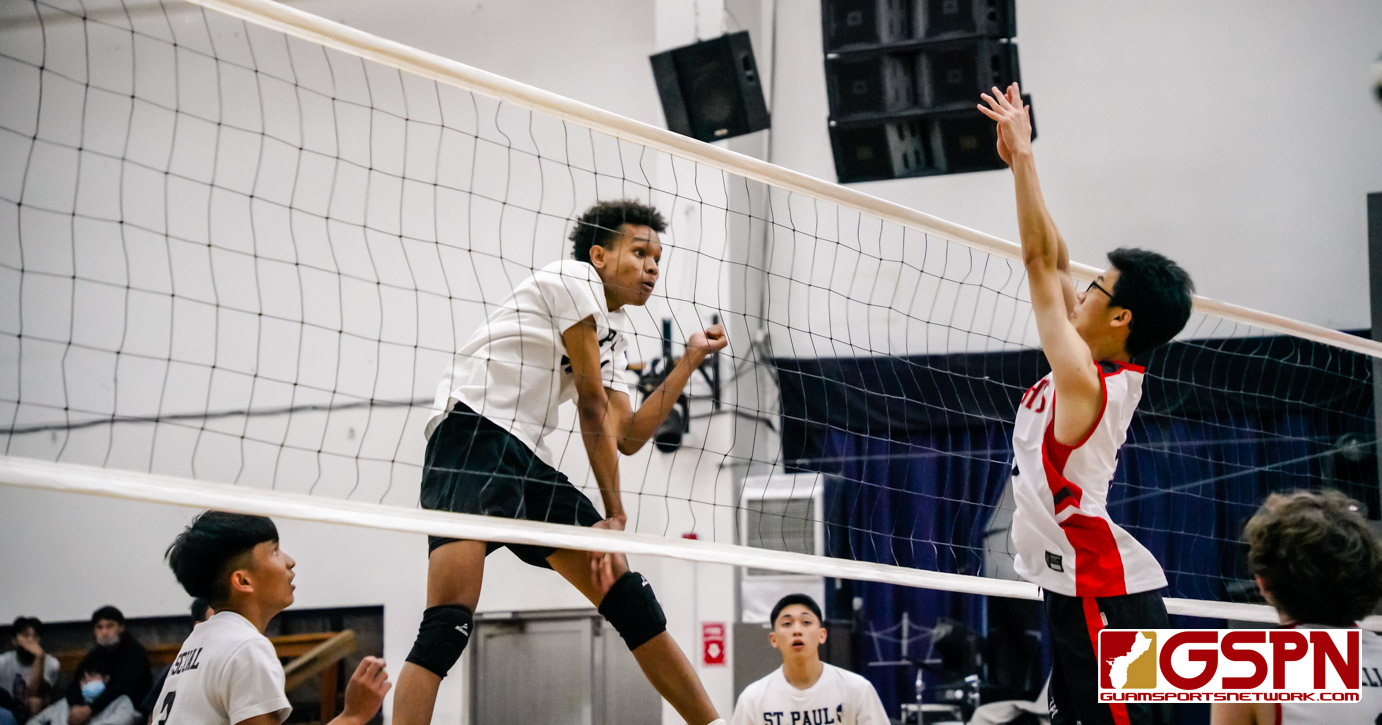 The St. Paul Warriors are moving on to the semifinals game in the IIAAG Boys Volleyball League after defeating the visiting St. John’s Knights in four sets 16-25, 25-12, 25-23, 25-21 Tuesday night.

Charles Jackson and Rui Ventura combined for 25 of the team’s 39 kills to lead the Warriors offense. Setter Raven Pascual received a lot of credit for putting the duo in position for their one-two punch.

Coming off a defeat at the hands of the Warriors Friday night, the Knights began the first set scoring four straight points behind a kill by Cameron Kelley and multiple errors by the Warriors. Later, teammate Erren Chen hit back-to-back kills to give the Knights a 25-16 first set win.

The second set was a different story as the Warriors began to find their groove. With the score tied 9-9, the Warriors scored seven straight points off multiple errors by the Knights with the Warriors Izaiah Ravela rounding out the run with a kill and block to extend the lead to 16-9. St. Paul went on to outscore St. John’s 9-3 to take the second set 25-12 behind a kill from Ventura who ended the set with a block.

“We started to gain our composure and started to work as a team,” said Ventura on his teams turnaround from the first set.

“I told my team we got to start thinking positive after being down big in the first set.”

Heading into the second set, St. Paul head coach Jenz Sabangan stressed that the most important thing that needed to change was their mindset. A message Ventura and company took to heart.

In the third set, the duo of Ventura and Jackson went to work powering the Warriors offense with 11 of the team’s 15 kill in the set. The lead changed hands a few times in the beginning, but trailing 15-13, the duo went to work on an 8-1 run behind six kills by the pair. Down 24-19, the Knights would make a run of their own scoring the next four points with three straight kills and an ace which cut the deficit to 24-23. The drama would end, however, on the next play as the serve fell short giving the Warriors the set 25-23.

In the fourth set, the St. Paul one-two punch continued to be locked in jumping out to an early 6-4 lead behind a kill from Ventura and three straight kills and a block by Jackson. Down 10-8, the Knights would go on to score four straight points behind kills from Aidan Johnson and Kelley to breath life into their offense and forcing the Warriors to call a timeout with the Knights leading 12-10.

“We still had the momentum from the last set, so our coach told us to keep pushing,” said Jackson.

A St. John’s hitting error on a kill attempt would end the game and the season, sending the Warriors into the semifinals game this Friday. St. Paul travels to Mangilao to take on the undefeated FD Friars at 6 pm.

Jackson attributed the duo’s ability to effectively execute on offense to the team’s passing. “It all starts with passing,” said Jackson. “Passing is the most important thing. Without passing, Rui (Ventura) and I wouldn’t be able to hit.”

Looking ahead to the semifinals match, Jackson stressed the team’s need to play the best defense they can because, “defense wins games!”

FRIARS COME BACK FROM TWO SETS DOWN TO UPEND EAGLES
CRUZ: NATIONAL COACH OF THE YEAR
Loading Comments...