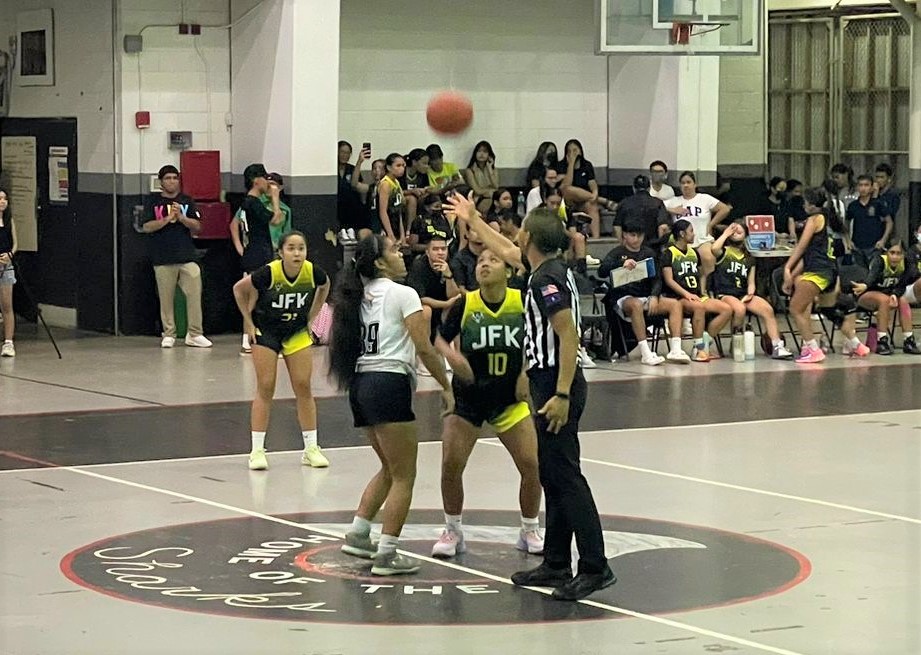 The ISA Girls Basketball League defending champion JFK Islanders are off to a riveting start after defeating the Sanchez Sharks 61-44 Monday night in Yigo.

Jada Han led the Islanders with a triple double. Han had 17 points, 10 rebounds and 10 steals despite having to sit a good chunk of the game due to foul trouble. Han also dished out five assists to stuff the stat sheet.

“I honestly was not aware that I was even close to it (triple double). I didn’t really play much in the second quarter so I really wasn’t thinking about that,” said Han. Laila Smartt had the hot hand on offense and had a game-high 18 points. The Islanders improve to 2-0 while the Sharks fall to 0-1.

Opening Quarter
Han picked up two quick fouls but head coach Merwin Martin had faith in his star player and left her in the game. The Sharks game plan was to move the ball around and find open shots.

Zyla Soriano found herself open for the Sharks and made two early three-pointers to go ahead 9-3. Sharks point guard Ronafe Ollet played quarterback and dished out five assists in the first half as the Sharks bit first.

The Islanders come out of the locker room on a mission and it was Smartt and Jodee Halili leading the charge. Hannah Gogue hit a three-pointer to cap an 8-0 run which forced Sanchez head coach Arvin Domingo to call a timeout.

The Sharks survived the early second half onslaught and turned to Ollet who hit to short jumpers to put the Sharks back ahead 31-28.

Franchesca Aguilar and Smartt closed out the third quarter on another JFK run and the Islanders went ahead 39-34. “Our coach told us at halftime to settle down and play our game. We were shaken up in the first half and we need to get things together to improve,” said Han.

The Islanders put pressure on the Shark guards and forced more turnovers, pulling away for the victory in the final period. Han had three steals in the final quarter to give her the triple-double.

For the Sharks, it was a tough loss to suffer on their home court but they got the respect of the Islanders and showed they will be a tough team come playoff time.

In the junior varsity game, the Islanders won 48-37. Mylie Navarro scored a game-high 18 points for JFK; Anastaiszia Santelices had nine points for Sanchez.