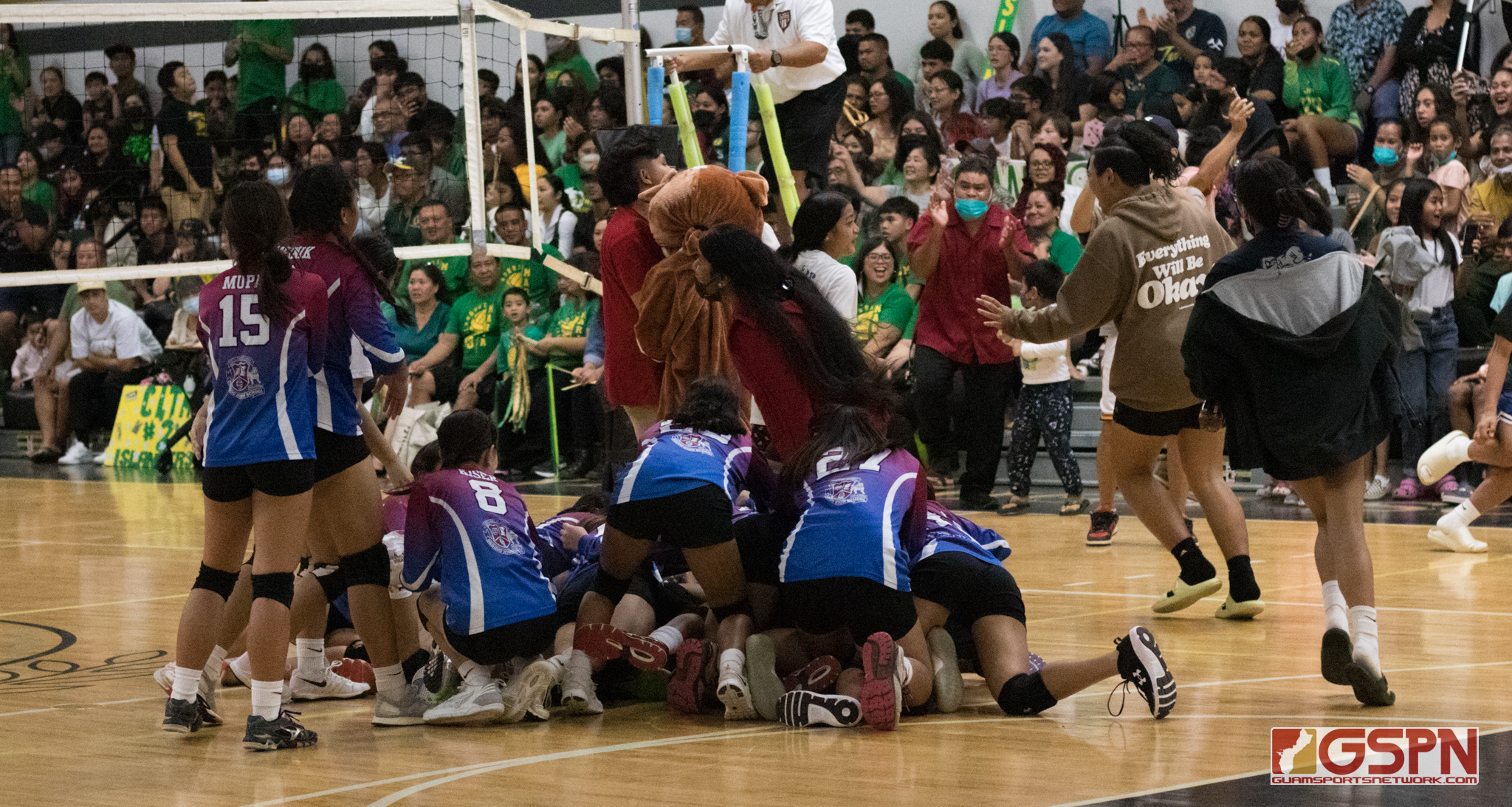 Although they were the top seed coming into the playoffs, the Bulldogs were still a heavy underdog in the title game as a GSPN poll had 67% of fans picking JFK to win it all.

Meinik credited her teammates as the motivating factor for her performance in the championship game. “My teammates kept hyping me up and telling me not to give up when I wasn’t doing good,” she said.

Garcia, after having contributed at a high level to her team’s success, concurred with Meinik. “My teammates were definitely my motivation,” she said. “My mom especially because she is my biggest supporter and is at every game, but for my teammates, I just didn’t want to disappoint them because I know I have the capabilities to show up and do exactly what I did in this championship game.”

The Tiyan gym was filled to capacity with both sides of the gymnasium dawned in the teams’ school colors while a line of spectators remained outside with the hopes of being able to enter the gym to cheer on their respective team.

Asked if the atmosphere contributed to pregame nerves Meinik said, “I was nervous, but I tried to keep myself calm and humble.”

The Bulldogs setter and senior Jasmine Samson, playing in her first volleyball championship game, was not fazed at all by the energized crowd.

“We’ve been having a lot of spectators lately and we’ve been doing a good job drowning them out and playing and staying focused on our own game,” said Samson. “I feel like it was harder this game to drown out the crowd, but we just kept our focus and made sure to do what we had to do.”

JFK started off the game where they left off in the semifinal upset win over GW with a kill by Maya Andres, who continued to add to her postseason stats.

But on the ensuing plays, Meinik took over, scoring the next three points with a kill, a block and a tip that found the open floor to give the Bulldogs the 3-1 lead early in the set.

With the score knotted up at 4-4, Meinik’s fourth kill of the game would spark a 6-0 run for the Bulldogs with a tip by Garcia and a kill from Sharma Taiuwei to put the Bulldogs up 10-4.

With Okkodo looking to pull away, now up 16-6, the Islanders offense came storming back putting on a 9-0 run of their own behind two kills from Tommie-Lyn Santos and kills by Andres and Jodee Halili to bring the score within one point at 16-15.

But the Bulldogs would respond with Muna’s back-to-back kills and ending their 5-0 run with back-to-back aces from freshman libero Rihanna Estoy to put the score at 21-15.

After Meinik earned her fifth kill of the set, Muna would serve up two straight aces to give the Bulldogs the 25-18 first set win.

With the momentum from the first set win and the energy from their fan base, the Bulldogs jumped to a 6-3 lead with Meinik scoring her sixth kill of the game and Garcia adding two kills.

Things would change, however, as the Islanders outscored the Bulldogs 13-3 to give JFK the 16-9 lead halfway through the set. JFK’s Alessandra Pagdilao led the way for the Islanders scoring three kills during the run.

Both teams would struggle a bit through the set committing multiple hitting and service errors until JFK’s Halili scored two straight kills to give her team a 23-17 lead and a renewed sense of energy that was lacking in the first set.

Even with the second set loss, the Bulldogs continued to stay focused as an ace by Rihanna Estoy and Meinik’s 10th kill put the Bulldogs up 4-0 early in the third.

Both teams began to find their groove as they traded leads with JFK’s Pagdilao notching her seventh and eighth kills to tie the game up at 15-15.

But the Bulldogs would go on a 6-0 run behind Garcia, who came up big by scoring three straight points during the run with two kills and a block to give her team the 21-15 lead.

The Bulldogs continued to get big time production from Garcia who, with her team up 23-19, recorded her eighth and ninth kills to give the Bulldogs the 25-19 third set win.

In the fourth set, the Islanders got their second wind as the offense displayed flashes of teamwork and chemistry that got them to the championship game.

Aika Kanekatsu, coming off the bench, came up big with three kills early in the set to help build a 6-3 lead.

With JFK up 12-7, Islanders went on an 8-1 run with Kanekatsu tallying up the kills with three more during the run to include two huge blocks to extend the lead to 20-8, leaving the Bulldogs frustrated.

Halili would put an end to the set serving up an ace to give the Islanders the fourth set win and forcing a fifth and final set to determine who would be crowned the new ISA girls volleyball champions.

The Bulldogs could not seem to find their groove throughout the set as all their fourth set points were gained from errors committed by JFK.

With the momentum clearly on the side of the Islanders, Bulldogs head coach Ruel Estoy huddled with his team to get them back on track.

“During the set we decided to take (the starters) out and let them rest,” said coach Estoy. “It didn’t look like we could come out of it and so we took the starters out to take the tension off of them.”

Coach Estoy credited the Islanders defensive abilities as a major reason for his team’s frustrations throughout the game.

“Look at JFK, their hard-press defense of chasing the ball and making sure it never dies easy, look how many times they came back,” said coach Estoy. “That is so frustrating for a team that is looking to try and kill the ball right away. And every time JFK did that, that’s why you cannot look at them and say they didn’t do a good job. They did an excellent job tonight, because they never let a ball die easy and that I think frustrated my team the most.”

“Honestly I knew that everyone was feeling down so when I got subbed out I made sure I picked everyone back up and I made sure that in the fifth set we all had high hopes and they didn’t let the rest of the game affect us,” added Samson.

In the fifth and final set of the championship game, the now refocused Bulldogs returned to business.

Meinik, after struggling during the previous set, went to work early for the Bulldogs recording a kill, a block and an ace to give her team an 8-3 lead.

The Islanders would strike back with three straight points of their own after a kill by Kanekatsu was followed up by back-to-back aces from Andres to cut the lead to two at 8-6.

But the Bulldogs offense would strike again and strike hard scoring their next five points from two straight kills from Garcia, an ace by Taiuwei and back-to-back kills from Muna during a 5-2 run that put the Bulldogs up 13-8.

With history knocking at the Bulldogs door, it would be two consecutive errors by the islanders that would give Okkodo the points they needed to propel them into the history books, giving them the 15-10 fifth set win and their first girls volleyball title in school history.

“I know that my team put in the hard work and we had to live with our mistakes and grow from it, so it feels absolutely amazing knowing that my team deserves it,” said Garcia.

“It feels really good to know that we worked really hard all season and to get what we worked for basically,” added Rihanna Estoy.

The Bulldogs pulled off a Cinderella season as the team finished the season last year in last place.

“I am very surprised and proud at the same time. You know it could’ve gone either way going five sets. But from being in last place last year to winning the school’s first girls volleyball championship, I am very proud of the way the team played today.”

The Bulldogs combined for 34 kills to which Samson, the team setter, credited the passes from her freshman teammate for her ability to set up the Bulldog hitters.

“Oh my gosh all season, not just the championship game, all season she’s been giving me the best passes, the passes that I need to set up really good plays,” said Samson referring to teammate Rihanna Estoy. “Honestly, I loved having her this year and I hope that she does really good in her next three years”

“I’m very proud of her, being that she’s a freshman and I’m very proud of the team most especially for accepting her to play that role…and I’m really proud they supported her,” said coach Estoy.

“But in all retrospect toward the team, our number one goal was to go straight to the basics so controlling the ball for our passes,” he added. “We don’t want to be in trouble, so we’ve emphasized the pass to our setter. So, if the libero takes the free ball, her job has to be making sure the setter’s not struggling.”

“Honestly, she has a lot of good things ahead of her and I’m so proud of her,” said Meinik. “I believe that if she continues to push herself and not give up, and continues to play how she plays on the court that she will be very good.”

The Bulldogs look forward to next year in hopes of being able to defend their new title and repeat as champions.

“Next year, I’m hoping the same girls who are on the team, will come out again,” said coach Estoy. “We’re hoping we can maintain the program and that they come out and we can build up the program more since we have some freshmen on the team right now.”

In the losing effort, the Islanders Pagdilao, Kanekatsu and Santos all contributed with nine kills each, with Pagdilao adding an ace and Kanekatsu with three blocks.