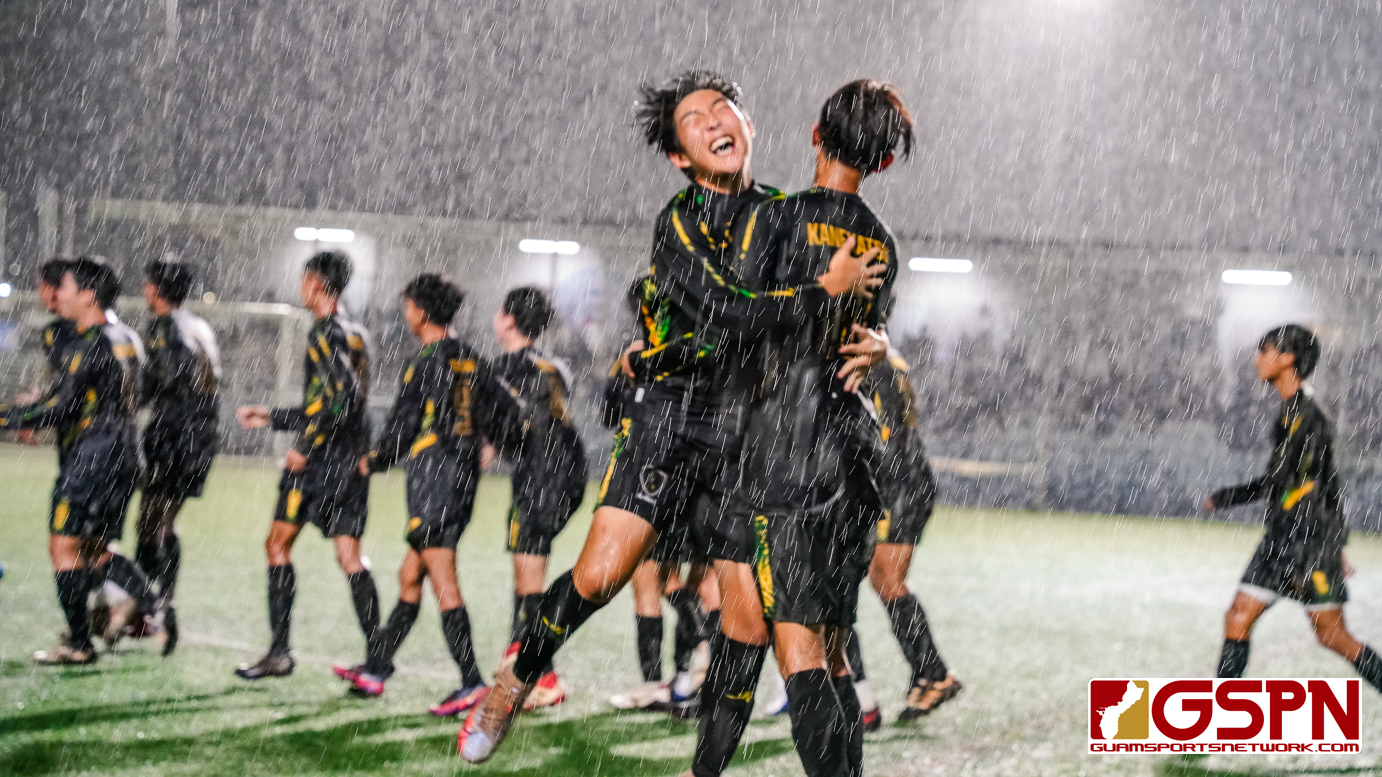 The dynasty continues as the JFK Islanders won their third straight ISA Boys Soccer League championship on Friday night. The Islanders were down early but rebounded to defeat the Southern Dolphins 4-1 at the Guam Football Associations National Training Stadium in Harmon.

The win is the sixth in the last 10 years for the Islanders under the tutelage of head coach Lad Manansala. Manansala said he is continued to be blessed to have awesome kids at JFK.

The game was played under wet conditions with rain soaking the field and the players for the entire contest. The Dolphins were looking for the upset win with All-Island players John Paul Taimanglo, Landon Castro and Cody Pangelinan looking to lead the Dolphins.

Southern strikes first
The Dolphins were hyped entering the game and scored first with James Trecepona finding the back of the net just eight minutes into the contest.

JFK was stunned early but did not panic and slowly crawled their way back into the game with ISA Co-MVP Taiyo Kanekatsu and Bryan Nakamine making plays to set up their teammates.

JFK’s Josh Benavente found an opening but missed left in the 15th minute. Benavente got a second chance and tied the game at 1-1 in the 24th minute.

The Islanders had momentum behind them and scored again as Noah Medler scored from the right side as JFK went ahead 2-1 at halftime.

Benavente would add an insurance goal in the 46th minute to go up 3-1. The fourth and final goal was scored by Rhenan Sagun which came in the 82nd minute. Shortly after, the celebration started with the Islanders doing a victory at the stadium.

Defense was key in the second half for the Islanders with goalkeeper Leeland Reyes stuffing Southern’s attempts.

Benavente, a senior, said the teamwork deserves all the credit. “This win is very special. I can’t thank my team enough, I was gone for half the season but they did the hard work and played their hearts out,” said Benavente.

The Southern fans stayed and joined their team on the field despite the rainy weather conditions. It was a tough pill to swallow but the Dolphins and their supporters were proud of their performance this season.

A humble Medler gave credit to the Dolphins and commended them on a great season. “They came to play tonight. Throughout the whole season, they got better and progressed really well,” said Medler.

The Islanders combated the early Dolphin attack and relied on their stars to make plays to restore their confidence. “We are a second half team. We do okay in the first half and then we come back really hard in the second half,” said Medler.

“This means so much to me. I didn’t play my first three years because I injured both my legs. So to go out like this, in my senior year, is really special,” said Medler.

For Benavente, this is his third year in a row as champions. The seniors hope the underclassmen can keep it going and win against next season. “I’m a senior and I hope to see my teammates keep the legacy going,” said Benavente.