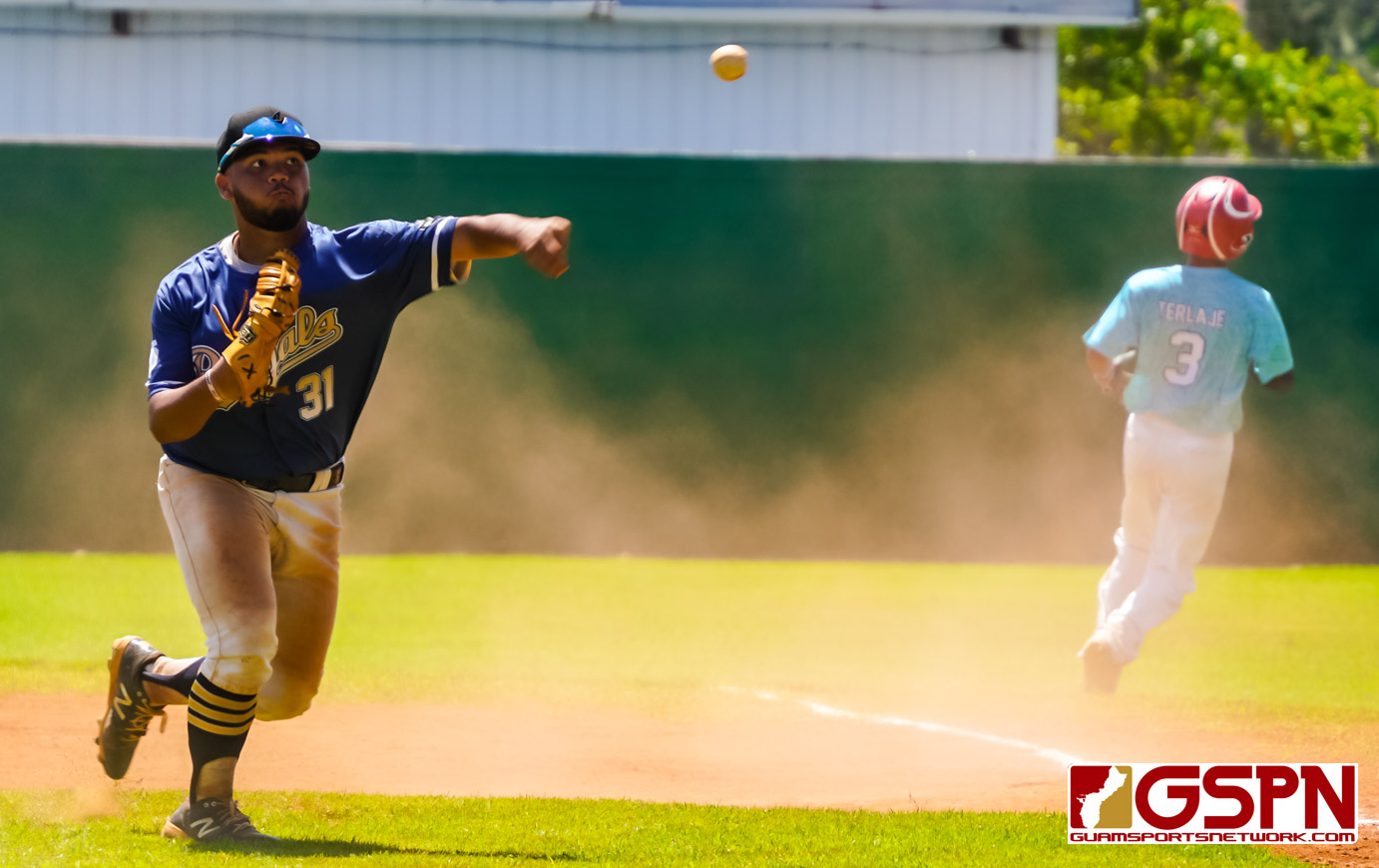 The Notre Dame Royals knocked off the Southern Dolphins from the ranks of the unbeaten in the ISA High School Baseball league Saturday afternoon at Paseo Stadium. The Royals Zhavier Panes scored the winning run in the bottom of the seventh inning to defeat the Dolphins 6-5 improving their record to 4-1 and creating a three-way tie atop the league standings with Southern and Father Duenas also at 4-1. The GW Geckos is right behind at 2-1-1.

“All I saw was coach waving me home and realizing that it was over I had to end it in style with a slide,” Panes said about his winning score.

Royals starting pitcher Rick Leon Guerrero and relief pitcher Nolan Cruz combined for 11 strike outs in the game. Cruz was the winning pitcher for the Royals.

In the bottom of the first, Dominic Cruz Jr. singled to left field followed by a base-on-balls by Nolan Cruz. Up next Leon Guerrero batting cleanup, hit a two-run blooper to right field scoring both Cruz’s and giving the Royals an early 2-0 lead. Leon Guerrero then got thrown out at third following a flyout to left field by teammate Kyle Yoon to end the inning.

After a scoreless second inning, the Dolphins managed to put two runs on the board in the top of the third as an errant throw to home plate by the Royals scored Marko Parks. Christopher Sablan then hit a shot to left field scoring Terlaje to even up the score at 2-2. Two batters later, Leon Guerrero recorded his fourth strike out of the game to end the inning.

An RBI triple by Leon Guerrero over the left fielder in the third inning had ND regain the lead 3-2.

Both pitchers took care of business in the fourth retiring both sides in order with Leon Guerrero striking out the top half for a total of seven strikeouts for the game and the Dolphins Sage Reyes striking out the third Royals batter in the bottom half of the inning for his second strikeout of the game.

In the top half of the fifth, the Dolphins bats came alive. With a base hit by Trevor Chaco and a fielding error, allowing Jovin Terlaje to reach base, Dylan Rodeo sent a deep shot to left field for a two-run double to give the Dolphins their first lead of the day 4-3. Christopher Sablan then sent a 1-2 pitch into centerfield scoring Rodeo from second and extending the Dolphins lead 5-3. Leon Guerrero walked the next batter which prompted the Royals to make a pitching change with no outs.

Nolan Cruz came in for the Royals with runners on first and second, struck out the first batter and later picked off the runner at first for the second out of the inning. But a hit-by-pitch followed by a walk loaded the bases for the Dolphins. Cruz then got Traven Pangelinan to line out to the second baseman to end the threat and preserving the deficit at 5-3.

ND scored two unearned runs in the fifth to eventually tie it up again at 5-5.

In the top half of the seventh, Nolan Cruz faced four batters recording two strikeouts with his fourth strikeout to end the Dolphins at-bat.

Panes led off the bottom half of the inning placing a bunt down the third base line and beating out the throw for an infield single.

“My focus was just to put the ball in play,” said Panes. “To see as many pitches as I can and just do anything to help the team.”

‘My coach told us we need to show who wants it more and to play hard and that’s what we did.”

Panes then stole second base putting the Royals in scoring position with no outs. Dominic Cruz at the plate for the Royals attempted to move Panes to third via sacrifice bunt but both attempts were fouled.

With the count at 1-2, Cruz then hit a line drive to short for the out. The shortstop, in an attempt to double up Panes who was off the bag, overthrew to second base allowing Panes to head to third. The right fielder misplayed the ball allowing Panes to round third and head for home. The throw to the plate was not in time as Panes slid at home plate scoring the winning run.

“It was a great team effort today. Our outfielders, most are new to the team, did really good. They played their part and helped us out bigtime.”