Passion for the sport of rugby is on display everyday for the likes of Joaquin Rivera, who’s found a home in the Cal Poly Club Rugby Team. 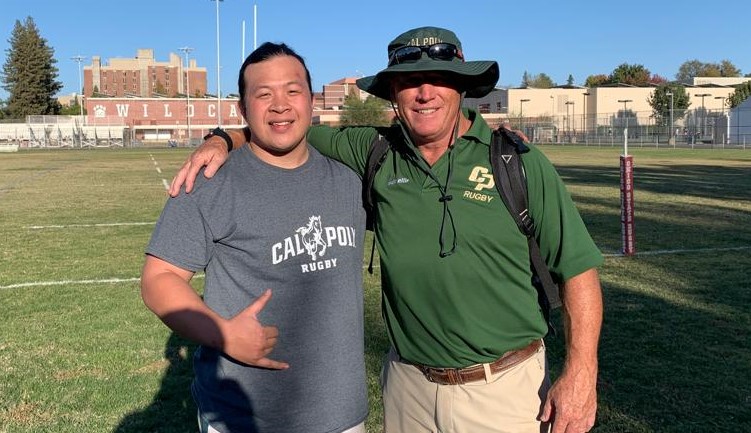 2019 FD Friar graduate Joaquin Rivera knew exactly what career he wanted to dive into in high school: computer engineering. His decision on a career path heavily influenced him choosing to attend school at California Polytechnic State University (Cal Poly), where he’s set to graduate in 2023.

Before selecting a career and college, Rivera was told by one of his rugby coaches in Lenny Calvo that he was good enough to get into the collegiate rugby scene. Rivera ultimately decided to put his career objective first while committing to Cal Poly, but his love for the game of rugby was strong.

“I ultimately decided to continue playing rugby in college for the love the sport, but it also gave me the chance to represent the island,” said Rivera on making the commitment.

So strong in fact that Rivera was already contacting the coaches of the Cal Poly Club rugby team about how he could get involved before even visiting the campus.

“When I first stepped on to the field there were only a few players and I wasn’t sure if there was even a team,” said Rivera upon his arrival to the Cal Poly rugby team.

What Rivera didn’t know was that the team was training for their summer program of Rugby 7’s which he got roped into playing. Cal Poly rugby goes through a league of 7’s over summer before preparing for their preseason 15’s that go from September to December. Their official season begins January where they play until March.

Rivera was immediately exposed to a different level of rugby.

“The play style is night and day. My level of rugby knowledge was at about 50% back in high school, which has expanded to like 85-90% now,” said Rivera on college rugby compared to high school.

It took Rivera the entire preseason to get over the learning curve of playing rugby at the next level with a team made up of athletes who were stars in their respective schools.

“Cal Poly doesn’t do any recruiting for rugby so the team is made up of a lot of former star athletes,” said Rivera.

Joaquin transitioned to the hooker position where he and his hair started to grow. Rivera has now become a vital part of the team in just his third year as he plans to continue the club rugby circuit up until his destined 2023 graduation.

Members on the Cal Poly Rugby team are there on their own accord, but schooling is still the main priority. At this juncture, it’s clear that Club Rugby players are playing for the love of the sport.

“There’s just something really different about the sport,” said Rivera on his love for ruby. “For a lot of us playing rugby at this level is just an added bonus.”

Rivera said this season is bound to be his most exciting yet as Cal Poly is currently ranked #16 in the league Power Rankings under new head coach Chris O’Brien, who is the brother of St. Mary’s Tim O’Brien.

Planning on giving back

It’s unclear where Rivera’s computer engineering career will take him, but at some point in his life he does intend to eventually come back to Guam to stay. Rivera has learned a lot about himself during his rugby journey and how much he loves to teach the game to newer players on the team.

“I’m still learning the game everyday, but I love to talk to those who haven’t even touched a rugby ball yet,” said Rivera.

Rivera would love to introduce rugby to the youth of Guam as many are only introduced if they decided to play flag rugby in middle school. An abundance of rugby players are introduced to the sport in high school.

“If I played at an earlier stage in life, even before middle school, I probably would have developed into a much better player. Most rugby players out here are heading into college with more than six years of experience and I want our future rugby players to have that under their belt as well,” said RIvera.

Rivera was on Guam for the holiday season, but does leave in the first week of January to get back to school and the Club Rugby grind.