Offensive rebounds at the end proves to be the difference 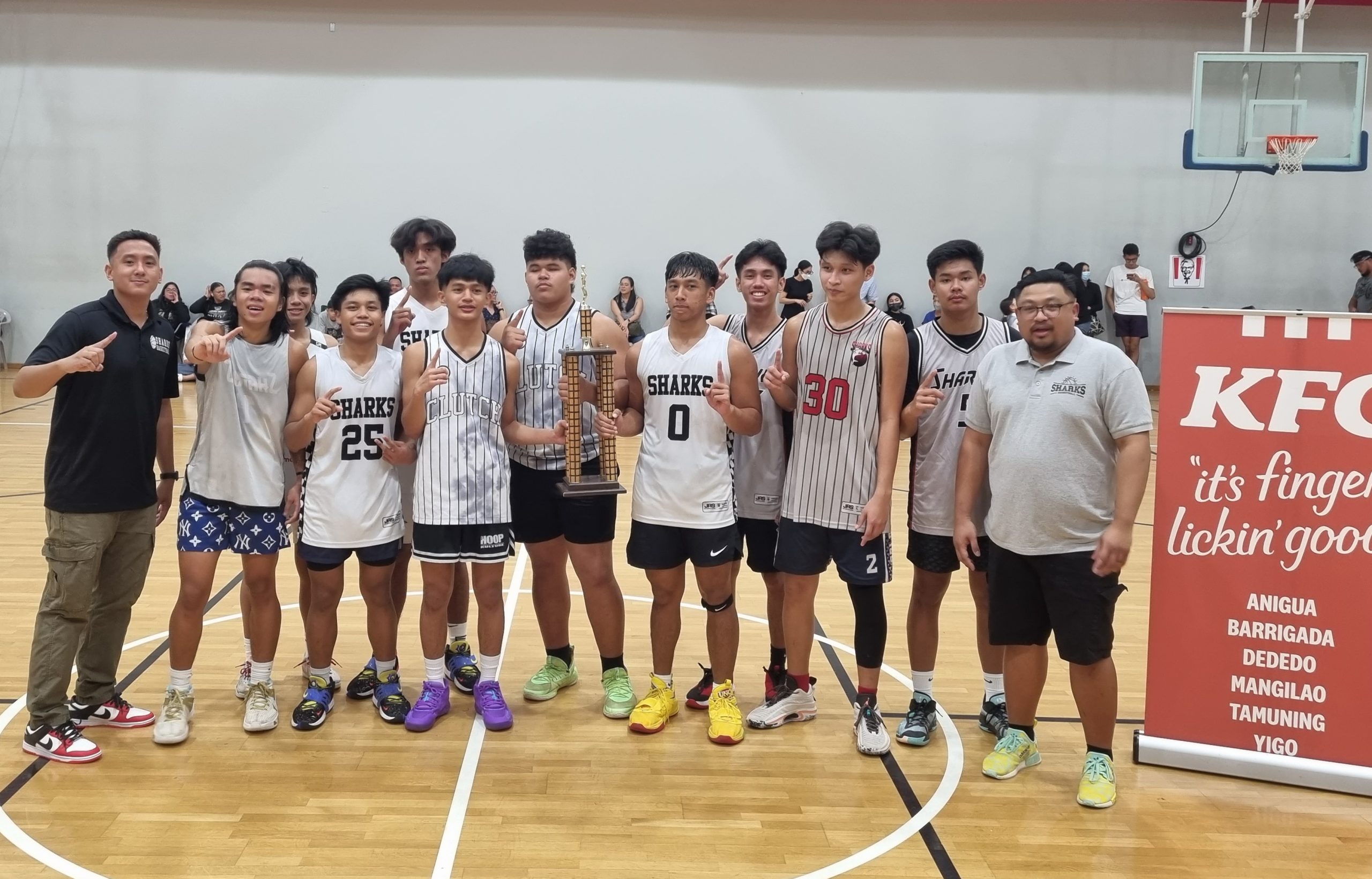 Rebounds matter! The Sharks Club came from behind to defeat Team MVP 49-46 in a thrilling U18 Boys Basketball Summer League championship game held at the Guam National Basketball Training Facility in Tiyan.

The Sharks trailed for 39 minutes and 30 seconds of the title game but never gave up and hustled for every possession to win the championship.

The Sharks extended the game with offensive rebounds off missed free throws to claw their way back into the game to steal the trophy away from Team MVP.

MVP was on a roll early and looked to coast to a victory but were unable to grab key rebounds down the stretch. Down three, the Sharks’ Sthannlie Vitug was at the free throw line and made the first but missed the second to cut the game to 46-45.

Aidan Bonbon from the Sharks grabbed the long rebound miss from Vitug and converted the put back while getting fouled to go up 47-46.

Bonbon went to the foul line and missed but another long rebound went into the hands of Vitug who immediately got fouled. Vitug made both free throws to go up 49-46 with seconds left on the clock.

MVP’s Blaise Ada had a shot to tie the game after Vitug’s made free throws but missed a 30-footer as the Sharks closed the game on a 6-0 run.

“We knew they were a very good team but we wanted to show the league that we wanted it more and it showed because we hustled for those rebounds,” said Sharks center Ralph Macaldo.

Macaldo had a double-double with 18 points and 10 rebounds but it was Vitug’s big 12 points in the fourth quarter that catapulted the Sharks to victory.

“Boxing out at the end was really important,” said Vitug. Vitug, Macaldo and Bonbon had big offensive rebounds in the final minute of regulation to keep the Sharks in the game.

Leading up to the final sequence, it was Vitugs aggressive drives that kept the Sharks within striking distance. “Coach told me to drive or pass to the bigs in the fourth quarter”. Vitug had 12 of the Sharks’ 17 points in the final quarter.

“On defense, we tried to contain Blaise Ada. His perimeter shooting is good and we had to make sure someone was on him at all times,” said Macaldo.

Ada, who is coming back from a knee injury, returned back to form with his savvy moves on offense. Ada had three 3-pointers to open up the contest and MVP established an 18-12 advantage after the first quarter.

The Sharks game plan was simple – feed the big man down low. Shark guards looked for Macaldo who posted up MVP defenders down low to help cut the deficit to 26-22 by halftime.

MVP went ahead by eight points in the fourth quarter after Yoshi Sayama hit a 3-pointer and Phil Guerrero drove in for an and-1 lay-up.

Vitug then took over, driving into MVP defenders that had him visit the charity stripe 10 times in the final period.

The Sharks Club is a team composed of Simon Sanchez High School players. The summer league allows them to keep in shape to start their quest to defend their ISA Basketball League title.

“The ultimate goal is to win back-to-back titles in the ISA League,” said Macaldo. Macaldo said this championship will help their confidence going into the high school season.

Ada had the hot hand for his team, scoring 16 points to lead MVP. Kaine Santos had 10 points, eight rebounds, five assists and two steals for MVP. MVP center Noah Cruz chipped in six points and four rebounds before fouling out.

The KFC Summer League is hosted by the Guam Basketball Federation and all playoff games were played at the GBC National Training Facility in Tiyan.