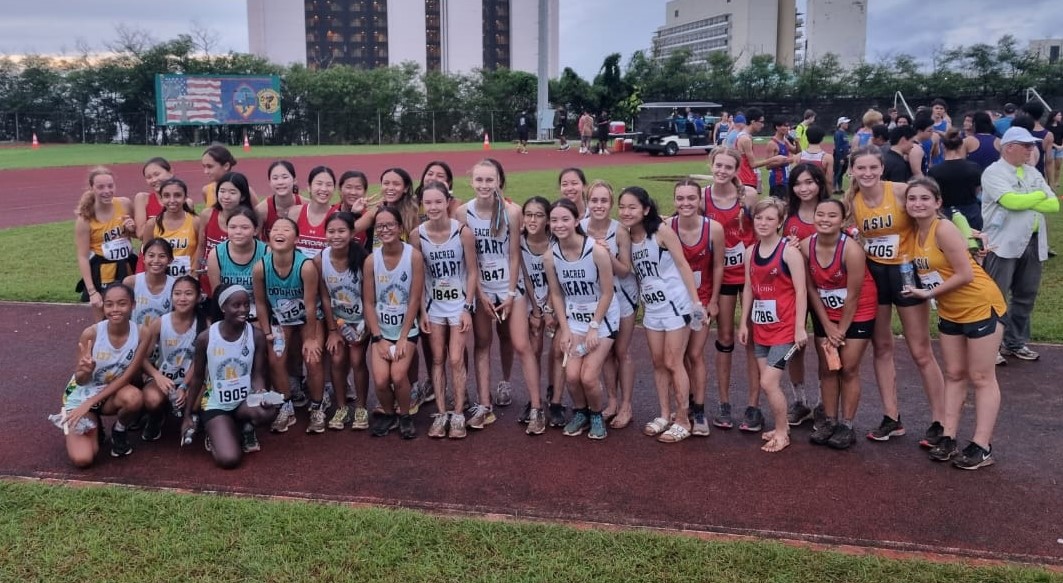 The 17th edition of the API is an invitational 5K race featuring high school runners from the Asia Pacific Region. An additional day is raced with a relay the next morning down the hill in Tumon. Teams from Guam, Japan, Korea and Palau gathered for the event hosted by JFK.

Both local high school league teams had a chance to run alongside international competition. The ISA League just ended their season and the IIAAG got their first action as a pre-season race with their league starting in the second quarter.

Baden wins the API
Baden, a senior from St John’s, said that she was glad the API is back. “I ran the API as a freshman and COVID stole the API from me on my sophomore and junior years so I’m just glad to have the API back again,” said Baden.

Baden said she was unsure how she would be able to perform because the IIAAG season has not started yet. “We’ve only been practicing for two weeks. I actually didn’t know we were going to run this until two weeks ago. I was unsure on how I would do because I haven’t ran a high school race in a year,” said Baden.

“I didn’t know I was first, when they gave me the stick and it showed the number one on it, I was surprised. What kept me going was all of these people out here supporting all of us. I wasn’t just running for St John’s, I was running for Guam and it’s a big honor for me.”

Beardsley, a junior, said he came here to win the event and was glad he was able to succeed despite the wet conditions. “I’m excited to win, the course was more difficult with the mud,” said Beardsley.

A heavy downpour blessed the JFK course prior to the girls race, which was first. Runners had muddy uniforms and shoes as they completed the race which went around the campus and in the jungle trail area.

JFK runner and three-time ISA Cross Country champion Hugh Kent was third for most of the race but was able to pass a runner from the American School in Japan to take second. Kent said earlier in the week that he did not know how good the competition would be. He was just looking to having fun and pushing to finish as fast as possible.

“For the regular (ISA) season races, most of the time I just go out there and run my race. During the API, there were people running with me so I was more focused on running with them and mainly having fun,” said Kent.

Visiting schools from around the region made friends with the local runners and the Guam hospitality spirit was on display from our young athletes and supporters. “This is honestly the most fun I ever had running in a race,” said Claire Lee from the Yongsan International School of Seoul (YISS).

“I was having fun in the first lap but in the second lap I was in pain. But the energy from everyone (cheering) is unmatched here,” said Claire Lee.

Sylvia Lee, also representing YISS, said she is looking forward to the relay on Saturday and relaxing after. “It’s going to fun because we never actually got the chance to do something like that before,” said Sylvia Lee. “Afterwards, I’m really looking forward to a nice walk on the beach”.

Day 2 of the API is Saturday at 6 am with a relay race. The race will be at Ypao Beach Park in Tumon. “I’m looking forward to the relay tomorrow. It’s something we haven’t really looked into yet, but after this we are going to study it,” said Beardsley.