Walk-off hit by Yobech in the bottom of the 9th 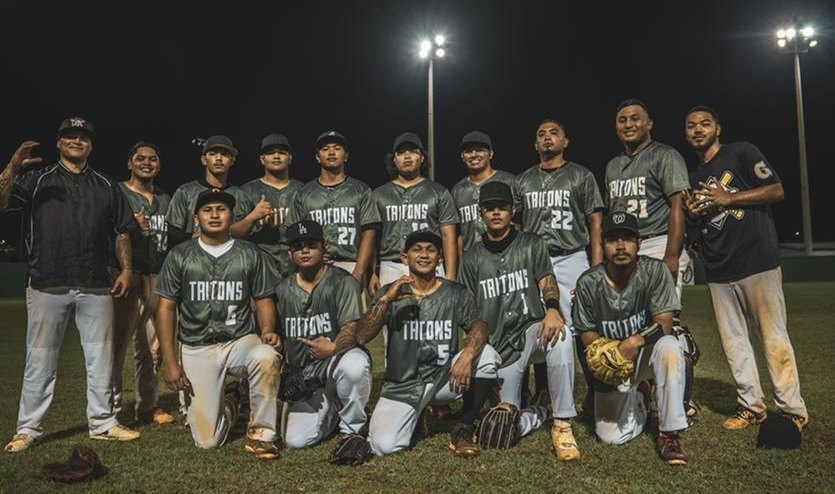 PRESS RELEASE – The University of Guam Tritons ran their baseball record to 4-0 on the season as the Tritons rallied for 3 runs in the bottom of the 9th inning to defeat the Yigo Typhoons 7-6 in the Guam Major League game at Paseo Stadium on Tuesday night.

The Tritons rallied from being down 6-0 after the first three Typhoon at bats as the Yigo team scored 1 run in the first inning, 3 runs in the 2nd and 2 runs in the top of the third.

UOG scored 2 runs in the third and 2 runs in the 5th to make the score Yigo 6, Tritons 4 going into the 6th inning, but neither team could score again until the UOG rally in the bottom of the 9th.

In the bottom of the 9th inning, Kyle Martinez opened the final at bat for UOG with a single and Arren Yatar then doubled to put runners on 2nd and 3rd. After the first out was recorded on an infield popup, the Tritons scored one run on a wild pitch to make 6-5, but the Typhoons got a strikeout for the 2nd out and UOG’s Jathan Muna-Barnes was intentionally walked to load the bases, O’Neil Yobech delivered a two out, two run single to right field as the Tritons had a walk-off victory in the game.

O’Neil Yobech led the Tritons at the plate with a 2-4 night and 3 RBIs while Arren Yatar added a double for UOG and Kobe Martinez hit a triple.

The Tritons move to 4-0 on the season while the Typhoons dropped to 2-2. UOG next plays Paradise Dodgers on May 22 at 7 pm at Paseo Stadium.