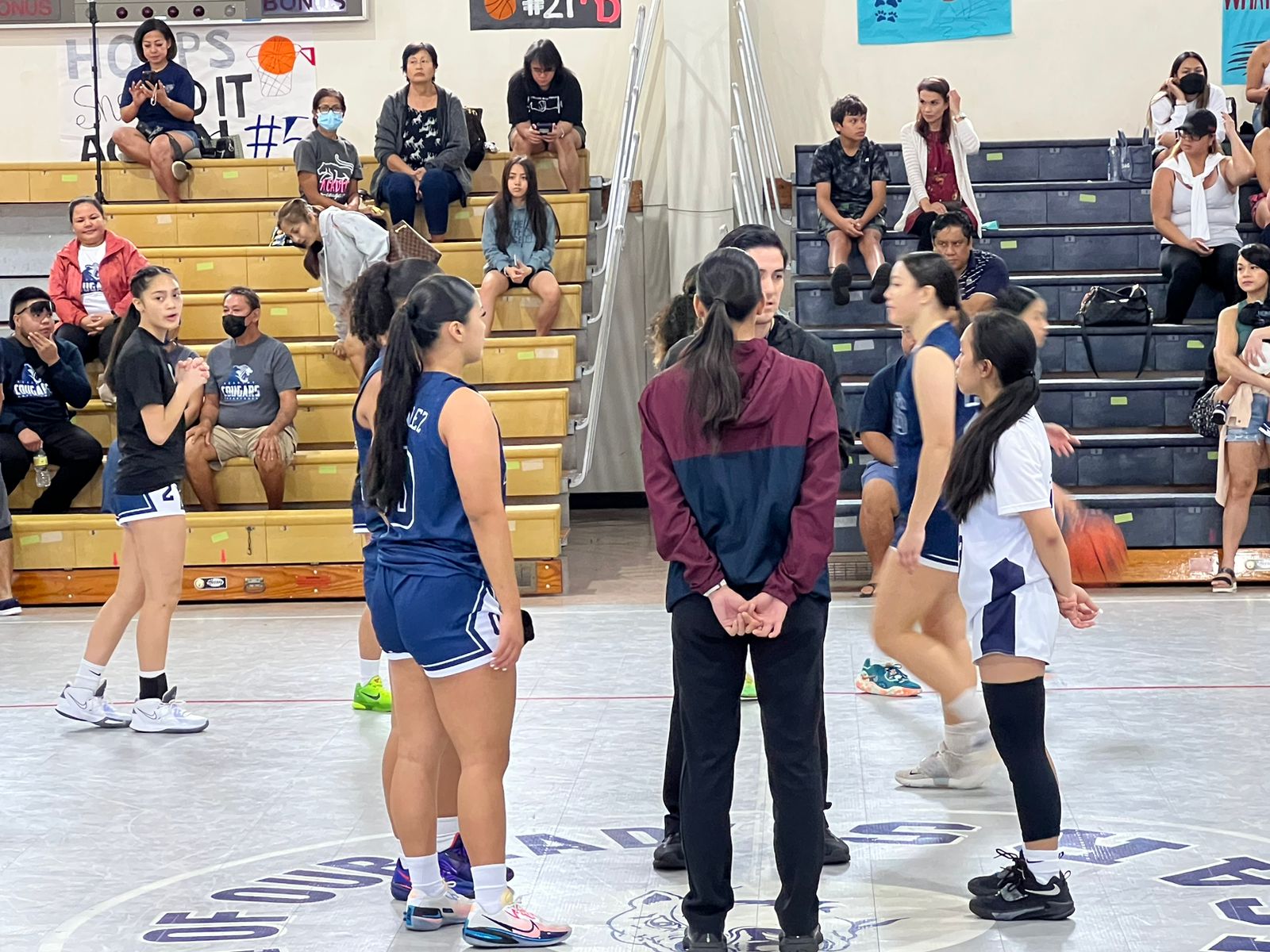 In the highly anticipated rematch of the IIAAG Girls Basketball Championship game held earlier this year, the undefeated Saint Paul Warriors defeated the defending champions Academy of Our Lady of Guam Cougars 61-30 Saturday morning at the Academy gym.

Seniors Kailie Celo and Kaylie Pinaula combined for 22 points to lead the way for the Warriors who remain unbeaten at 6-0 while the Cougars fall to 4-2. Teammate Ryanna Ngrichomlei led all scorers with 15 points, scoring 10 in the 4th quarter alone.

“We just came into the game with a mentality of playing strong defense,” added Pinaula. “We never underestimate anyone. We just go out and play to our best potential.”

The Warriors went to work early on both offense and defense using their full court press to force the Cougars into committing multiple errors and converting those errors into points.

With the score tied 4-4 and a little over six minutes remaining in the first quarter, the Warriors blew the game open going on a 19-0 run and holding the Cougars to only four points to lead 23-4 after one quarter of play.

Aside from getting her revenge for the loss to the Cougars earlier this year, Celo stated that what drives her to take an aggressive approach to the rivalry with Academy is, “being a former Cougar that’s like my top motivation.”

The Warriors continued to play lock down basketball to begin the second quarter scoring the first six points and extending their run to 25-0 increasing their lead to 29-4.

The Cougars would finally put an end to their scoring drought after Victoria Rapadas was fouled on a layup attempt sending her to the free throw line. Rapadas would hit both her free throws with 4:43 remaining in the first half with the score 29-6.

Both teams would trade baskets for the remainder of the half with the Cougars outscoring the Warriors 8-7, but the Warriors would take a 36-14 lead into the half.

Coming out of halftime, both teams struggled to find the basket as both teams combined for only 13 points in third quarter which was riddled with turnovers and fouls.

The Warriors would outscore the Cougars 7-6 in the quarter taking a 43-20 lead into the final period of the game.

The final quarter started off good for the Cougars scoring the first two baskets off the Warriors turnovers. But the Cougars shooting woes would continue as the offense struggled to score on wide open shot attempts.

The Warriors Ngrichomlei, coming off the bench, added insult to injury as managed to score 10 points in the fourth quarter alone matching the Cougars team total for the period.

Though the Warriors continue to rack up points every game, both Celo and Pinaula agreed that there’s still much work left to do to prepare them for the playoffs.

“There’s definitely still room for us to get better,” said Pinaula. “We just have to keep working hard in practice and hopefully come out with a championship.”

“There still things we can work on,” added Celo. “I think we’re in a good place where we are right now, but we can definitely get better.”

The Warriors got significant help from their bench as their on-starters combined for 24 points for the game. Celo and Pinaula both agreed that the depth of their bench provides confidence that the energy level would be maintained when the starters are subbed out.

“I think we really have a strong bench,” said Pinaula. “Our fab freshmen are really good. They always keep the energy up and we just mix together really well.”

“They’ll definitely keep getting better,” added Celo. “I have a lot of faith in them.”