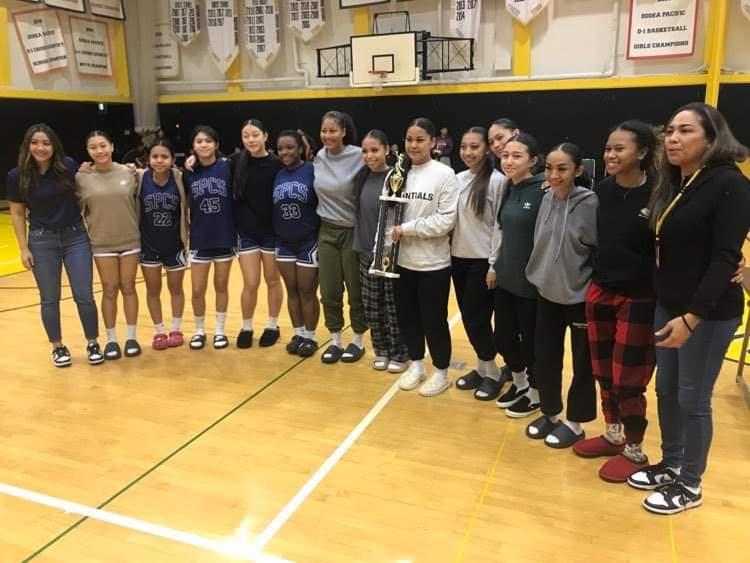 TOKYO, Japan – The St. Paul Warriors girls basketball team are the champions of the 2023 Kanto Classic Basketball Invitational in Tokyo, Japan. After winning the IIAAG championship and the All-island championship, the Kanto Classic victory was the cherry on top for a memorable season.

The Warriors got the 38-33 victory over the Kadena Panthers in the final held at the American School in Japan (ASIJ) Saturday night. The win was revenge over a regular pool play loss, their only loss of their 2022-2023 campaign.

The Warriors made necessary adjustments from that 38-25 loss to Kadena in pool play to win the triple crown.

Anaya Mudzimarena was named the tournament MVP. Mudzimarena and A’lura Hernandez played exceptionally well for the entire tournament, the front court duo anchored Warriors on both offense and defense.

The Warriors were a complete team from top to bottom with guards Kaylie Pinaula, Kimora Charfauros, Kailie Celo, Ryanna Ngirchomlei and Sazzanei Quintanilla complimenting the their bigs.

“Having good leadership from our coaches was very impactful for us,” said Mudzimarena. “Women coaches are starting to come up and they encouraged us when we had our off days and they were always there for us for everything,” said Mudzimarena after winning the IIAAG title back in December.

The FD Friars advanced to the championship game but fell to powerhouse St. Mary’s 59-51.

After eliminating Yokoto 75-62, the Friars played their third game of the day in the finale. St. Mary’s established an early lead and never looked back. The Friar bench did a superb job in the fourth quarter and cut the lead to six points, but St. Mary’s iced the game at the line to hold on.

The second unit had a good showing in the championship game to keep the Friars in the contest. Kiyoshi Sayama was on fire from beyond the arc, sinking four three-pointers in the first half against St. Mary’s.  Also having a good tournament were starters Blaise Ada, Noah Tenorio and Jaden Santos.

“With our (IIAAG) regular season coming up soon, the experince and reps we’ve been getting here against big competition will only help us get better,” said Santos.

The Friars come back to Guam this week and will head straight into the season. “I feel this trip really solidified our bond as a team,” added Santos.

The Okkodo Bulldogs ended the tournament in a high note, defeating Yokota to finish third. After winning a thrilling 65-61 overtime quarterfinal win against Yokohama, the Bulldogs suffered a loss against St. Mary’s in the semifinals.

The Bulldogs made the most of their trip and defeated Yokota in the third place consolation game to leave Japan with some important experience heading into their ISA season.

The Bulldogs entered the first day of the tournament coming straight from the airport to playing their games. The Bulldogs walked on the ASIJ campus with their bags as the CAJ team was warming up for their game.

The Bulldogs were tested and passed their test to bring some confidence and momentum with them heading into their GDOE ISA season. They had comeback wins, an overtime win and learned how to acclimate to different styles of play at the Kanto Classic. KayJay Martin had a breakout tournament, leading the Bulldogs offensively and defensively. Martin consistently scored in double digits and hit crucial three-pointers for Okkodo.

It was unfortunate for the Cougars to meet a familiar foe in the quarterfinals. After losing to the Warriors, the Cougars were pushed down to the consolation bracket.

Despite being ousted by a Guam team, head coach Jimmy Yi will have a young squad return next season with experience. Maria-Jean Paulino, Mylie Butters and  Madeline Ada all had experience in Japan as well as the U15 National Team to take with them.