The Academy Cougars appeared to have an answer to everything the ND Royals were throwing them Wednesday evening as the upstart Cougars managed to go blow-for-blow in a 3-3 tie with the leagues top team at the GFA Training Facility. 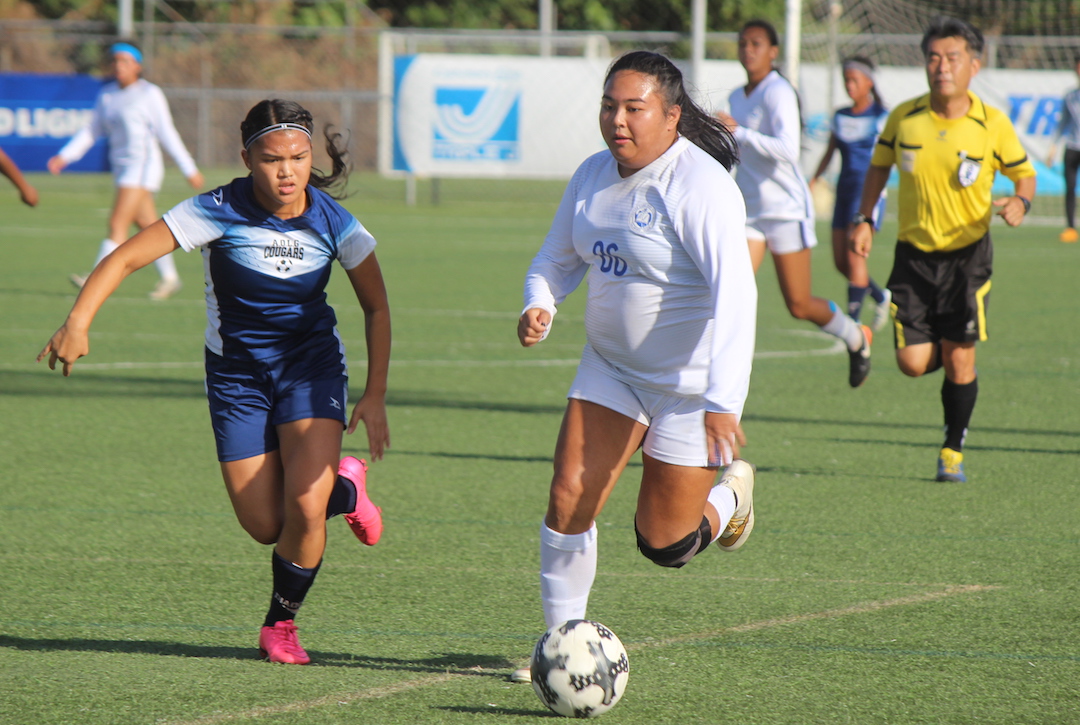 The Academy Cougars appeared to have an answer for everything the ND Royals were throwing them Wednesday evening as the upstart Cougars managed to go blow-for-blow in a 3-3 tie with the leagues top team at the GFA Training Facility.

ND is the only team in the league without a loss, but their tie with the Cougars is their second of the season, ending their regular season at (9-0-2) .

The Royals broke a scoreless game in the 33rd minute of the first half off a boot from Randi-Jo Paulino, assist Brianne Leon Guerrero, which translated to a 1-0 halftime lead. ND took their foot off the gas pedal which allowed the Cougars to take quick command of the game.

“We had to play hard for the whole game and not just towards the end,” said Paulino about what coach Wilter’s message to the team after the tie.

The Royals fans celebrate as Randi-Jo Paulino nets the first goal of the game. (photo by Robert Balajadia)

Academy wasted no time getting back into the contest with a score from the right wing in the 43rd minute as Thea Baker got her shot to bounce off the keepers mitts to tie the contest at a goal each.

Then, Cougar cousins Aubi and Rhia Pangindian weaved through the Royal defense before Rhia used a right foot from the middle of the box to give Academy a 2-1 lead, sending the Cougar crowd into a frenzy. Rhia is usually anchoring the Cougar defense, but she showed her strong offensive capability in the second half off the lead-changing score.

“We work so well together,” said Rhia on playing with Aubi. “She knew where I was going to run so she gave me a good pass for the score. We trust each other to make plays and we both know what we’re capable of, which just helps us play better.”

Pangindian’s score woke up the dormant ND offense as striker Celine Doranila got an open look from the right wing to once again tie the game at two goals each. Ball possession swayed ND’s way in the first half, but the Cougar front responded well by matching ND’s shots at goal at 13 each in the second half.

With her hair all in her face, Cougar Rhia Pangindian slices the defense to give Academy a 2-1 lead in the second half. (photo by Robert Balajadia)

Paulino then scored from the left wing in the 67th minute on another big boot to give ND a 3-2 lead which seemed to be the dagger. Academy stayed resilient with their attack as Aubi danced around a few defenders that set up the equalizer.

The constant pressure from Aubi allowed Cougar Chloe Salas to swoop in for two chances at a goal. Salas’ first shot was blocked by a Royal defender, but she managed to control the rebound and used her left foot inside the box to sneak in the game-tying goal.

“We felt we were holding them down better than we thought we would in the first half and we felt that if we continued to play that way then we would be able to push through,” said Rhia.

“They didn’t do much differently, but they kept putting pressure on us trying to score,” said Paulino on what the Cougars did in the second half.

The ND Royals wrapped up their season while the Cougars will face Guam High and St. John’s as the playoffs are set to being on Saturday, May 6th.

“We knew this was going to be a big game for us after GW came in and slammed us earlier this season. We saw how they played GW and we know ND is a strong team so we played our hardest out there,” said Rhia.

Cousins Aubi and Rhia Pangindian celebrate a second half goal that gave Academy a 2-1 lead. (photo by Robert Balajadia)

Cougar Chloe Salas sneaks in the final goal of the game with a perfectly timed left foot. (photo by Robert Balajadia)