The goal for Friday evenings third place game and 2017 Championship Game Friendly was to stretch out as much volleyball as you can before summer officially wraps up at the Tiyan High gym. 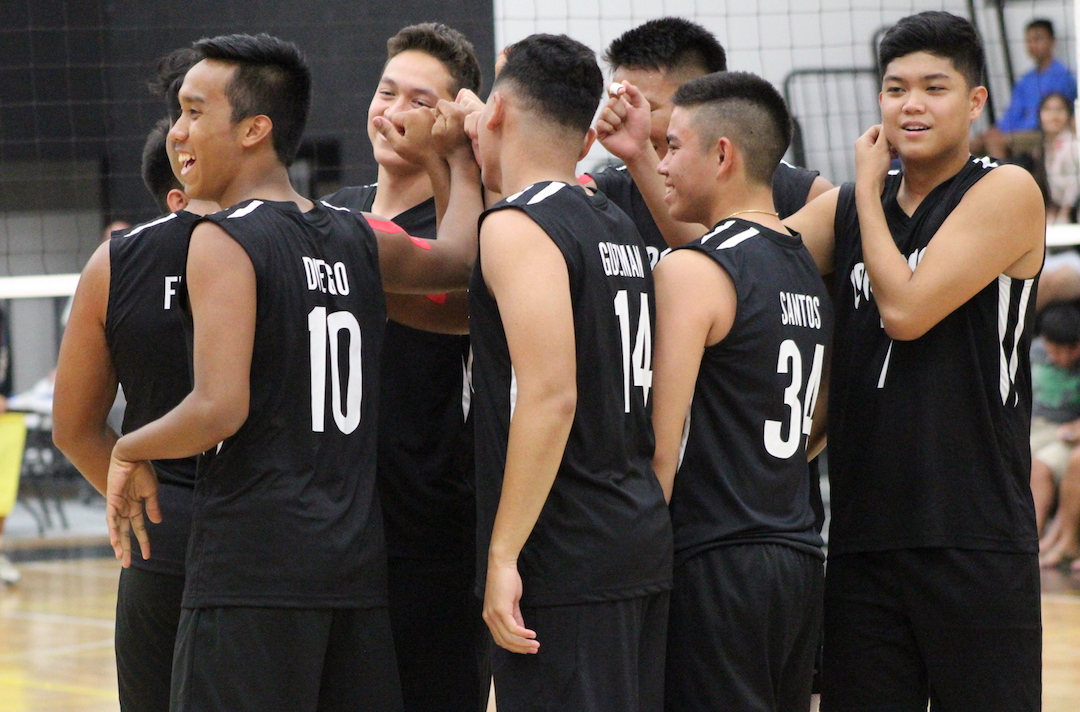 The goal for Friday evenings third place game and 2017 Championship Game Friendly was to stretch out as much volleyball as you can before summer officially wraps up at the Tiyan High gym. The Guam U19 boys put on an electrifying five-set title game while the Palau had to hold off the scrappy U16 bunch through five sets for the 3rd place finish.

Former Friars Eric Ada and Vince Leon Guerrero anchored the offense in crunch time with the older guys commending the efforts from their younger counterparts.

“The younger guys came out with more energy then we had. They seemed like they wanted more than us and their communication was on point,” said Red’s Leon Guerrero.

The Red team was without the lethal Aiden ‘Air Force’ Ferrara due to injury and the White squad was missing middle Giovanni Manglona.

After showing out in the opening set behind Ada’s consistent jump serving, the White squad would power their own runs. Aiden McDonald, who has been a force all tourney, proved difficult to stop along with strong net play from blocker Brandon Mendiola.

McDonald and fellow hitter Noah Diaz kept the U19 frontline of Devin San Agustin and Ada busy, with errors plaguing the Red team for two straight sets. The offense ran heavy through Leon Guerrero in the 4th set where he gave the Red’s their most dominant win, knowing well ahead of the game that his team would need him to play strong.

“I felt like today was going to be a good game for me when coach rich and Aiden Ferrara told me play my game. So I came onto the court to knowing I had a job to do,” said Leon Guerrero.

Fans filled the Tiyan gym to spectate court volleyball in the summertime, which is most unusual for the younger boys teams. To the boys on the court, it meant a lot knowing they have continued support.

“It was an honor to play in front of a big crowd again. It feels the same as playing in highschool but this is for the island. I also miss the night lights when we play [volleyball],” added Vince.

And for the volleyball enthusiast like Vince, hitting above the nets over summer was a welcome change of pace.

“I’ve been working on my game this whole summer and I feel like my game has also improved dramatically.”

A near three-set sweep was in the midst for Team Palau as they had Guam on the brink of defeat late in the third set. The U16 team went from “happy to be here” to “let’s win this game”, escaping the third with a wild 33-31 set win.

Guam would steal another set to force the fifth and final where an overshot on a kill would give the visiting team a 16-14 set win, grabbing 3rd place for the tournament.

Libero Fujin Shimoda dives for a save. (photo by Robert Balajadia)

Eric Ada attempts a hit from the outside. (photo by Robert Balajadia)

Brandon Mendiola gets a tap over the wall. (photo by Robert Balajadia)

Aiden McDonald gets the first kill attempt of the game. (photo by Robert Balajadia)