The four-day friendly volleyball tournament will wrap up Friday evening with both the Guam U19 teams competing for the title after both the red and white squads earned semifinals victories Thursday evening at the Tiyan High gym. 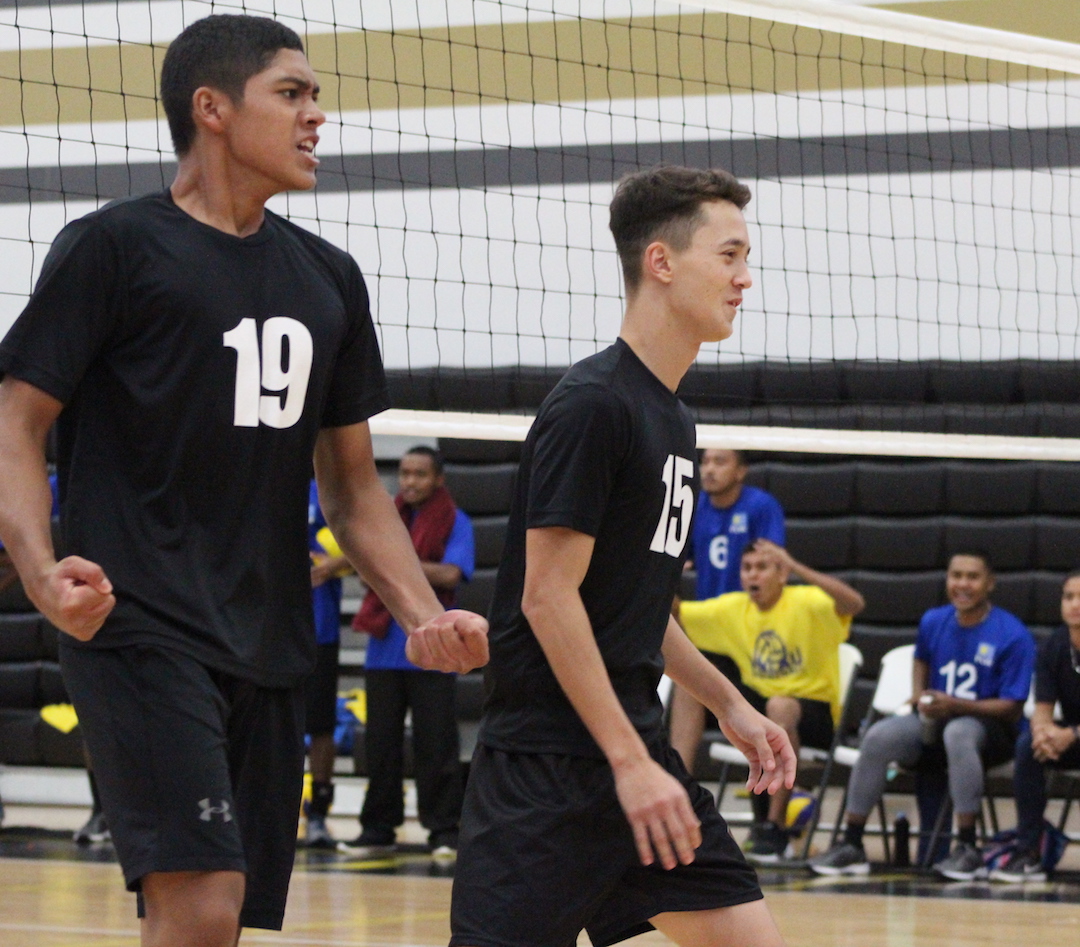 The four-day friendly volleyball tournament will wrap up Friday evening with both the Guam U19 teams competing for the title after both the red and white squads earned semifinals victories Thursday evening at the Tiyan High gym.

U19 White rallies to beat Palau

The U19 White Team battled the only visiting team in the tournament Palau to a five-set thriller after dropping the first two sets. Aiden McDonald proved clutch for Team Guam, notching the final two kills in their 21-25, 22-25, 25-17, 25-19, 16-14 come from behind victory.

Palau stunned the home team in the opening set, leading wire-to-wire with hitter Iverson August registering three kills in the set. Palau rode momentum right into the second set with Peace Sumor carrying the bulk of the offense with four kills to put Guam in a quick 0-2 hole.

“They did a good job at capitalizing when we were out of rhythm,” said Aiden McDonald.

The U19 White squad was in danger of getting swept until taking a late lead in the third set 14-13 after trailing all set. Guam would end the set on an 11-5 run to keep hope alive.

Late in the 4th set, Palau met the host team at 17 points all after a pair of Guam errors, but Palau quickly gave those points back with Guam catching momentum up 20-17, leading to the late 25-17 surge.

The 5th set featured a quick 5-0 lead for Palau before an 8-5 lead garnered a court swap. With a spot in the championship game close at hand, the Palau fans and bench pumped energy into the gym with the visiting team up 11-7. A serve ace put Palau up 12-7 before a timeout by Guam coach Steve Pangelinan settled the team in.

A combination of strong passing and Palau errors brought Guam back from the dead trailing 13-12. A kill from Palau’s Hayashi Hesus put Guam on the brink trailing 14-12, but errors would cost Palau their comfort.

McDonald then took over after clean sets from Seiji Endo allowed the dangerous hitter to target the backside of the Palau defense. One kill for a 15-14 lead and another shot in the exact same spot, the left corner of the court, for the win.

“The outside blocker was shorter and I knew he couldn’t get over the net so I just made the hit over the block to the spot where the defense wasn’t covering,” added Aiden.

The U19 White team poses for a team photo after a thrilling win over Palau.

U19 team too much for youthful U16 squad

Aside from holding an 11-5 lead in the first set, the U16 squad seemed content with every point they scored against the older and more experienced U19 Red team. The lead didn’t last long as U19’s Eric Ada displayed an unstoppable jump serve and hitter Vince Leon Guerrero unloaded danger with every spike. A quick 13-4 run put the U19 team in control, taking the first set 25-21.

More dominance was displayed in the 2nd set by the U19 team when Gary Aromin added a thunderous kill for a final point 25-13, taking a two-set lead.

The U16 squad went on a late 5-0 run to get within 23-19 in the final set, but a momentum killing blow from Leon Guerrero was all she wrote.

Both U19 teams will play in title game at 6 pm.

Guam’s Aiden McDonald gets a kill off the block in the second set. (photo by Robert Balajadia)

Guam’s Giovanni Manglona is first to the ball in the opening set. (photo by Robert Balajadia)

U19’s Gary Aromin secures a point for Guam’s U19 team against the U16 team. (photo by Robert Balajadia)

Vince Leon Guerrero shows power in his swing with a kill in the second set. (photo by Robert Balajadia)