The Geckos beat the Sanchez Sharks 15-12 at the Okkodo field on Saturday morning. This match was a makeup game from a game that got cancelled due to bad weather conditions. 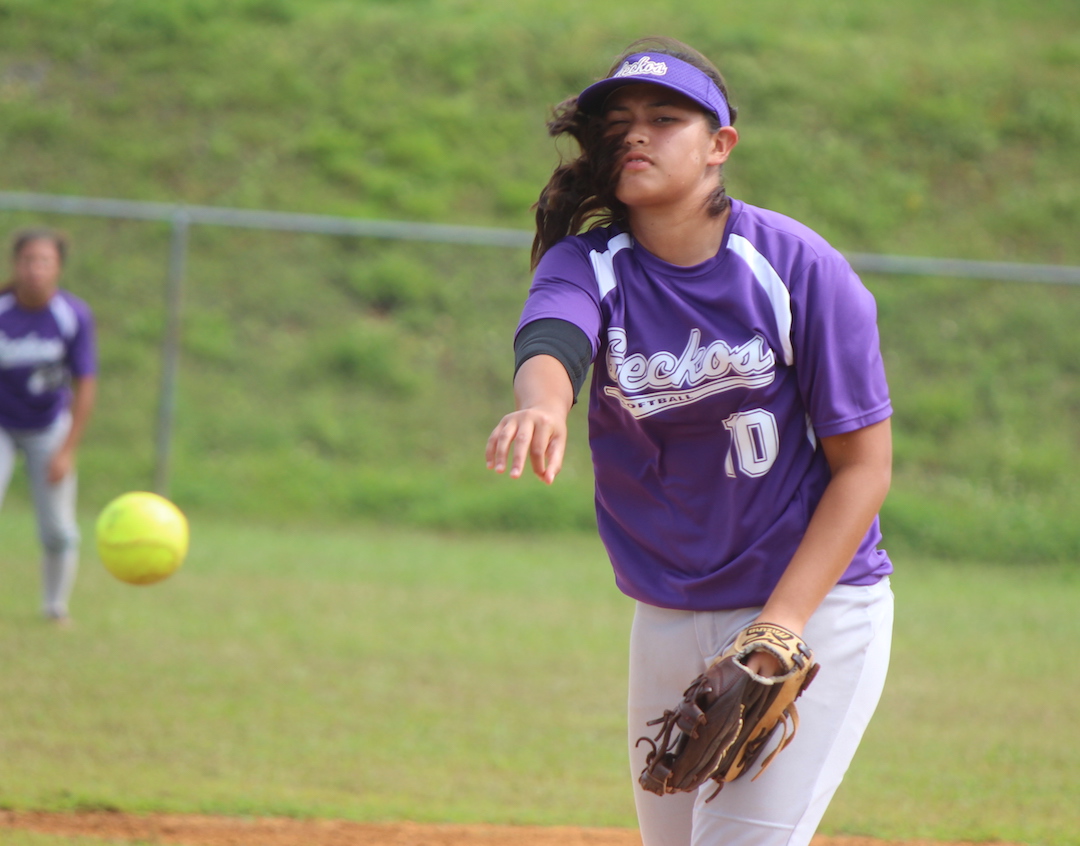 The Geckos beat the Sanchez Sharks 15-12 at the Okkodo field on Saturday morning. This match was a makeup game from a game that got cancelled due to bad weather conditions.

The GW Geckos were up to bat first, being the away team. Three runs were scored in this half of the first inning, which came from an RBI double from Janelle Lujan, and a sacrifice fly from Gecko pitcher Sam Quinata. These slugging efforts gave the Geckos a comfortable 3-0 lead at the end of the top of the first half.

The Sharks only got one run on the board in the first half. This run came from Paige Aguon when she stole home after being hit by a pitch and stealing her way to home. Two more batters were walked in this inning and no hits were allowed by the Gecko defense.The score at the end of the inning was 3-1, Geckos still with a two point advantage.

The GW offense slowed down in the second inning, only getting one run. This run was contributed by the second baseman Jojo Cruz, who hit a sacrifice fly ball, allowing Quinata to take the run. This made the score 4-1, a three point lead for the Geckos.

The Sharks made a rally in the bottom of the second inning. They scored a game tying three runs in the inning. The first two Shark runs came from an RBI triple hit by slugger Theya Santos, making Dearah Torre and Jasilyn Charfarous to make their runs. The third run was from a sacrifice fly ball hit by Paige Aguon, allowing Tehya Santos to take home. The score at the end of the second inning was 4-4.

Two Gecko runs were scored in the third inning. One of these runs was an RBI hit by catcher Toves. The other run also came from Toves, after she stole home plate. The score after the offensive effort was 6-4, Geckos back with the lead.

The Sharks had absolutely no offensive action in the third inning, after being stunned by the Gecko defense once again.

The Geckos scored an impressive four more runs in the fourth inning, two of these runs came from stolen homes and the other two runs came from an RBI double. The score after this was 10-4.

The Sharks were unable to produce offensive action in the fourth inning.

GW got three more runs in the fifth inning inning, All of them came from RBIs, an RBI double, and an RBI single from Janelle Lujan. The score after this was 13-4, Geckos with a dominant lead.

Sanchez scored a very impressive five runs in the fifth inning. All of these runs came from go ahead runs as the result of back to back walks. This went on until there were three outs, making the score 13-9, the Sharks drawing closer.

GW got no runs in the top of the sixth inning, being shutout by the Sanchez defense.

The Sharks earned two more runs in the sixth inning, they were both off of RBIs, one was an RBI single, the other was an RBI double. The score was 13-12, a very close game.

The Final two runs of the game belonged to the Geckos, off of an RBI hit by Alex Alexander, the leftfielder.

“The wind really had an impact on how our big hitters performed, but we were still able to keep our heads up and execute,” said the GW head coach.