GSPN and Guam Elite Basketball Academy have teamed up to bring the 2017 Boys Basketball Seasonal Awards! 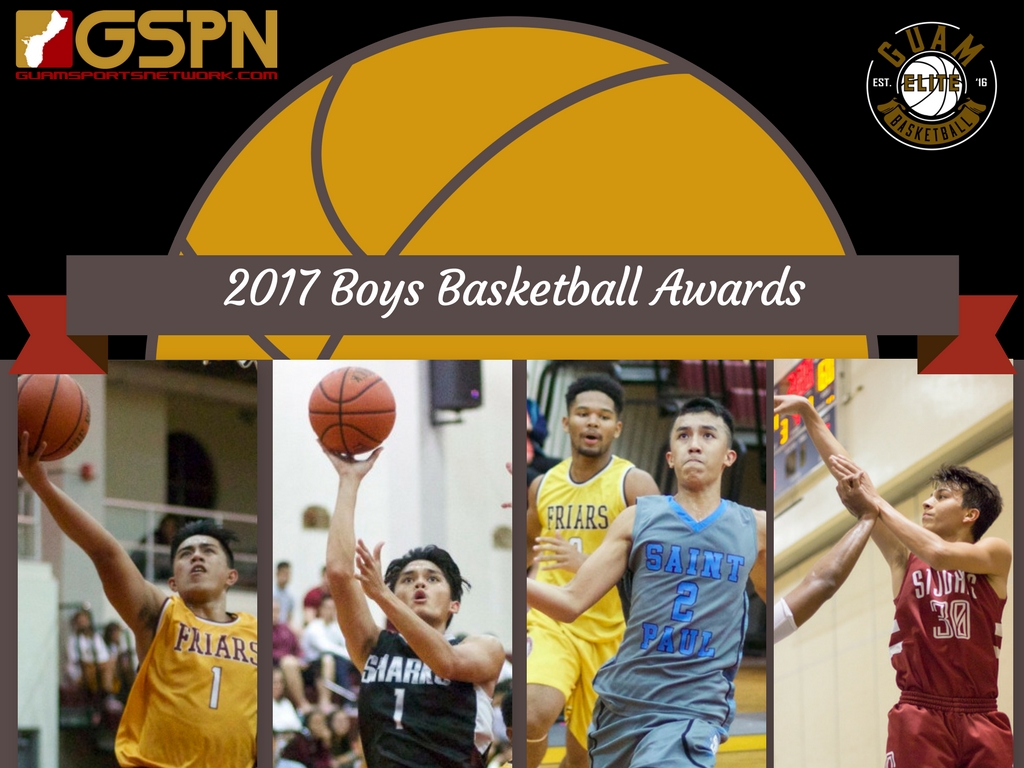 GSPN and Guam Elite Basketball Academy have teamed up to bring the 2017 Boys Basketball Seasonal Awards!

The 2017 season has been nothing short of a fun and competitive journey and it’s time to reward the hard working athletes who made the league as fun as it was to watch. With the playoffs set to kick off next week, the true nature of competitive basketball will be on full display as all 12 teams will be fighting to earn the 2017 title!

Anthony Castro: Typically, the “Most Valuable Player” is the best player on the best team in league. But by definition, a true MVP is the most valuable player to his team. With former Sanchez Shark star John Buan gone due to graduation, many counted the Sanchez Sharks out of contention this year. However, the Sharks are tied with the third best record in the league thanks to the huge play of Castro. His all-around consistency helped his team receive a bye round in the first round and the Sharks have a shot at finding their way to the championship game if Castro continues to play well. His leadership is also a major characteristic to the Sharks’ success.

Runners up – Juan King, Guam High (12): King has had a stellar year in basketball with the Panthers finishing as one of the top four teams in the league. King has been able to take a good Panthers team and transform them into serious contenders. The leagues most streaky scorer, King is almost impossible to stop when he gets rolling. A stickler on defense combined with strong physical play fit well with Kings ability to put the ball in the basket. King also scored the highest point total of the season by netting 46 points in a win over GW midseason.


Juan King Jr.: has the ability to go off at any point in the game. King helped the Panthers earn a first round bye with huge games including a league high 46 points scored against GW on January 31st. He can shoot the long ball and penetrate at will for easy baskets.

Kobe Sotelo: Will finish the season as the scoring champion for the 2017 season. Sotelo, a senior, averaged 21 points per game for the Eagles who finished 4-7 for the season. Despite having only seven players on their roster, the Eagles remained competitive. Sotelo is the leader on the court for head coach Stephen Yates.

Anthony Castro: Big time buckets seem to be Castro’s exclusive way to score. When the Sharks need a bucket most, Castro is the guy with the ball in his hands. He helped lead a comeback against the Guam High Panthers where he nailed basket after basket, which would play a big part in the teams 3rd place finish.

Kyle Gaitan: Gaitan helped the Friars earn a playoff bye round and the second best record in the league. He is the best defender on the FD squad and he has natural ability to rebound. He had a near triple double on Valentine’s Day against the Sharks with 17 points, 10 rebounds and nine steals. The Friars are heavy weight contenders this season thanks to the all-around play of Gaitan.

Jason Diaz: The Warriors have proven to be the best team in the league and Diaz’s play has been a strong part of it. Able to finish at the rim with a quick first step makes him difficult to guard. His most underrated stat is his ability to rebound the ball on the offensive end giving the Warriors insurance on both ends of the floor. Diaz has also proven that he doesn’t need the ball to be effective.

Michael Min: Michael Min from the St John’s Knights is second in the league in scorer in league averaging 19.45 points per game. Min poses havoc for opposing coaches because he is hard to defend. He can finish at the basket and has a much improved jump shot to add to his repertoire. The Knights have lost a few tough games this season, but they become hard to stop when Min finds his rhythm.

Jahmar White: The sensational sophomore from St. Paul has shown no signs of inexperience this season. White plays at a comfortable pace and is terrific at finish around the rim. He’s gaining more confidence in his shooting ability each game. St. Paul is still sporting an unbeaten record and White’s smooth play has been a big bonus.

Takumi Simon: The leagues most lethal shooter can’t be given even a little breathing room from the three-point line. Simon has developed into much more than a three-pointe shooter and he proves his wealth every game by also getting better on the defensive end. Free throws are almost a sure bet and his running background makes him dangerous on the feast breaks. Simon has also added a nifty floater to his offensive game only further replicating Stephen Curry.

Shannon Enriquez: It’s no secret Enriquez has got basketball skills, but his efforts this season are shadowed by the Okkodo Bulldogs horrific start going 0-6. They’ve since turned it around and are riding a small winning streak due in large part to Enriquez’s elevated play. Shannon is currently third in scoring at 17.8 points per game.

De’Aundre Cruz: A dominant low post threat as well as a physical freak on defense. If Cruz’s stature isn’t already a standout feature, his play on the court makes you wonder how the star football running back also has a knack for basketball. Cruz has become the Friars main target in crunch time where defenders are forced to foul him in order to try and stop him on his way to rim. Cruz struggles at the free throw line, but makes up for it on the defensive end of the court.

Michael Min: Having a reliable ball handler never goes overlooked and Min has become one the most established ball handlers in the league. Min has the ability to light up the score board, but he’s also at the controls for the Knights and runs everything for coach Fred Peters. Min often makes the right decisions with the ball and knows where his teammates can be most effective with the ball.

Jason Diaz: Has been a do-it-all man since he entered the league two seasons ago. He scores, rebounds, blocks shots and dishes out assists for the Warriors. He can play point and shoot well from beyond the arc as well. Against FD on January 20th, Diaz had 20 points, seven rebounds, four assist and a pair of blocked shots as the Warriors blew out the Friars on their home court.

Takumi Simon: This award comes as no surprise for sharp shooter Takumi Simon. The opposition knows not to leave Simon alone behind the arc because he will make them pay. Simon has learned to move away from the ball to get open looks. The junior from St John’s will need to keep up the sharp shooting to help the Knights claim the IIAAG championship. He also provided fans a treat during the pre-season championship game by knocking down 11 three pointers in an amazing shooting display.

De’Aundre Cruz: The IIAAG offensive football MVP is showing he has game on the court as well. De’Aundre Cruz is the strongest player down low in the league and powers his way for points. He rises above defenders with his freakish athleticism and dunking ability. FD has out rebounded every opponent this season and Cruz is a big reason for the dominance down low.

Ruedel Galang: led the Islanders’ JV team last season and is providing valuable minutes for head coach Rey Serafico. Galang is dangerous in the open court and had an awesome rookie varsity season for the defending champions. The JFK dynasty and future lies in the hands of Galang as it appears he’s ready to handle a much bigger responsibility in the future given his current comfortableness in being a main offensive threat for the current Islanders.

Jericho Perez deserves the sixth man of the year award. The St Paul Warriors are the best team in the league because of their depth. Perez relieves the starters and plays well on both sides of the court. In a close game against the St John’s Knights on February 3rd, Perez was huge with 12 points and seven rebounds off the bench. Perez also had a steal with two seconds remaining in regulation to give the Warriors the victory against the visiting Knights.