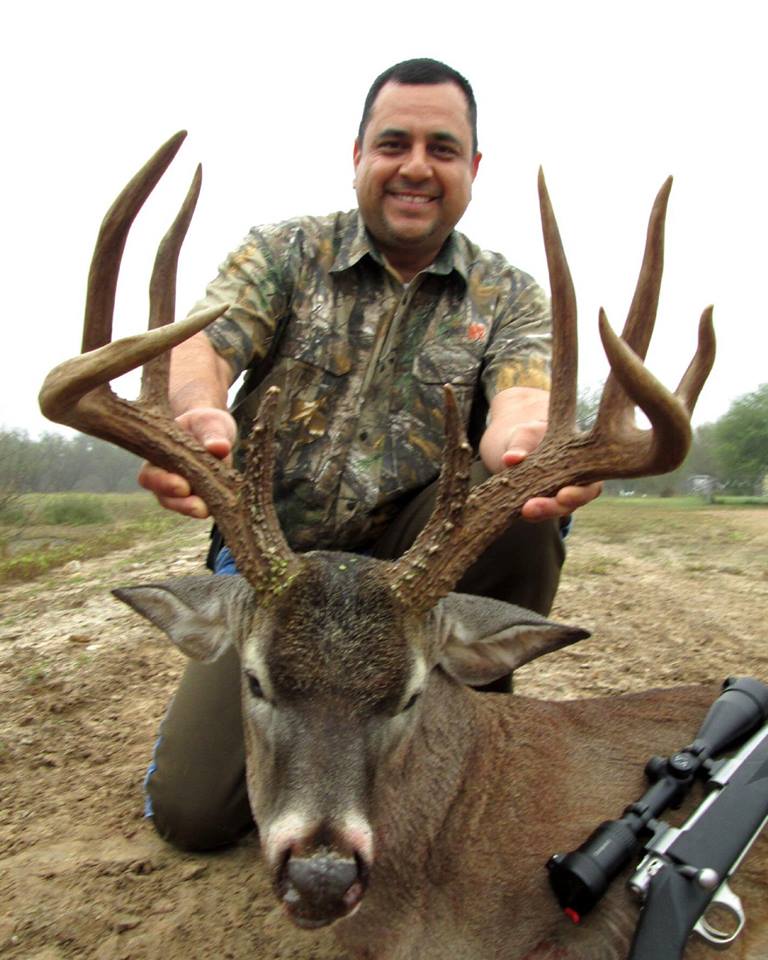 Al Moreno is a 1991 graduate of Father Duenas and is married to Monette McDonald Moreno of Agana Heights. Moreno won the Texas Cola Blanca Hunting competition last month. Here is his first-person perspective on winning the 9-pointer division.

What more can I say, but I love to hunt and fish.

I’m a year round fisherman, but there’s just something special about that time of year during the fall and winter months that gets my heart racing. As cooler weather approaches, I start getting ready for deer hunting season.

Instead of spending money on deer leasing, deer feed, deer protein, gas to and from the lease, and all the time one spends fixing up the property, I’ve decided that I would save all year long to do one annual trophy hunt. This is now the 5th deer season that my buddies and I have done this, and we have had some really great results hunting during the rut.

When the rut is on, that means bucks are on the move as they search for does in estrous. Just like teenage boys, bucks have one thing on the brain. I’ve also seen some pretty awesome deer fight and some pretty big monsters from hunting during the rut. Last season, I was able to harvest a 158 7/8” buck. It was an 11-point; 7½ year old that field dressed 205 pounds. It had a nice 23 5/8” spread, and two broken tines from fighting.

This year, I was trying to be picky, but I was already set on going back to harvest a solid 8-pointer or nice 10-pointer we had been seeing the previous mornings and/or afternoon hunts. As the old saying goes…. “All good things come to those who wait” and it sure did.

I spent the early morning hours glassing all over when I saw one that caught my attention. I asked my guide to check it out, as I already knew I wanted this deer. Everything about him was what I was looking for. He told me it was a shooter, and that was all I needed to hear.

It would not stop chasing does though.

I waited over 20 minutes before he finally gave me enough time to get a shot off. I took my deep breath, collected my thoughts, steadied my aim, and when I was ready, pulled the trigger. The double lung/heart shot placement was perfect as the deer dropped right on the spot.

My 6-½ year old 9-point trophy deer ended up scoring 165 2/8” B&C, had an 18” spread, had a mass of 41 1/8” and field dressed at 195 pounds. This beast of a deer was enough to get me a first place finish for a statewide (including Mexico) deer-hunting contest called the Cola Blanca contest, which means “white tail” in Spanish. More than 2500 entries were taken, and mine was the top deer for my category – Best 9 pointer. There will be an awards ceremony later this year, come September, and all winners must display their bucks. I’ll be proudly displaying this bad boy at the ceremony, but also, for many years to come!