The JFK Islanders were two outs away from elimination after trailing 5-4 in the top of the 7th inning. Instead of a Cougars championships celebration, the Islanders would end the game on a 3-1 run to defeat the Cougars 7-6 Wednesday evening at the Okkodo Field to force the Saturday ‘IF’ game. 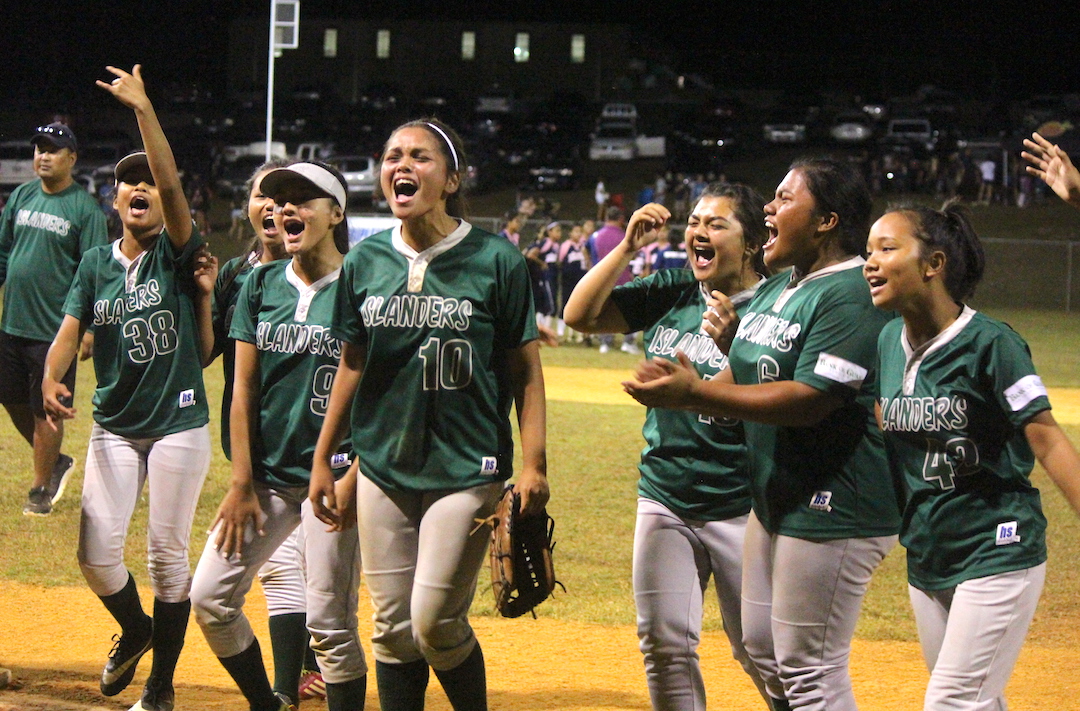 The JFK Islanders were two outs away from elimination after trailing 5-4 in the top of the 7th inning. Instead of a Cougars championships celebration, the Islanders would end the game on a 3-1 run to defeat the Cougars 7-6 Wednesday evening at the Okkodo Field to force ‘IF’ game this Saturday at 10 am.

Islander Pillar George had the weight of her team on her back as she stepped up to bat with one two away, trailing 5-4. George hit a ball deep left as Academy Cougar outfielder Rhia Pangindian quickly got under the ball, waiting for what should have been a rally stunting out. Instead, the sure-handed outfielder let the ball slip out of her glove allowing George to sprint to second base, igniting the Islander sideline.

“I was so scared when I saw the ball flying, I really thought it was going to be an out. All I was thinking was how bad I let my team down. But when the ball dropped, my legs sort of moved on its own as I ran,” said George on the big play.

Then, teammate Narissa Blaz smacked a single on the next at bat and managed to beat the ball to the first bag. The Cougars attention was directed at first which allowed George to trot safely home from second to knot the game at five runs each.

The next action came from an RBI double hit by Vianka Leon Guerrero, allowing Narissa Blaz and Olivia Iriarte to take the leading runs. The score was now 7-5, all that was left in the game was to stop the Cougars offense from taking the lead.

“Everything escalated, I was so nervous,” said Leon Guerrero. “We just needed to get on base and score.”

The Cougars tried to answer the JFK rally in the bottom of the 7th as slugger Juliana Nelson managed to get to second base off an Islander error. Nelson was then brought in by teammate Ashley Mendiola, but Mendiola was tagged out at third base trying to advance after an infield error from JFK.

George earned a strikeout on the final JFK out, but the team didn’t realize that they had won the game as they got off the field preparing for another inning.

During the first inning, the Islanders didn’t reach base at all, after being shown no mercy from Ashley Mendiola and her Cougar Defense.

The bottom of the first brought the crowd the entertainment of a single run. This opening run was hit by Pitcher Ashley Mendiola, an RBI single, which let first on the line-up Kiana Rivera score, making the score 1-0, Cougars taking an early stand.

The Islanders tied up the game in the top of the second inning. This score was contributed by Vianka Leon Guerrero, which was an RBI single, giving the clear to runner Narissa Blaz. The score was now tied at one.

In the bottom of the second, two Cougar Runs were scored. One of these runs came in when Isabella Muna stole home. The other one came along when Doriaun Calvo hit an RBI single. The score was 3-1 at the end of the second inning.

The Islanders continued their fight in the beginning of the third inning, after scoring another lone run. This run was added when Pillar George hit a sacrifice fly for Isabel Itliong-Cruz. This made the score 3-2.

The Islander defense shut down the Cougars offense while their offense did some catching up in the top of the fourth. JFK scored two runs in the top of the fourth inning, Both of these runs came from RBIs, one of which was an RBI double, allowing two runners to take home. The other was an RBI single, allowing Vianka Leon Guerrero to score. The Islanders took the game 4-3.

The Cougars scored two more runs in the bottom of the fifth inning, both of which came from an RBI double, slugged by Ashley Mendiola. The Cougars took back control of the game, 5-4.

The only action in the whole sixth inning was a dog crossing the outfield, and a single hit by Erynn Blaz.

Then came the rally of the Islanders. Pillar George, JFK pitcher, hit a single. This was followed by an RBI single hit by Narissa Blaz, tying up the game at five.

The Cougars managed to score a last run in their last opportunity, this came in from an RBI hit by Mendiola.

The winner takes all Saturday morning at 10 am at the Okkodo Field.