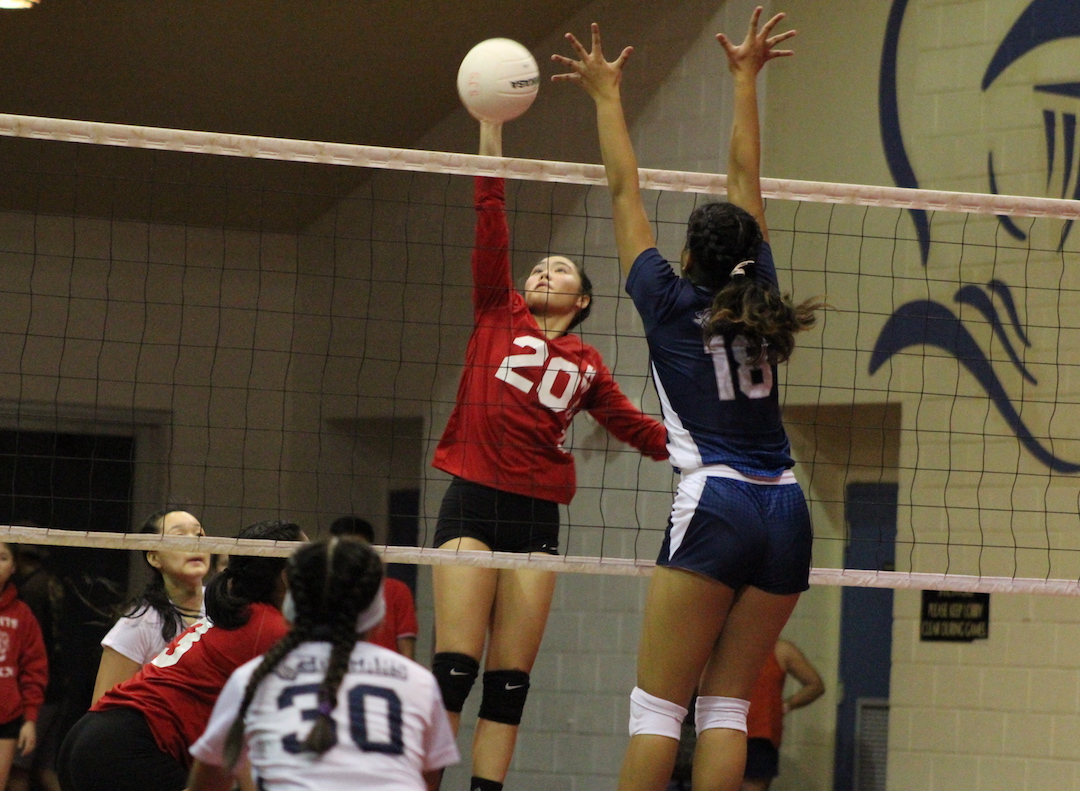 The Cougar middle blockers Theisen Taimanglo and Laressa Halladay weren’t giving Knights freshmen hitter Tylee Shepherd much room to get going, sending back three of her shots early in the second set and a pair in the third set.

Instead of hanging her head, Shepherd unloaded more power in her swings which proved to be the difference down the stretch of the pivotal 3rd set.

“[Halladay] can really get over the net. My teammates just kept telling me to keep swinging because the harder you swing, the harder it will hit off of her block and out, so I just keep swinging.”

Knights setter Hana Fernandez gave Shepherd a pass to the outside where she dropped a hammer on the Cougar backline for a 21-18 lead. Shepherd was then met by Halladay on the next play where she welcomed the contest and smashed a kill off the block for a 22-18 lead.

“It gives me a lot of confidence knowing my team turns to me in those situations. It really helps me get into the game,” added Shepherd.

Fernandez gave the final opportunity to standout Hallie Wigsten, who sent a speedy shot to the Cougars backline that never made it back, giving St. John’s the coveted victory in the two teams first meeting since the Shieh Pre-Season Volleyball Tournament, where the Knights also defeated the Cougars

“Like all teams, the Cougars got a lot stronger, but so did we,” said Knights setter Fernandez on meeting the Cougars in the regular season. “It’s great for us to come out with a win like this when both teams are giving it their best. It was a good opportunity for us.”

Wendy’s Player of the Game Hana Fernandez and Tylee Shepherd.

The sophomore sensation Wigsten came out firing on all cylinders in the opening set, registering four monstrous kills with her Knights leading 8-4 early. Wigsten added an ace during to further their lead 16-9 at the sets midway point before the Cougars would make their run.

Halladay made the most of her minutes, getting a big kill down the middle on her first possession to start a Cougar run, trailing 16-11. During a 7-2 run, outsider hitter Lauren Hoebing aided with a kill and an ace with Academy chipping away at the momentum. Errors would do the Cougars in for the 1st set, but momentum had shifted with their hitters getting quality kills in set.

Wigsten came away with six kills alone in the opening set.

Academy came out serving strong in the 2nd set, getting three aces while Halladay went two hands on a block up the middle to give her team a 12-5 lead. Leading 14-7, errors would rear it’s ugly head for the Cougars which allowed the Knights some positive takeaways as Shepherd guided her team from the service line to tie the game at 15, part of am 8-1 run.

Taimanglo took command in the clutch as she pounced on a free ball, smashing a big kill for a 22-20 lead. Theisen then went on the defensive, stuffing Shepherd and Wigsten at the net on back-to-back plays to give the Cougars the 25-22 2nd set win.

The final set was close all throughout, with both teams trading points until late in the set where Shepherd’s number was called. Shepherd grabbed a big kill to give her team an 18-16 lead, and then another a few plays later to go up 21-17. Academy went on a short run of their own with Hoebing at the line to get within 22-21, but the Knights stayed aggressive getting their final three points off kills.

Now that Round 1 of the season is in the nearly books, both teams will be getting ready to meet the league for another time starting Saturday.

“We have to keep battling and come to each game with lively spirits,” said Fernandez on the Knights approach to the second half of the season. “If we play together and play strong, we’ll accomplish whatever goals we have set.”

St. John’s will host the Southern Dolphins Friday and the Cougars will travel up North to face the Sanchez Sharks.

Knights Hallie Wigsten gets a kill past the Cougars block. (photo by Robert Balajadia)

Cougar Theisen Taimanglo celebrates after getting a block to win the 2nd set. (photo by Robert Balajadia)

Cougar setter Victoria Smith goes over where she wants the pass on defense. (photo by Robert Balajadia)

Cougar Shannez Munoz attacks from the right side in the 2nd set. (photo by Robert Balajadia)

Cougar Laressa Halladay gets over the Knights for a big kill in the 1st set. (photo by Robert Balajadia)

Tylee Shepherd tests the block in the opening set. (photo by Robert Balajadia)