PXC 56: AMBROSE VS ASHIDA TO HEADLINE, JONES OUT

Big news from the PXC 56 Weigh-Ins this morning, the title fight between JJ Ambrose and Takahiro Ashida will now headline the event after weight complications forced Trevin Jones to miss his fight against Stephen Loman. 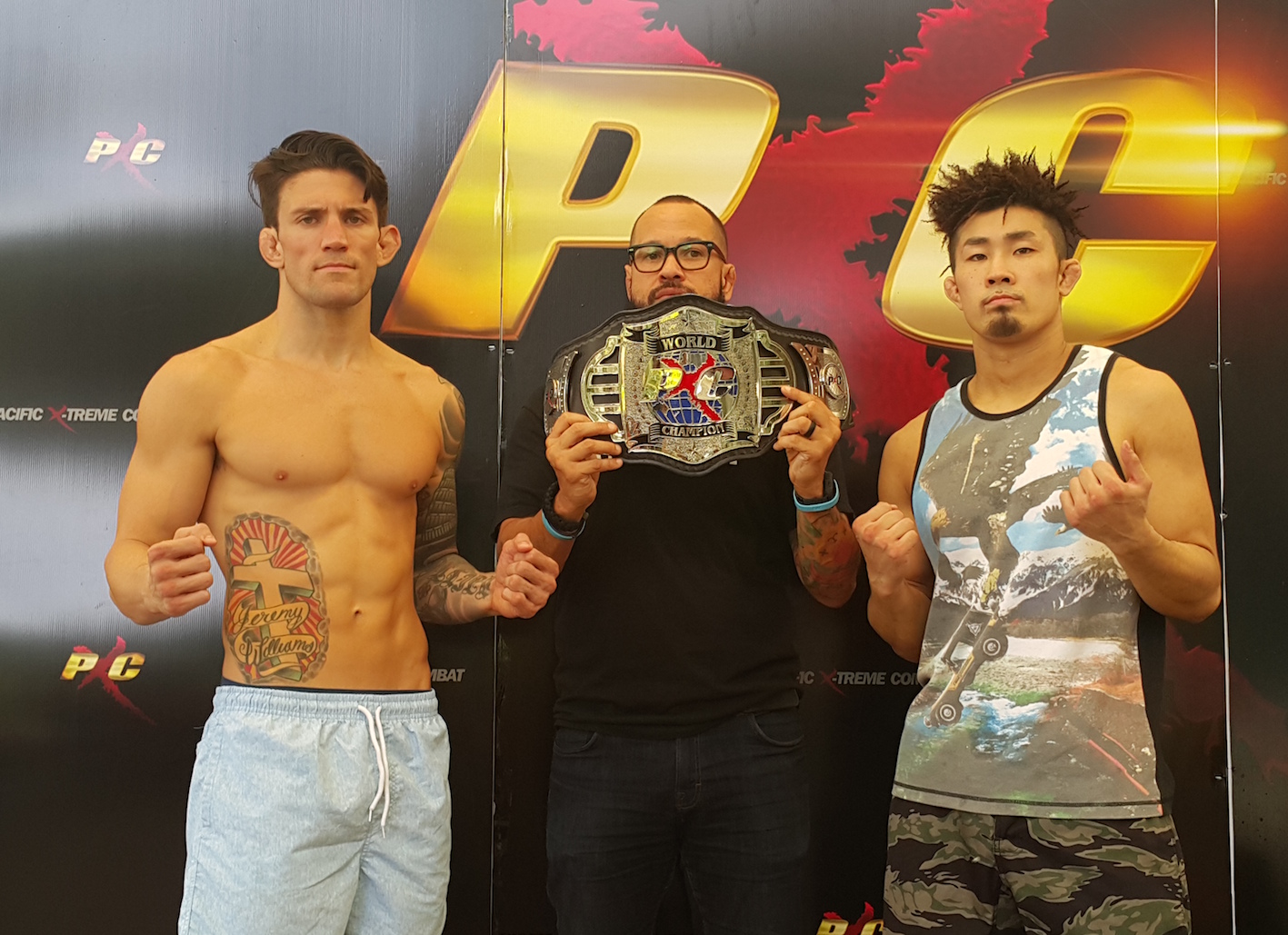 Guam’s ‘Superman’ J.J. Ambrose and Japanese fighter Takahiro Ashida will now headline Pacific Xtreme Combat (PXC) 56 scheduled for tomorrow night at the Calvo Field House after the PXC bantamweight title fight was cancelled. The other co-main event between bantamweight champion Trevin Jones and Filipino fighter Stephen Loman was cancelled after Jones had complications during his weight cut. The announcement was made by PXC announcer Chris Barnett at the weigh-ins at the PIC amphitheater.

Ambrose (26-7) and Ashida (17-7) will fight for the vacated lightweight title. Ambrose is a submission specialist getting 18 of his 26 victories by submission, Ashida has knockout power with eight KO’s. “Unfortunately my original opponent pulled out a few weeks ago and Takahiro came in to replace him. My camp didn’t have a whole lot of time to prepare for him but in retrospect he hasn’t had enough time to prepare for me as well so we are both on an equal field,” said Ambrose.

Ambrose will be fighting on the same card with two teammates, Charlie Alaniz and Jeff Mesa. All three fighters had their training camp at Steel Athletics. Alaniz (8-2) will take on Seigo Yamamoto (2-2) in the 125 lbs weight division and Mesa (2-1) will go up against Hawaiian 808 Fight Factory fighter Kai Kamaka III (2-1) in the 135 lbs weight division.

Saipan’s Kelvin “the Big Hit” Fitial (13-8-2) said he’s ready to put on a good show for the local fight fans as he will take on Benjamin Sosoli (3-1) from Australia. Sosoli will have a size advantage over Fitial after he tipped the scales at 263 lbs, Fitial weighed in at 239 lbs.

“My opponent is a good wrestler and I’m more of a stand up fighter, I’ve been training really hard for this fight and I will be prepared. I urge everyone to come out because it’s going to be a bang and there will be some fireworks,” said Fitial. “If you haven’t bought your tickets for PXC, I urge you to come and watch my fight. I have some surprises for everyone; you will see a new Kelvin. It’s been a year since my fight with Roke (Martinez) and I’m ready for this fight.”

Another fan favorite will be Saipan’s Shane ‘Pikaboo’ Alvarez. Alvarez (12-4) will fight against submission specialist Michito Abe (12-6) from Japan.

Tickets are still for sale online at www.tpiguam.com for general admission tickets, VIP tickets are on sale at Cars Plus in Maite. Here are the official results from the weigh-ins held Friday afternoon at the PIC amphitheater: