With their sights set on the prize and not ready to go home, the FD Friars outlasted their latest rival the Harvest Christian Academy Eagle in a 4-3 shoot-out at the GFA Training Facility in Harmon. Neither the Friars or the Eagles could find anything through out regulation, OR overtime. 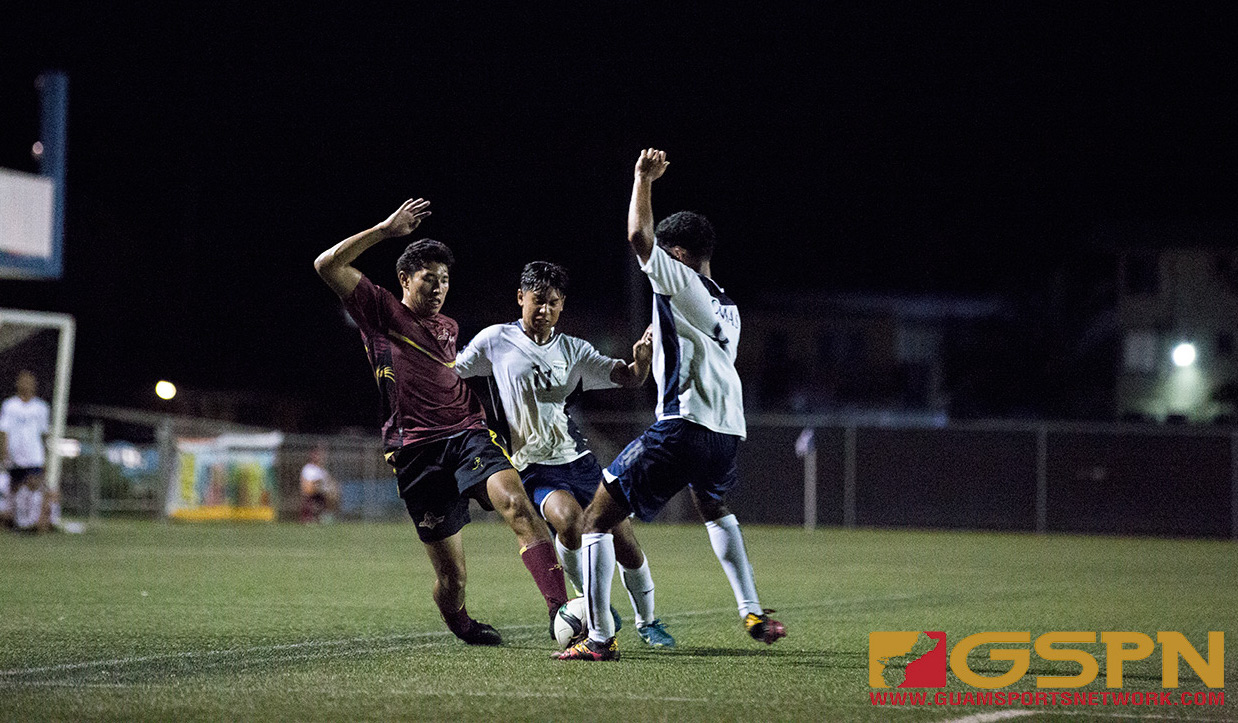 With their sights set on the prize and not ready to go home, the FD Friars outlasted their latest rival the Harvest Christian Academy Eagle in a 4-3 shoot-out at the GFA Training Facility in Harmon. Neither the Friars or the Eagles could find anything through out regulation, OR overtime.

A shoot-out decided this one, in which Father Duenas scored one more than Harvest to advance to the Championship.

Both teams came out eager to get this one behind them and advance. Father Duenas started off routinely for them as they were the clear aggressors in the early goings of play. The front line of Aiden Dickson, Preston Boynton and Josh Calvo were relentless on the attack.

The Friars had no trouble navigating through the defense, but on several occasions couldn’t find the back of the net to finish it out. Harvest, meanwhile struggled with the Friars back line. The Eagles weren’t able to get close to the net as Shawn Sablan and GianCarlo Abril made sure of that with shut down coverage.

Harvest Senior Clayton Mitchell had a chance just before halftime, but couldn’t shake the tough maroon and gold defense. Both teams went into halftime knotted up at nil.

The second half saw much of the same type of play from both sides. Neither team successful on offense, a trend that would continue. Eagles had better chances, and were able at the time to get a step up on the fatigued Friars “D.”

Mitchell had a couple of more shots on goal, but couldn’t get past the wall that was the FD’s goalie. Friars feeling time slipping away played with urgency in the final minutes. Father Duenas, got great efforts and hustle by everyone up front as the storm of shots fired came close, but Junior Kaitso Atsuta was a wall not letting anything past him.

With the crowd thirsty for ANYONE to score, the final whistle blew with the score tied at 0-0.

IIAAG rules for overtime in soccer state that two full 5-minute halves should be played. They were and STILL neither team could net one, as both were equally matched and tired. Still, after no score, only one way left to determine the winner, SHOOT-OUT!

5 players from each side were chosen. Father Duenas’s Aiden Dickson stepped up first to score easily as he kept it on the ground and opposite side from the keeper.

Harvest started off the foot of Clayton Mitchell who answered with his own finesse shot to even it out and 1 all. Xavier Naputi and Eddie Huang were the next round, as both made it to keep things even as did GianCarlo Abril and Kanta Terai.

The third round saw the first costly mistake. Harvest Eagle James Lee lined up and kept it low and slow. Friars Shawn Sablan handled it easy in front of him for the stop!

The Friars needed just one score to advance, but Joshua Calvo couldn’t fool Atsuta and was stopped giving Harvest a chance. Halehale would put on his super hero cape and nail the eventual game winner to give FD a 4-3 lead.

Taking the final shot for the Eagles was the goalie himself, Atsuta, as he lined up perfectly and had a good touch on the ball, but put just too much on it as it sailed over the net, much to the rejoice of Friar nation who erupted in the victory.

Father Duenas won the battle of patience in a shoot-out 4-3. Friars will face the JFK Islanders in the Championship on Saturday at GFA.