SEMIS: ISLANDERS SHAKE OFF SLOW START TO DOWN DOLPHINS

The top seeded JFK Islanders used a second half resurgence to beat a tough Southern Dolphins squad to advance to the IIAAG Soccer Championship Game. 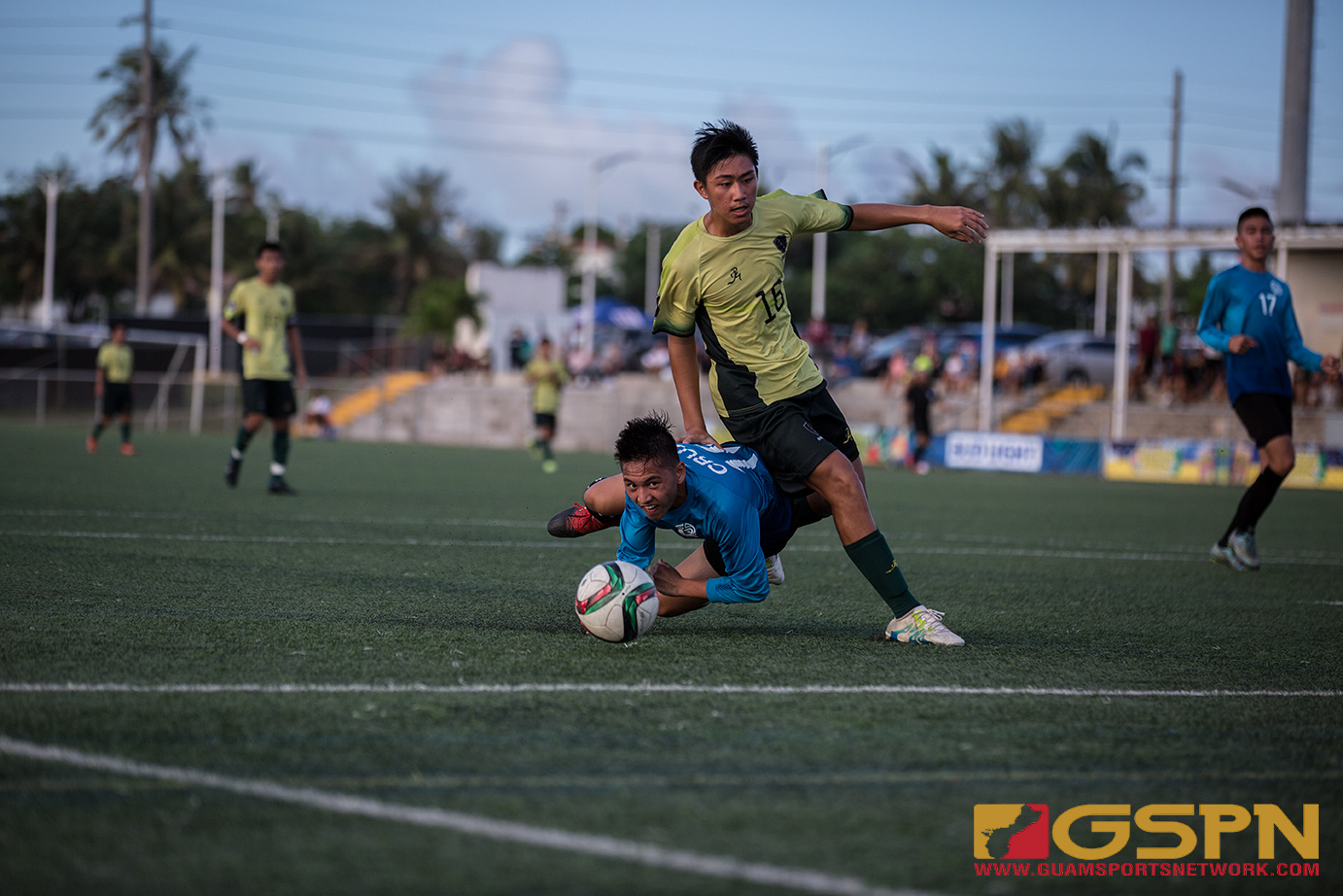 For 39 minutes, the JFK Islanders struggled to break through the Southern Dolphins defensive wall during their semifinals showdown at the GFA Training Facility in Harmon Wednesday night.

The #4 seeded Dolphins rose to the occasion and put forth their best effort, but a second half resurgence from JFK proved too much as the Islanders ran away to a 5-1 win to advance to the Boys Soccer Finals on Saturday.

Game time for JFK vs. FD is set for 7 pm, following the consolation game between the Harvest Eagles and Southern Dolphins.

The Dolphin defense played a stout first half led by keeper John Topasna, who came away with four big saves to keep JFK off the boards early. It wasn’t until the 39th minute that the game saw it’s first goal as froward Tayler Bonner was the beneficiary of a cross-kick to net one for JFK, taking a momentous 1-0 halftime lead.

“It was difficult in the first half because [Southern] was playing a high line so every time we tried to play the ball over and behind, they’d push up and we’d be called for offsides. Once we got that first goal, we felt we had all the momentum on our side and we just took it from there,” said Bonner.

Bonners score woke up the dormant Islander offense as they played a very aggressive second half.

League MVP Takumi Ito raced up the left side of the field before crossing a kick to Christian Kido, who used a single tap to set up teammate Kris Fernandez for a goal at the 58th minute.

Kido would then strike a goal of his own two minutes later, sniping a shot from near midfield that presented Topasna with trouble as he tried to one-punch the deep shot away as it rolled in the net to give JFK a quick 3-0 lead.

Ito drew a personal foul inside the box in the 67th minute to make good on a penalty kick to put the game on ice 4-0. The MVP of the league didn’t feel any kind of pressure despite Wednesday night’s game being his first since winning the award.

“I’ve been in a lot of big games before so there wasn’t that much pressure. My team did a great job at supporting me all season and today we did great to win the game,” said Ito.

Islander Michael Casteneda kicked in the final goal in the 77th minute, but the Dolphins managed to avoid the shutout as forward Dylan Fegurgur scored his teams lone goal at the 80th minute.

The Islanders have been playing confident all season and the newly crowned MVP Ito has no lack of faith in his team heading into Saturday’s finale.

“I’ve always been confident in this team. We just have to remember to have fun in that game,” said Ito.

Dolphin keeper John Topasna stretches out for a first half save. (photo by Michael Ebio)