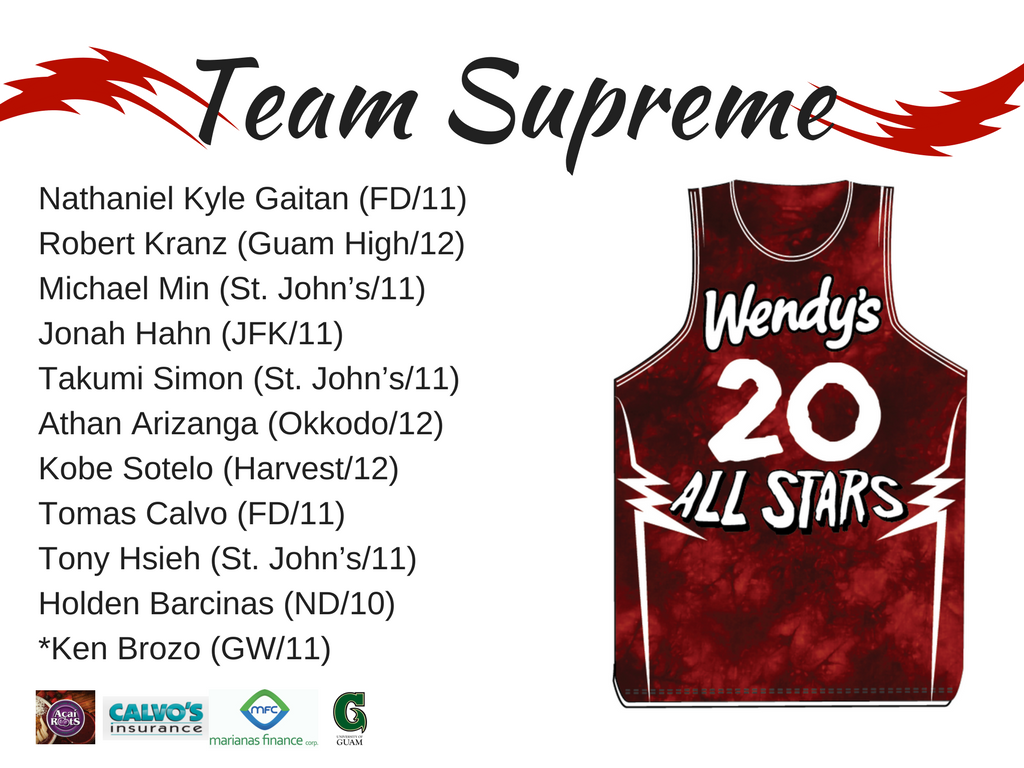 The third annual Wendy’s Boys Basketball All-Star Game presented by GSPN is set to rock the FD Phoenix Center on May 29 to end your Memorial Day weekend!

Team Elite, under St. Paul Warriors head coach Neo Pineda, and Team Supreme, under FD’s and Guam National’s EJ Calvo, have a roster full of the top talents from the 2017 boys basketball season ready to tip-off.

Events will be going on all night long which include a blind free-throw contest, 3-point contest with some of the stars from the GBA and a half-court shot from Buddy’s Home Furnishings. Wendy’s will also be giving away $500 award to the basketball club with the highest numbers in attendance!

On the Supreme side of the court, familiarity will be a strong asset. Head coach Calvo paired up his squad with natural teammates throughout the high school season as well as those who have played together for the Junior Nationals team, giving his team a supreme boost in chemistry.

“We’re going to play a real simple game early and spread the offense that should be able to push the ball up the court. It’s going to be a fun and uptempo style of basketball, but I don’t know how to coach a team without talking about defense and getting into your man,” laughed Calvo.

The first pick of the draft was FD’s Nathaniel Kyle Gaitan, who’s excited to get the chance to play in yet another All-Star game, but first as a Friar.

“Our team chemistry is coming along, we are very familiar with each other’s games. We will definitely bring our competitiveness and we will for sure have fun,” said Gaitan.

Calvo also manage to round up all three of the St. John’s Knights core stars in Michael Min, Takumi ‘Curry’ Simon and versatile swingman Tony Hseih. Min and Simon represented in the first ever Wendy’s All-Star Game making them the most veteran of the event.

With Calvo also being the head coach of the Men’s National Team, practicing with the group has allowed him to scout future National level prospects.

“These kids will be playing with the best of the best in their age group on island and we’ve had a few weekends with full attendance. I’ve been trying to get a good look at them for the National Program and give them advice on what they need to do if they want to play college ball,” said Calvo.

Check in with Team Elite and gear up for all the exciting action next Monday!