The FD Friars played host to the defending champion Harvest Eagles Tuesday evening as the 2018 IIAAG Boys Volleyball season tipped off. FD got a big night from outside hitter Aidan McDonald, who registered 14 kills in their 25-13, 23-25, 25-16 win. 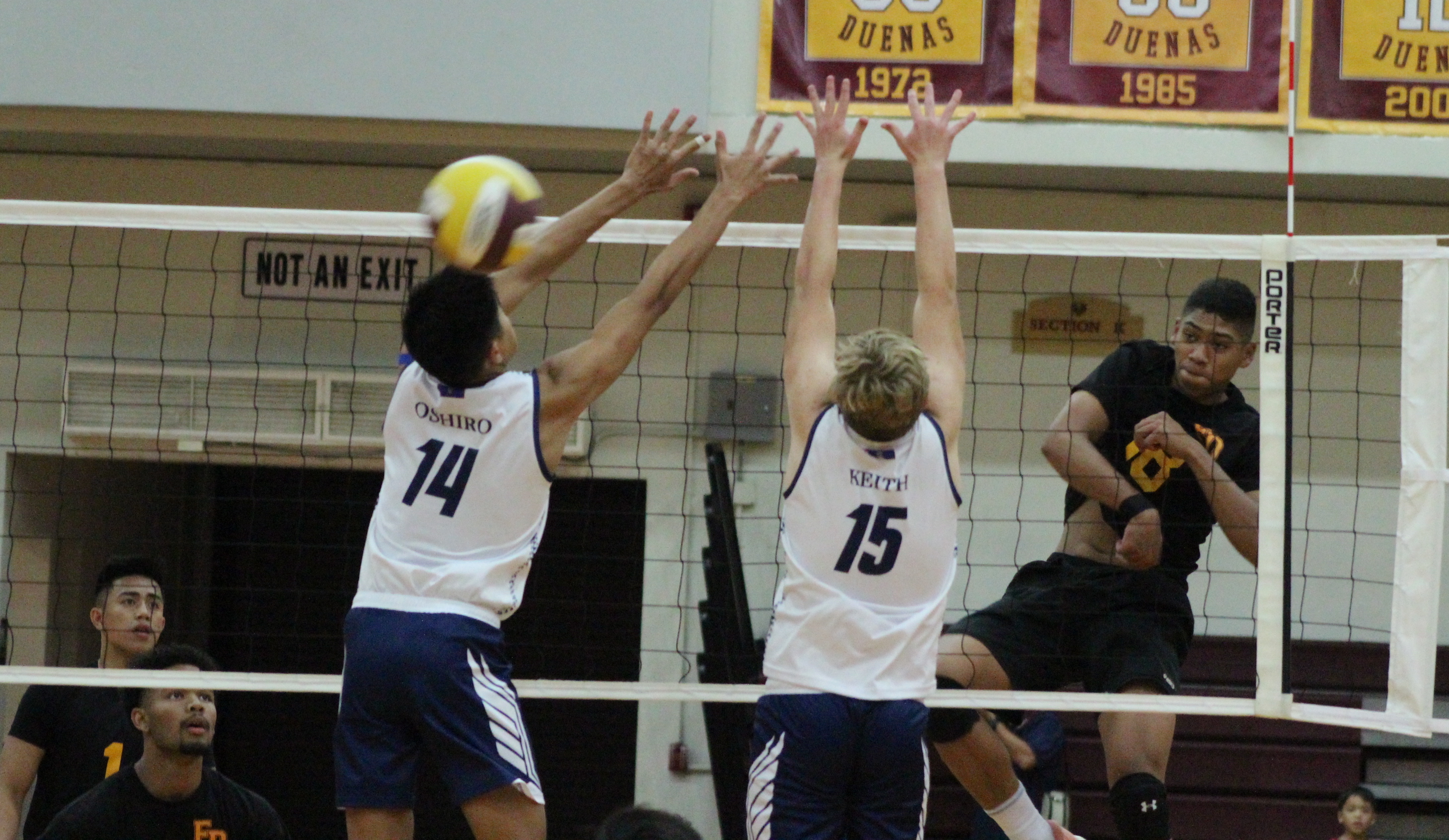 The FD Friars played host to the defending champion Harvest Eagles Tuesday evening as the 2018 IIAAG Boys Volleyball season tipped off. FD got a big night from outside hitter Aidan McDonald, who registered 14 kills in their 25-13, 23-25, 25-16 win.

The loss proved to be the Eagles first since going unbeaten in 2017 while winning the title.

McDonald got in his groove early, registering five kills in the opening set with five more coming in the second, despite splitting the set to force a third. McDonald kept going after it, finishing the final set with four more kills thanks to some well placed sets from teammate Logan Pangelinan to put the Eagles away.

“[Aidan] more often than not is going to be on his game. I like to see what is working and tonight Aidan was our big gun,” said Pangelinan on setting up McDonald on the night.

The opening game win was big for the Friars despite it being as early as a season can be. Beating the defending champions, no matter when, is always a hurdle that all teams set out to accomplish.

“The win was big because of the fact that they are the defending champions. Beating them gives us more confidence in everything we do,” said McDonald on the win.

“Anytime we can get a win over a tough team is a confidence builder. But We’re going to play them again in the second round of the season and we know that’s going to be another tough battle,” said Friar head coach Steve Pangelinan.

Wendy’s Players of the Game – Aiden McDonald and Logan Pangelinan.

After getting shaken in the 1st set, the Eagles got a big lift from seniors Mason Caldwell and Clatyon Mitchell. Harvest quickly jumped out to a 5-0 lead behind the serving of Caldwell, but their lead would quickly evaporate due to unforced errors.

Caldwell kept the Eagles ahead off a kill from a free ball 13-12, but a long back and forth in-between the set resulted in the Friars taking their first lead 23-22 with Kyle Gaitan serving. An error from the Friars left the door open for Eagles Alan Thomas and Mitchell to secure the final two kills to force the pivotal 3rd set.

“We started the 2nd set really slow and it really showed tonight that whoever came out faster and more ready in the set that they were going to win it,” said Logan on fighting for the 2nd set.

Coach Pangelinan was fully expecting the Eagles to show some mettle and the 2nd set was where he saw how dangerous the team could be.

“We saw Harvest in the pre-season so we know how strong they are. Even though we won the first set we knew we needed to keep the pressure on them. But that’s Harvest potential, we’re never going to take them lightly,” said coach Pangelinan.

Friars put it away

The Friars settled in and came out with the same intensity they displayed in the opening set, storming out to a 12-4 lead with McDonald, Pangelinan and Gaitan all registering kills in the run.

A Pangelinan ace off a jump serve gave the Friars their largest lead of the night 17-5 as they started to work in fresh rotations. The Eagles tried for one late rally after Mitchell posted back-to-back kills while still trailing 22-11, but a nasty McDonald kill followed by a pair of Eagle errors put the game to rest.

As stellar as McDonald was, coach Pangelinan noted that getting McDonald those looks was a total team effort.

“[Aidan] is a big part of our game, however, he’s not able to hit the ball if the defense doesn’t pick up the ball or set it out to him so it’s always a full team effort.”

The Friars make a quick turn down South as the prepare to face the Southern Dolphins while the Eagles will play the ND Royals this Saturday.

Friar Aiden McDonald powers one of his five kills in the 2nd set. (photo by Robert Balajadia)

The Eagles celebrate after ending the 2nd set off a kill from Clayton Mitchell. (photo by Robert Balajadia)

Eagle Mason Caldwell leaps out left for a kill through the defense. (photo by Robert Balajadia)

Eagle James Jeong is met by the Friars McDonald and Kwon on a free ball. (photo by Robert Balajadia)

Friar Brandon Mendiola gets the game started with a kill up the middle. (photo by Robert Balajadia)