This past Sunday, Round 6 of the ten round 2018 Monster Energy Guam Motocross Championship was held at the Guam International Raceway located in the northern village of Yigo. 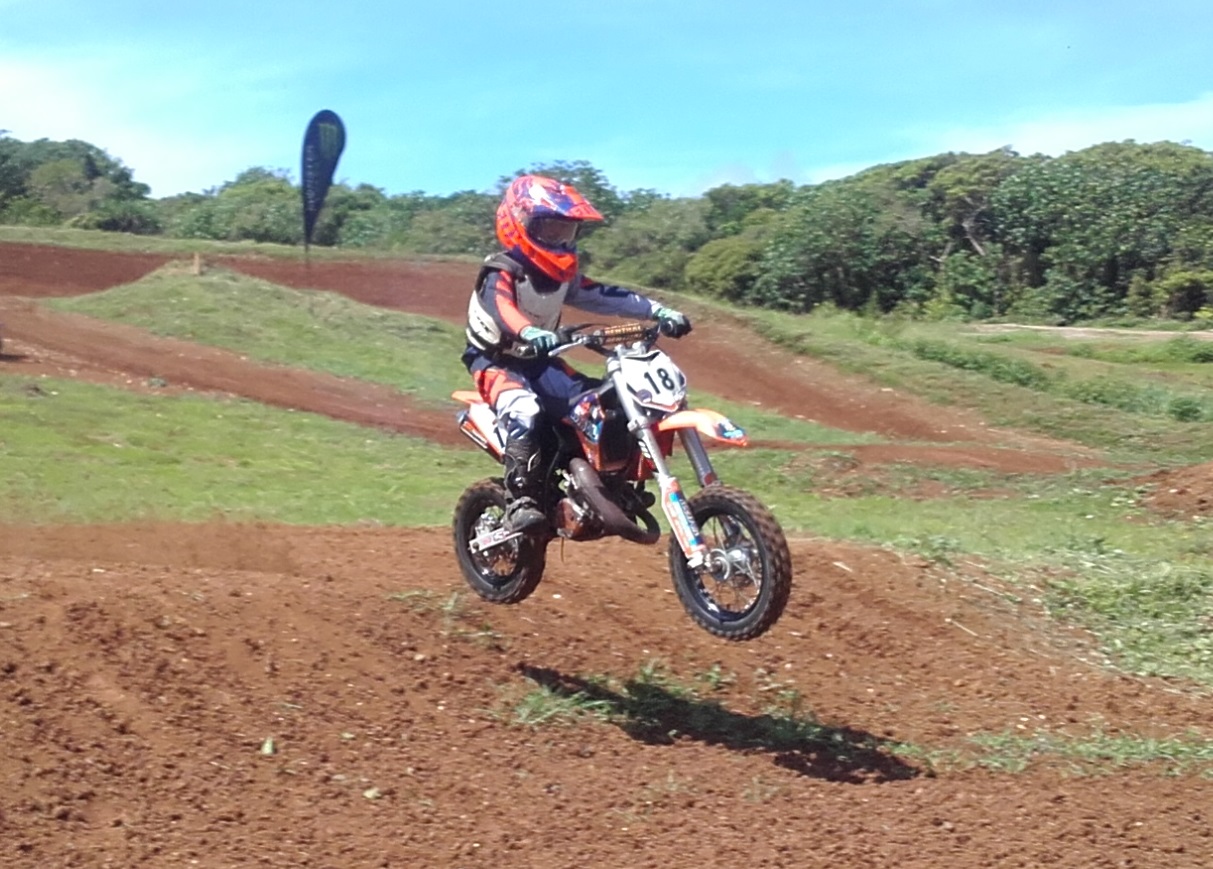 This past Sunday, Round 6 of the ten round 2018 Monster Energy Guam Motocross Championship was held at the Guam International Raceway located in the northern village of Yigo. With a few early morning showers that had cleared up to become sunny skies the race course was left at its best thanks to Mother Nature with a challenging layout that had competitors banging and bumping as they soared high over the many jumps that infest the course. Free to come out and watch with the racing having kicked off at 11:30 that morning and went on late into the afternoon. Classes ranged from 50cc on up motorcycle and atv kids classes to the novice and expert classes on the full sized motorcycle and atv machines.

In the Open Motorcycle class in heat one #31 Tim Wenden aboard his Rocky Mountain Precast supported KTM took the early lead off the start but was quickly being challenged by #1 “little” John Aguon aboard his Ground Tech Services supported Yamaha. Following up in third was #59 Honda mounted Robert Terrel.  The #31 Wenden originally from New Zealand and making Guam now his home was on fire hitting the jumps faster and harder each lap as he pulled away from the rest of the field. Wenden easily took the round 6 win with #1 “Little” John Aguon in second and #59 Robert Terrel in third. Wenden with 269 points has now closed up to a single point behind the current Monster Energy Guam Motocross Championship Open Motorcycle class points leader #1 John Aguon with 270 points with four more rounds yet to be contested.

In the Open Atv class #83 Daniel Champion aboard a TJ Enterprises/Gold Speed supported Suzuki was flawless taking the lead over the field right from the start gate and leading all the way to the finish. Taking second was #4 Robert Bucek on the Cycles Plus Suzuki with Yamaha mounted #8 Mike Taimanglo in third. With his win the #83 of Dan Champion has taken the win in every round held this year and leads the championship with 300 points a perfect score over the Cycles Plus Suzuki of #4 Robert Bucek with 264 points and the charging #22 Yamaha of Kenneth Tedtaotao with 198 points.

In the Open Minibike class #23 Jordan Leon Guerrero aboard the LG Racing Kawasaki took the class win with #10 Jerrin Nauta on a Kawasaki in second and #33 Ethan Blyth on a Kawasaki placing third.

65cc Kids Minibike class first was #22 Wyett Santos on a Kawasaki, second was #31 Richard Wenden on a KTM, third #21 Jessani Leon Guerrero on a Kawasaki, fourth was #33 Mariana Wenden.