The High School Boys Pre-season Volleyball Tournament wrapped up pool play Friday night at the Tiyan Gym. The top teams will enter the one day playoff eliminator on Saturday and championship game will start at 4pm. 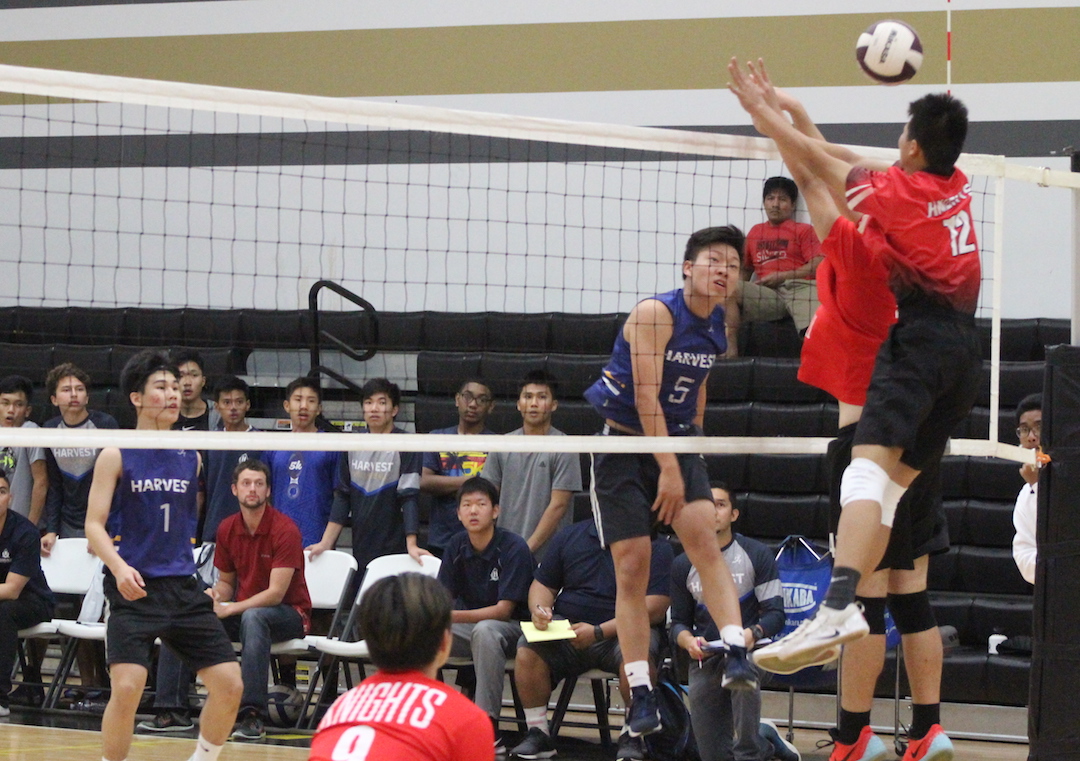 The High School Boys Pre-season Volleyball Tournament wrapped up pool play Friday night at the Tiyan Gym. The top teams will enter the one day playoff eliminator on Saturday and championship game will start at 4pm.

The host team Tiyan Titans continued to dominate the preseason tournament with a straight victory (25-22, 25-22) over the St. Paul Warriors. Tiyan’s Ramil Padigos is confident his team will do well heading into the regular season.

After dropping their opening match to the FD Friars on Thursday, the defending champion Harvest Eagles look to repeat as IIAAG champions. The Eagles played back-to-back games on Friday night and defeated the St John’s Knights in straight sets (25-19, 25-18) and later split their match with Sanchez (25-13, 23-25).

“We have a lot of new players this year and we are looking to get that bond and team chemistry going before the season starts,” said Thomas.

The Eagles lost three key seniors to graduation and head coach Kevin Inafuku who moved off-island. Despite the huge loss to their organization, Thomas said the Eagles should still be a strong team this season.

“We lost our captains from last year but our foundation from our coach is still the same and it’s our mentality that we are continuing,” said Thomas.

A team under the radar are the Sanchez Sharks who ended up winning a set against the Eagles and the FD Friars. Sanchez dropped their opening sets against both teams but managed to win the second set in both contests.

“The wins tonight are going to help with our confidence,” said Shark Matthew Pascual.

Pascual recorded clutch kills late in the second set against the Eagles to help the Sharks get the victory.

“This tournament will help us get better before the season starts. We know we need to get better on defense, passing and at the service line,” said Pascual.

The Friars were denied back-to-back championships last season after losing their semi-final matchup against the Tiyan Titans. Aidan McDonald said the loss made his team even more hungry to get back to the championship game this season.

“That loss in the semi-finals last season (agaisnt Tiyan) will motivate the team to do better this year,” said McDonald.

McDonald and teammate Kyle Gaitan put on a power hitting clinic in their opening set against the Knights to win 25-12. The Friars second unit took over in the second set and continued to do well on offense and defense with newly added DeAundre Cruz patrolling the net. The Friars won the second set 25-16.

“Like every other team there’s still alot of room for improvement. We need to fine tune our passing and defense and also work on improving our team chemistry,” said McDonald.

The Friars along with the Titans head into the pre-season playoffs as high seeds. The action starts in the morning and the championship game is scheduled for 4pm at the Tiyan Gym.