The ND Royals and St. John’s Knights met for the first time since their championship game in 2017. After three wild sets, the top two teams in the league put together an instant classic with ND getting the edge 31-29, 22-25, 26-24. 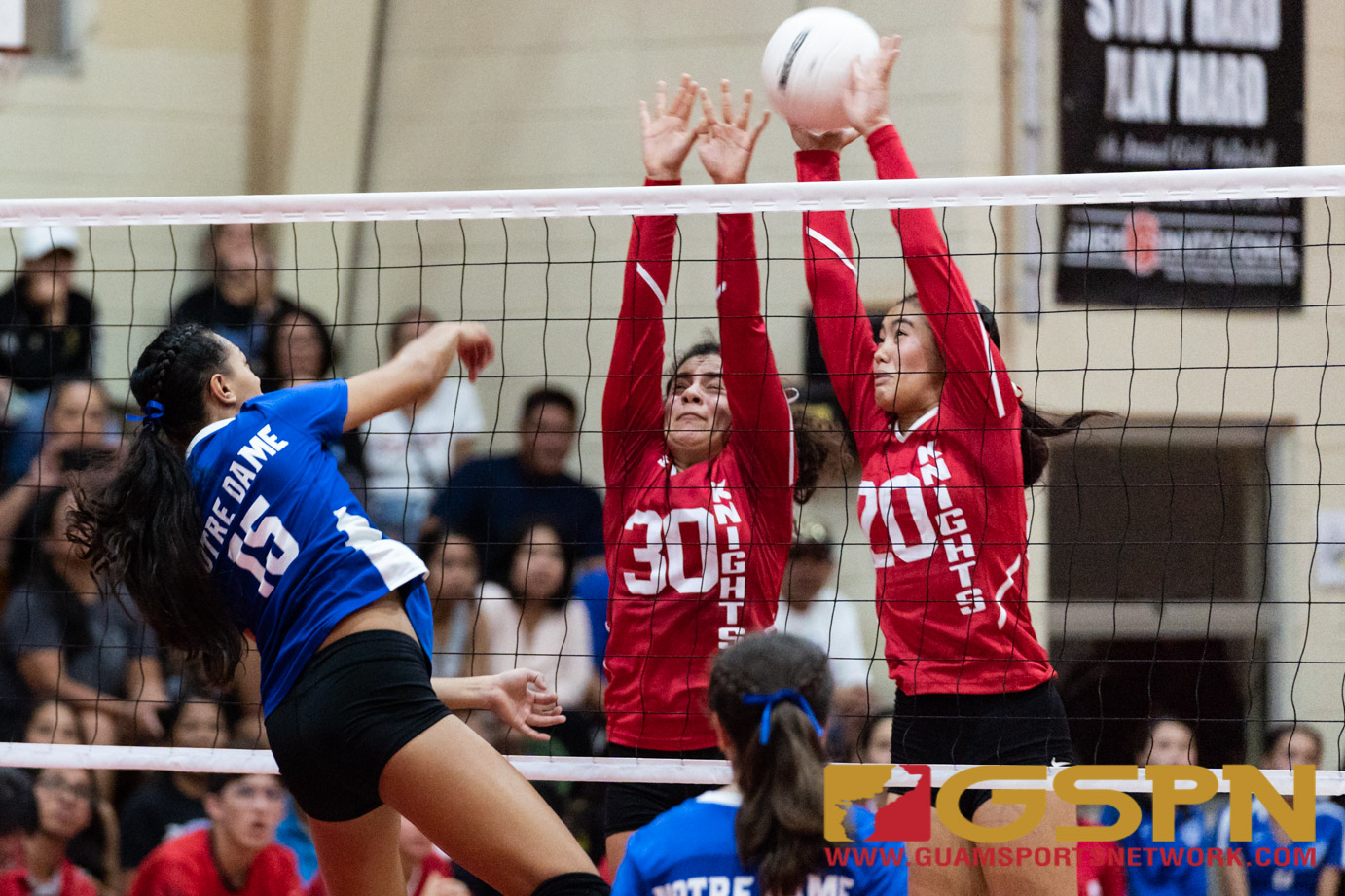 It was scheduled to be another IIAAG girls volleyball regular season matchup, but the atmosphere during Wednesday night was so much more than that. It was a rematch between the defending champion Notre Dame Royals and the St. John’s Knights. The Knights wanted vengeance after their title loss last season and the Royals came into the contest undefeated, committed to defending their title as leagues best.

Coming up clutch were Wendy’s co-players of the game Austia Mendiola and Brianne Leon Guerrero, who are no stranger to such post-game accolades. Mendiola had a game high 16 kills, including a momentum changing kill late in the third set. Leon Guerrero had the final two kills in the opening set marathon 31-29 first set victory.

“It’s was honor to share the court with them,” said Mendiola. “It was great just to be in the same atmosphere and witnessing both teams doing what we love.”

The Knights’ sophomore sensation Tylee Shepherd had a team high 13 kills. Shepherd and the Knights stood their ground against the Royals and Wednesday’s loss will be used as a learning experience heading into the playoffs later this month.

“Im really good friends with two players on their team and Tylee is one of them,” said Mendiola. Mendiola and Shepherd play on the same volleyball club (Haggan) in the off-season.

“We knew they are a good all-around team and we had to play extra hard to get the win,” said Mendiola. “There was some friendly trash talk before the game but no matter what the outcome was we still have a strong friendship,” said Mendiola.

Mendiola set the tone early with middle kills as ND went ahead 16-12. The Knights slowly chipped away at the lead behind kills from Shepherd and Eli Errett to trail 20-18.

Shepherd served up an ace to tie the game at 22. The game then went into a deuce (24-24) with Angeline Del Carmen from St. John’s making a clutch kill. The teams went back-and-forth with ND having three straight opportunities to win, but the Knight passing and defense kept the game going.

The game was tied at 28 and the Knights scored to take advantage with Hallie Wigsten recording a big kill. The Knights looked to win the contest with a 29-28 advantage, but ND turned to Mendiola in the middle to tie the game 29.

LG in the clutch

The Royals turned to MVP candidate Brianne Leon Guerrero twice and she answered the call with two straight kills to win the set 31-29.

“In that moment we are in total focus and we block out the crowd. There wasn’t any special plays set up for (Leon Guerrero), we just trust in our setter Gabby (Piper) because she is so great at moving the ball. She is a focal point of our game,” said Mendiola.

The Knights had their backs against the ropes and a higher sense of urgency in the second set. Shepherd recorded three early kills to help the Knights go ahead 7-4. The Royals surrendered more points off service errors and Errett added insurance points to put the Knights up 14-8.

The Royals finally woke up and seized momentum with Carlie Quinata recording two kills to put her team ahead 17-16. The Knights answered with a Shepherd kill and an ace served by Lauren Alegria to go up 19-17.

The Royals regained the lead with Leon Guerrerro scoring another kill and Minami Rabago making a back row kill to go up 20-19. The Knights retook the lead after a hitting error and never looked back with Shepherd at the service line. The sophomore showed no signs of pressure and made three straight aces to win the second set 25-22.

Royals fans cheer on their team in the action packed game against the home team St. John’s Knights. (Photo by Michael Blas)

Leon Guerrero took to the service line with the game tied at seven and served up eight straight points that featured two aces to put ND up 15-7. ND looked to cruise to victory but the Knights refused to lose and Wigsten led the comeback. With the Knights down, Wigsten recorded a pair of kills to cut the lead to just three points.

The home crowd went crazy after Errett recorded a kill and Hana Fernandez served up an ace to find the Knights suddenly trailing by just a single point (21-22). The noisy crowd caused the Royals to make an error (net) and the contest was tied again at 22.

A service error by St. John’s and a kill from Mendiola quieted the home crowd as ND surged ahead 24-22. Luna Puangco from St. John’s recorded a kill and a hitting error by ND forced the nail-biting 24 deuce.

The Royals called Mendiola’s number and she delivered with her game high 16th kill to go up 25-24. The Knights looked to extend the game but an errant pass followed by a kill attempt went out of bounds to give the victory to the Royals.

Shepherd had 13 kills and a game high six aces. Wigsten had nine kills and two aces for the Knights. The home crowd stayed after the game to congratulate the Knight players on a game well played.

Leon Guerrero had 13 kills and three aces for the game.

“Coach (Mike) Rabago’s message after the second set was to relax and play like we did in the first set. He said we needed to regroup and to try and reduce our errors,” said Leon Guerrero.

The Royals sit alone atop the IIAAG standings and Leon Guerrero said that her team needs to remain focused and to take it one game at a time. ”

We just need to continue to play our game, have fun and don’t dwell on any mistakes.”

Mendiola had a game-high 16 kills to lead the Royals. Mendiola said there is no added pressure being defending champions.

“This is a different team from last year, there’s alot of new faces this year. There is no pressure because we are all playing for each other, our families and our school,” said Mendiola. “It’s going to take a lot of hard work and focus but I’m confident we will do our best.”