The ND Royals girls volleyball team’s first week into their 2018 title defense has been a trial by fire. After hosting the GW Geckos on opening night, the Royals payed visit to the Academy Cougars Saturday evening where they managed to get a close victory while holding off two Cougar rallies. 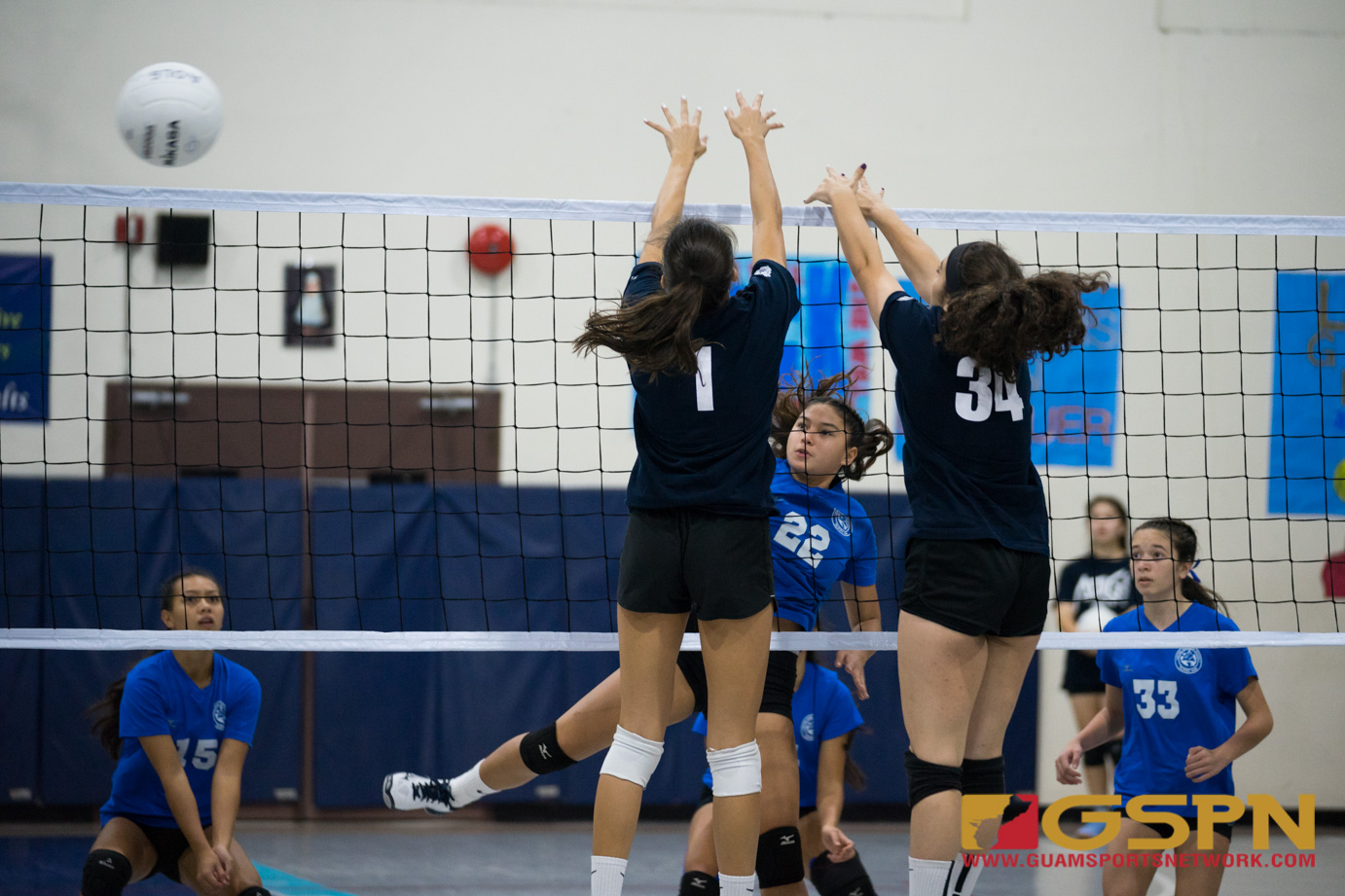 The ND Royals girls volleyball team’s first week into their 2018 title defense has been a trial by fire. After hosting the GW Geckos on opening night, the Royals paid visit to the Academy Cougars Saturday evening where they managed to get a close victory 25-22, 25-23.

Royals sophomore star Austia Mendiola and senior Brianne Leon Guerrero both registered six kills with the pair once again delivering in the clutch. Mendiola also had two blocks and three aces while also delivering the final blow in the 2nd set to secure the Royals win.

“Facing these tough teams has shown us that we can pick ourselves up when we’re down and that we’ll always be fighting ’til the last point,” said Royals Brianne Leon Guerrero.

Cougar Laressa Halladay was the lead lady for Academy with five total kills and two blocks.

The Cougars came back from down seven points in the opening set to get as close as 24-22 before Leon Guerrero scored the final point to win the set 25-22. The Royals were up as much as nine points, 13-4 in the 2nd set, but the resilient Cougars kept fighting back to eventually take their first lead of the set 20-19.

“Academy is a really good team and we were getting a little too comfortable with the big leads we had,” admitted Mendiola. “But we have to have the right mentality and forget about the last play and instead just focus on getting one point, the next point. We shouldn’t let the other teams runs drop our spirits.”

Ella Balajadia gave ND back the lead with a tip 24-23 before Austia put the finishing touches on match.

Academy faltered at the service line with eight errors in the 1st set and four in the second for 12 total. The Royals had their fair share of serving errors with five in the opening and four in the 2nd for nine total.

The Cougars got off to a strong start behind serving from Cassidy Tobiason for a 4-0 lead. Mendiola scored the Royals first point off a kill, followed by a block and another strong arm shot to tie the game at five. An ace from Nicolette Perez gave ND the lead as they started to find their offense.

Leon Guerrero got her first kill as ND took an 11-7 lead to spark a 4-0 run that ended in Mendiola’s second block. The Royals looked in complete control after an ace from Minami Rabago for a 23-15, but the Cougars were quietly brewing a rally.

With Theisin Taimanglo at the service line the Cougars ran off to a 7-1 run. Halladay got going after she turned a perfect pass up the middle from setter Jackie Martinez into a crowd-pleasing kill to get the Cougars 23-19. Halladay would punish a free ball to get within 23-21.

Leon Guerrero would end the rally with a kill that the Cougar defense couldn’t control, 25-22.

Reigning MVP Carlie Quinata started off the 2nd set from the service line, leading the Royals to a 7-0 lead. Back-to-back aces from Perez gave ND their largest lead 13-4.

The Cougars began chipping away at the lead with Taimanglo and Alexandra Lekites scoring kills to get within 17-13. Mendiola would hit misfire on three hits with the Cougars fighting to tie the game at 19. Lekites took a clean pass from Martinez to set up a kill towards the backline for the 20-19 lead.

Both teams would trade points before Balajadia’s tip on a free ball for the 24-23 lead. Leon Guerrero would get the serve over that was returned, setting up a pass from Royals Gabby Piper to Mendiola on the outside for the game winning kill.