Saturday evening marked the first home game for the Tiyan Titans boys volleyball team and they ushered in the new season with a straight set victory over the St. John’s Knights 25-17, 25-16. 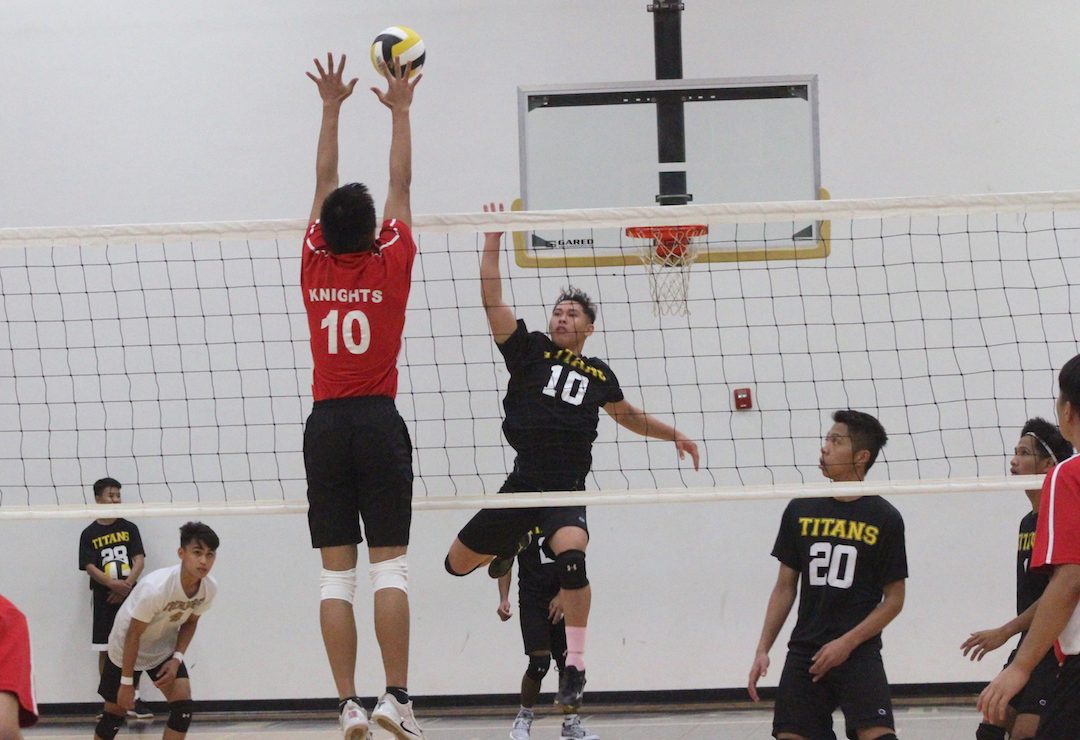 Saturday evening marked the first home game for the Tiyan Titans boys volleyball team and they ushered in the new season with a straight set victory over the St. John’s Knights 25-17, 25-16.

The Titans were dominant on the offensive end, registering 10 kills in the 1st set with 12 more coming in the 2nd set to propel them to an early (2-0) season start. The Knights played their first game of the season and drop to (0-1) on the night.

Directing traffic for the Titan’s offense was setter Richard Santos, who takes on a new but temporary role while moving from right side hitter from last season. With a new setter on the way, the senior Santos has filled the role of distributor for the opening games and he’s found his own niche.

“We’re getting used to it and I’m just trying to make the connections with the guys as best as I can. I would take on setting in practice sometimes, plus we do workouts over summer so I know where our players want to hit,” said Santos on setting.

Santos set up 9 of the 12 kills in the second set while grabbing a pair of his own. As smooth as Santos was in the Tiyan frontline head coach Rod Pama would much rather utilize Santos’ hitting potential.

“Our primary setter hasn’t gotten cleared yet, but Richard’s role has been important regardless. But his role as our right side hitter is way more important,” added Pama.

Tiyan posted a 21-10 lead over the Knights in the opening set before allowing St. John’s to creep back into the game by shaving off four straight points to get within 23-16. An error by the Knights at the net ended the set as the Titans were working in players from their second unit.

Wendy’s Players of the Game – Richard Santos and Ramil Padigos

Padigos gets hot in 2nd

Tiyan got high productivity from their star hitters in the 2nd set with both Jude Cruz and Padigos getting four kills. Cruz did most of his damage early on, registering his fourth kill to give Tiyan a 15-9 advantage.

Padigos went back to back on kills after a Knights timeout to give himself four, extending the Tiyan lead 18-10. Padigos added an ace two possessions later followed by a game-clinching block on Knights middle Allister Liu to end the game 25-16.

“I didn’t feel intensified; I was just fulfilling my role,” said Padigos on his big 2nd set. “Everyone on the team has a job to do and we just have to play out our roles.”

Even with the loss of two key components in their championship run from last season in setter Johnsey Hagel and middle Giovanni Manglona, Tiyan has looked as sharp as ever by winning the pre-season tournament for the second straight year while being considered a strong championship contender.

But the players aren’t buying too much into their own hype by staying humble.

“We’re contenders, but we still have  a lot to work on. Consistency is the biggest thing we need to work on right now. Our fan base has gotten bigger throughout the years and the support is really all we need. That’s what really motivates us to do better every day,” said Ramil.

The Tiyan volleyball program has found stability behind coach Pama which is the driving force behind their fluid play.

“We’ve developed a brotherhood here. Once we stepped on this program four years ago, a lot of the boys were excited to have their own high school and starting a new volleyball program. A lot of them came from my program in Untalan, so having them develop into a great athlete and having a competitive mindset mixed with being humble is really important,” said Pama.

Titan Niel Ericsson grabs his second kill of the set off a pretty pass from Santos. (photo by Robert Balajadia)

Knights Haram Kim attacks from the outside during the 2nd set. (photo by Robert Balajadia)

Titan Ramil Padigos lays a heavy hit down for one of his four kills in the set. (photo by Robert Balajadia)

The Knights celebrate an ace from Isaac Sim to fuel a 4-0 run in the 1st set. (photo by Robert Balajadia)

Titan Kobe Quiambao gets a kill in the closing moments of the opening set. (photo by Robert Balajadia)