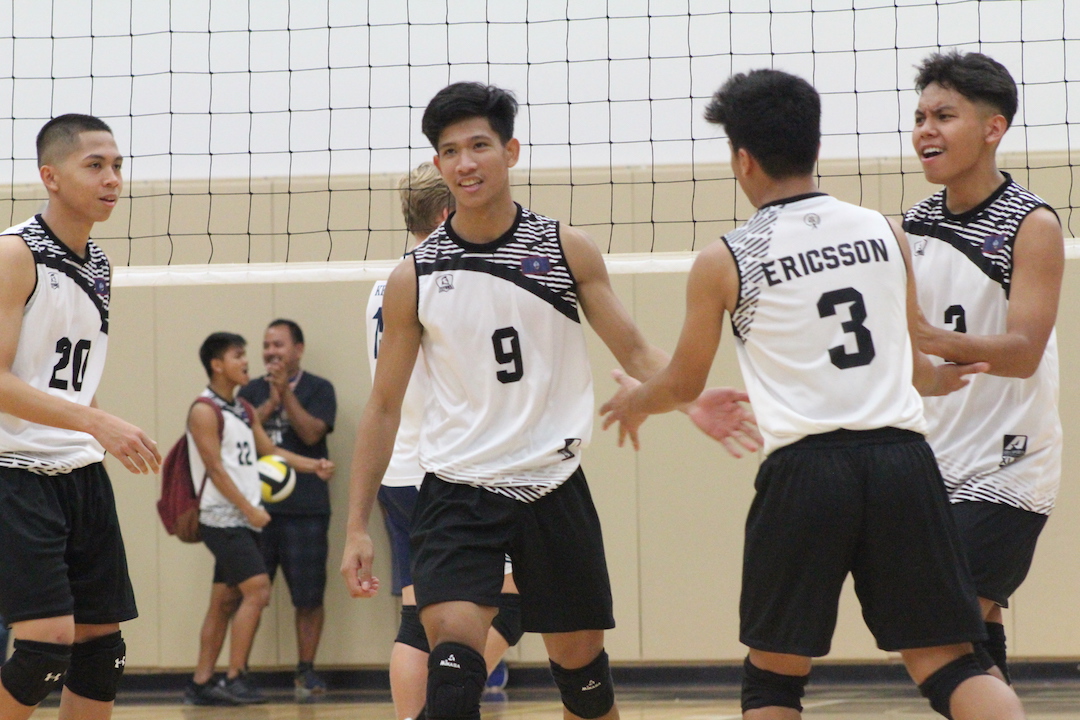 The Tiyan Titans are headed back to the IIAAG Boys Volleyball Finals after rallying to defeat the Harvest Eagles in five wild sets 25-27, 25-17, 20-25, 25-23, 15-9 in the Titan gym Thursday evening. Despite falling two sets to one, the Titan’s confidence never wavered.

“We never had any doubt,” said Titans head coach Rod Pama. “Coaches can say so much when we’re training the kids to be successful, but it comes down the hard work they put in. I want them to be satisfied when they walk on the court, win or lose. I want them to put their best effort in, and they did that today against an incredible Harvest team.”

In true MVP fashion, Titan Jude Cruz led his team with 14 kills, registering most of his work in the 4th and 5th sets when his team’s back was against the wall.

“I had to be confident and have the right mindset no matter what. I just had to do my part and stay focused. I’m not the only one out there and if we’re not playing as a team then I can’t play my game. It’s a total team effort,” said Cruz on his performance.

The Tiyan fan base was off their feet in the final set as the home team secured an 8-3 lead before the 5th set court change. The Eagles fought their way back to get within 8-6 with kills from Mason Caldwell and James Jeong to quiet down the crowd.

Two straight unforced Eagle errors put them in a 10-6 hole before Titan Neil Ericsson scored two for Tiyan off a block and kill, putting the home team up 12-6 with all the momentum. Up 14-9, the Titans defense set up the final shot as Jericho Snaer put the final touches on a kill for the 15-9 match point.

“We had the right mindset and we kept our composure,” said Snaer on the frantic final innings. “We got down at times, but we always played one point at a time.”

Coach Pama wasn’t happy with his teams performance against the Geckos Tuesday where the Titans were also pushed to five sets. With just a day to get his team ready for Harvest, Pama lit a fire under his squad. And with just a little over a day to prepare for the Finals against FD, the Titans are proven battle tested.

“We’ve been working on this since last season. I asked them where they wanted to go after that Championship Game and they started believing in themselves and their work ethic. They are always finding ways to work harder. We weren’t ready for the Friar firepower when we met them in the regular season. It was a blessing in disguise that we worked so hard these past playoff games to prepare us for what’s to come against FD,” said Pama.

Fresh off of winning the Co-MVP, Cruz said he felt no pressure to prove his title with his sights set on bigger accolades.

“It was something I really wanted when I was a freshman, but now that I have it I see that it’s just a ‘title’. No one’s going to remember the name of the MVP, they’re just going to remember which team won the Championship,” said Cruz.

Tiyan’s offense came out firing in the 1st with six of their eight points coming off kills. Cruz and Padigos had a pair each as they managed to take a 8-4 lead early. Caldwell started to generate his own heat after notching his third kill to get his team back with 9-7. Caldwell gave the Eagles their first lead of the set off a block 15-14, and both teams would battle back and forth with the lead not stretching further than two points for the set’s remainder.

Cruz and Clayton Mitchell would then trade blows with the score tied at 25. An unforced error from Tiyan followed by an out of bounds hit by Cruz put the Eagles ahead one set to none.

The second set belonged to Padigos and Santos as the pair combined for all six of the Titan’s first points of the set, controlling a 6-3 lead.  Padigos would send the crowd into a frenzy after he attacked a free ball for a big kill to go up 20-13. Snaer would give close out the Titans final points as they evened the game one set each 25-17.

Caldwell took over in the 3rd set by unloading three straight Eagle kills for a 4-1 early lead. Cruz provided a jump start to the Tiyan attack with two kills in a 4-0 run to knot the game at 11. Caldwell registered his sixth kill of the set to go up 16-14, sparking a 5-0 run to take a 20-14 advantage. A short rally from the Titans was thwarted by Caldwell as the tennis star closed out the 3rd set with a vicious kill to the Tiyan back line 25-20.

Cruz started to get rolling in the 4th, getting three kills in short spurts for an 11-9 lead. The Eagle’s responded to the challenge as Mitchell and Jacob Oshiro would get Harvest back within striking distance down 14-13. Kills from Padigos and Cruz late in the set put Tiyan ahead 20-15. Harvest would chip away at the lead with Mitchell and Caldwell heavily involved in a 5-1 run that kept the score close 23-21.

Caldwell would misfire on a game-tying kill, ending the 4th set 25-23.

Cruz caught fire in the 5th with three kills and a block right out the gates for a 6-3 lead. The Eagles would battle back after the court change to get as close as 8-6, but clutch plays from Ericsson and Snaer would lift the Titans into Saturday’s Championship game.

The FD Friars locked down the other spot in the volleyball finals after sweeping the ND Royals in straight sets. Led by Nathaniel Kyle Gaitan and De’Aundre Cruz against ND, the #1 seeded Friars are hoping to bring in the schools eighth school title this year. Co-MVP Logan Pangelinan and fellow Co-MVP Jude Cruz will meet for the first time since winning the award.

Cruz gets hot early in the 5th set with a kill off a Harvest block. (photo by Robert Balajadia)

Titan Jude Cruz finds a gap in the defense for one of his 14 kills on the night. (photo by Robert Balajadia)

Titan Richard Santos dinks the ball over the block. (photo by Robert Balajadia)

Caldwell gets fired up after slamming down a vicious kill in the 3rd set. (photo by Robert Balajadia)

A battle for a free ball between Eagle Mason Caldwell and Titan Richard Santos ends in a point for the home team. (photo by Robert Balajadia)

Eagle Alan Thomas soars high for a kill in the opening set. (photo by Robert Balajadia)

Eagle Mason Caldwell fires a shot through the block for one of his early kills. (photo by Robert Balajadia)

Titan Ramil Padigos checks in early as he grabs a kill in the opening set. (photo by Robert Balajadia)