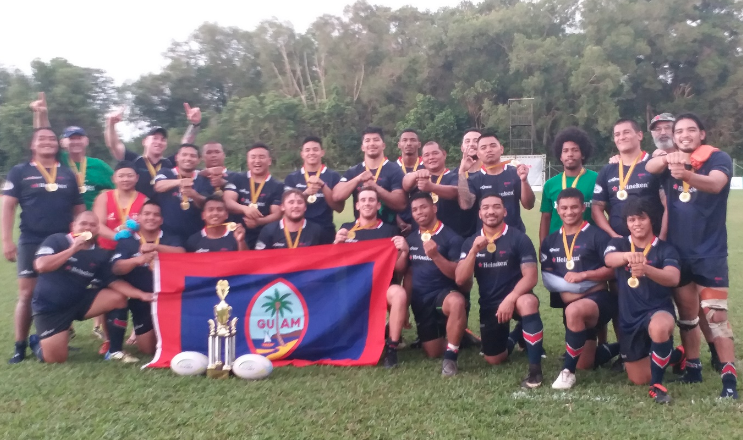 PRESS RELEASE – The Heineken Guam National Men’s Rugby team completed a sweep of the Asia Rugby Division 3 East tournament with another gutsy performance and a huge 52-12 win over China on Thursday.

Guam again started strong and dominated China from the outset. A number of aggressive phases saw Chris Sgro cross the line for the first try in the third minute which Gerard Aguon converted. In the twelfth minute, Jacob Flores made a strong run from the scrum and set up a ruck. Quick ball to Vao Vaiau saw him score. Aguon again converted to take the score to 14 – 0.

Gerard Aguon slotted a penalty and from the resulting kick off , Guam’s Earl Pascual made a huge return run and passed to Johnny Borja. Borja continued the run but was tripped as he had the try line in his sights. Guam took advantage of the penalty to pass the ball wide to James Martinez to break through and score under the posts. Aguon again converted. Guam led 24 – 0 after only 20 minutes.

Guam was awarded a penalty try after a powerful scrum demolished the China pack on their try line incurring the penalty. Aguon again added the two extra points. Half time score was 31 – 0 to Guam and China looked really rattled.

Coach Penn emphasized the need to keep on top and Guam’s Chris Sgro responded immediately with a try under the posts at the beginning of the second half. Aguon again converted.

At this point, Guam let down their guard and China, after rolling in 6 of their 8 substitutes, upped their effort and scored two tries to make the score 38 – 12 at the 60 minute mark.

The pride and determination of the Heineken Guam men showed through however and Chris Sgro was able to add his fourth try and Gerard Aguon slotted his 7th conversion of the game to take Guam to 52 – 12 when the final whistle blew.

While the team deserves to bathe in the afterglow of two very comprehensive wins, special mention and huge kudos to Gerard Aguon who was Mr Perfect over the two games with 14 of 14 kicking including some very difficult sideline conversions.

As Team Guam sits in Manila preparing for a third match in five days against a Philippines Residents team on Saturday, we would like to acknowledge all of our mothers on this, their special day, for without them none of this would be possible.