With the April 12th through the 14th upcoming APL Guam Smokin Wheels Weekend quickly approaching racers were eager to come out this past Sunday for round 2 of the 2019 Monster Energy Guam Motocross Championship at the Guam International Raceway in Yigo for some race training and tuning in preparation for the big event. 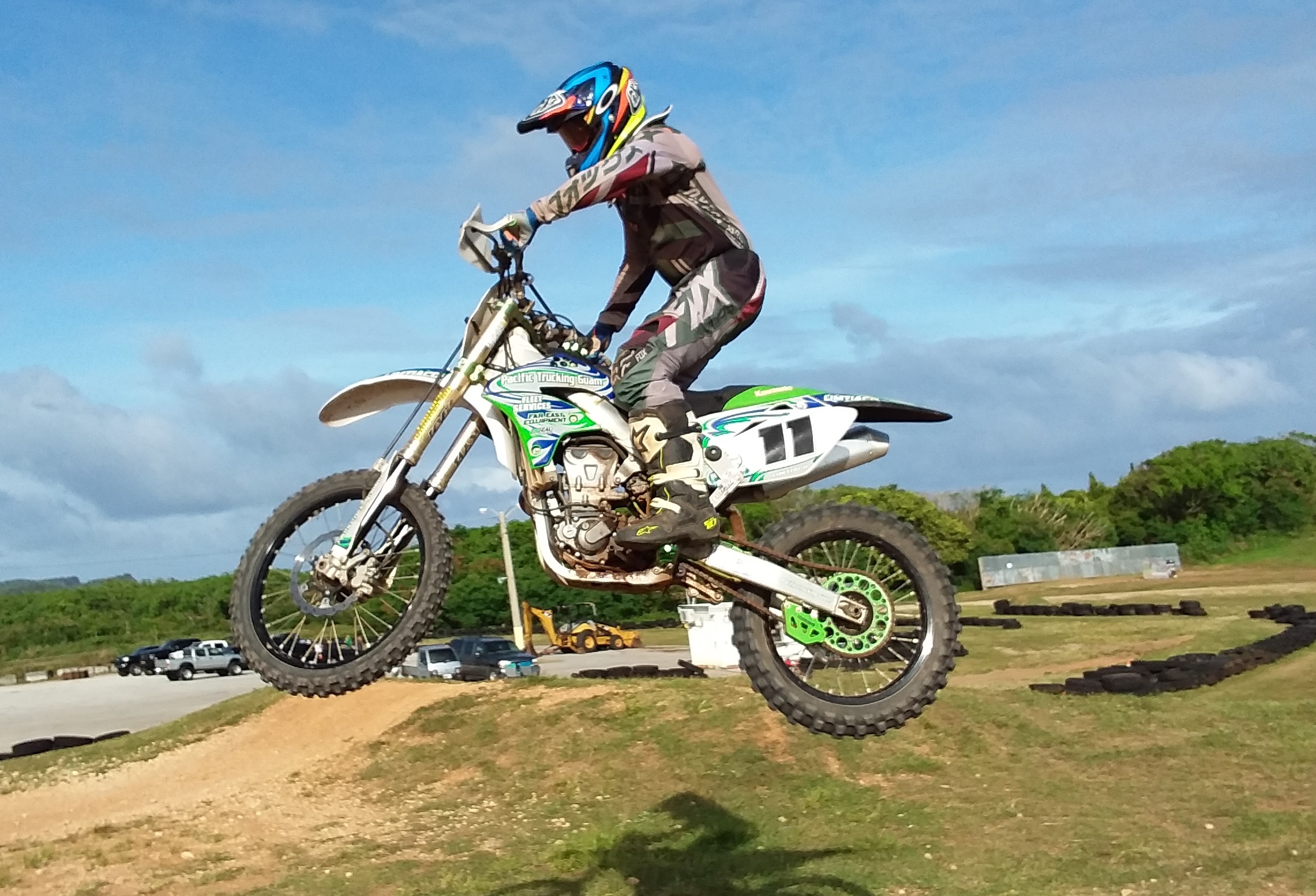 With the April 12th through the 14th upcoming APL Guam Smokin Wheels Weekend quickly approaching racers were eager to come out this past Sunday for round 2 of the 2019 Monster Energy Guam Motocross Championship at the Guam International Raceway in Yigo for some race training and tuning in preparation for the big event. The large field of competitors included both several mini bike youth classes ranging from ages 4 years and up and also by the full sized machines of the Open Atv and Motorcycle classes that saw competitors ages ranging from 15 years and up. Racing kicked off at just before noon with a course layout that was tough and challenging on the participant and machine.

#12 Gabriel Calvo took the 65cc class round win on Sunday.

In heat one of two for the Open Motorcycle division #7 Yamaha mounted JR Cepeda was out front and pulling away early from the rest of the field. #1 Lil John Agoun was running in a strong second with #55 Carlo Pangelinan and #85 Blaze Aiken in third and fourth respectively. By the midway point of this first of two heats the team Cycles Plus Kawasaki rider Blaze Aiken had begun pressuring the #55 of Carlo Pangelinan for the third position. After a short battle Pangelinan relinquished third to Blaze Aiken who was on the throttle and making up ground on the two leaders. With just several minutes left in the heat Lil John Aguon had closed in on the #7 of Cepeda and began a challenge for the lead. The two banged off each others machines several times before the dogged assaults by the #1 of Aguon forced the former multi time Guam champ Cepeda to concede the lead. Aguon took his Yamaha to a first with Cepeda second, #85 Aiken in third, #55 Pangelinan fourth, and #51 Frank Rios in fifth.

In heat two it was all the #1 of Lil John Aguon as he snarled his way to the front of the field to take the lead and then went on uncontested for the heat two win and the overall round 2 championship win. Taking second was the #7 of JR Cepeda with the #85 of Aiken in third, #55 Pangelinan fourth and #11 Mike Limtiaco taking fifth.

Overall #1 Lil John Agoun took the round 2 overall win extending his points lead 97 to 91 over the #7 of JR Cepeda second in the championship standings. #85 Blaze Aikens holds third in the points with 80 points.

In the Open Atv class #75 George Santos on a Yamaha took an early lead over his son #64 George Jr. Santos on a Yamaha who was running in second. #88 Camillo Lorenzo had third locked down early on and was also aboard contesting a Yamaha. As the laps began clicking off the #75 of George Santos slowly had pulled away settled into a comfortable lead over the field. The rest of the field meanwhile were from settled and comfortable and were in full out battle mode as the #4 of Cycles Plus rider Robert Bucek aboard a Suzuki was moving up from the last place position to begin a challenge on the #88 of Lorenzo for third. Lorenzo was putting up a good fight and making it very difficult for the #4 of Bucek to take the position but with several heated bar banging laps going down the beast Bucek snuck by for the position. Bucek then moved up to the back of the #64 machine of George Jr. Santos to battle for the second place position. After several heart stopping failed attempts to get by the on the throttle #64 of Santos the stumped Bucek was given a gift as Santos spun the #64 machine out in a tight corner allowing Bucek to now own the second place position. Back up front with a substantial lead the #75 of Santos was looking solid for the win but again Bucek was given a gift as a mechanical issue began to plague and slow down the leader Santos. Bucek seeing that Santos was slowing had pounced at the late in the race gift and was able to just squeak by mere feet before the finish line for the win. Taking second overall for round 2 was the #64 of George Jr. Santos with #75 George Santos in third. Early front runner #88 Camillo Lorenzo took fourth overall.
The team Cycles Plus rider #4 Robert Bucek aboard a Suzuki leads the championships by ten points after two of six championship rounds 97 points over the #75 of George Santos in second with 87 points.

In the Open Minibike class chaos assumed control as riders went down like flies. Emerging victorious from the mayhem was the #31 of Richard Wenden aboard a 65cc KTM machine. Richard contesting aboard the smallest machine in the Open Mini class put down quick precise laps lap after lap to take the win. Taking second was #25 team Cycles Plus rider Lawrence Limtiaco who had fallen but was able to brush himself off to take second place. In third was #74 Damien Manibusan who was up front for much of the event but had also fallen and had difficulty restarting his machine. Up front early was #22 Wyett Santos who suffered a mechanical and was unable to finish.

In the Over 40 Vet class #11 Mike Limtiaco on a Kawasaki took first with #57 Kim Aiken in second, #51 Frank Rios in third, and fourth was #25 Larry Limtiaco.

In the 250cc class #57 Blaze Aiken aboard the team Cycles Plus Kawasaki took the win with #55 Carlo Pangelinan in second, #57 Kim Aiken in third, #23 Jordan Leon Guerrero in fourth and in fifth was #51 Frank Rios.

Next on the motocross calendar will be the APL Guam Smokin Wheels Weekend on April 12th through the 14th at the Guam International Raceway in Yigo.

Next on the Monster Energy Guam Championship Motocross race schedule will be round 3 of the six round 2019 Monster Energy Guam Motocross Championships and will be held on Sunday May 5th at the Guam International Raceway home of the Jose and Hermenia Calvo Memorial Off road Park. Gates open at 8am and the racing kicks off at 11:30am. Everyone is invited to attend to watch free of charge. Interested new or experienced riders are encouraged for more information to visit https://girmac.teamapp.com or contact public information officer Robert Bucek by call or text at 727-5381.