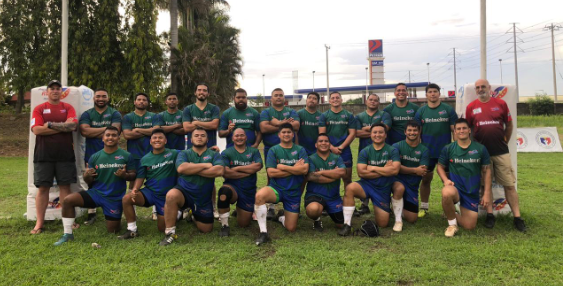 PRESS RELEASE – The Heineken Guam Men’s Rugby team flew out early Saturday morning to join United Arab Emirates, Thailand and Kazakhstan in the Asia Rugby Championship’s Division 2 rugby tournament to be held in Hui Hin, Thailand on May 15 and 18.

Guam stopped in Manila on Saturday May 11 to play the Philippine Residents team at Southern Plains field.  In a seesaw, and at times testy, game the Residents took an early lead but a good series of plays saw Chris Sgro score to give Guam the lead. A second try to Paul Eustaquio had Guam dominating at the half but two tries by the Residents in the second half saw them come out on top 22 – 18.

Guam’s first match of the Championship will be against UAE on Wednesday May 15 while host Thailand will play the pre-tournament favorites Kazakhstan.  It should be noted that Kazakhstan are a former Top 5 team in Asia and UAE were in Division 1 in 2017 (returning to D2 only because they withdrew from the D1 tournament in 2018) so this year’s competition will be intense.  The winners of the first round matches face off on May 18 for the Division 2 Championship and automatic promotion to Division 1. First game losers play off for third place bragging rights but both return to Division 3 for 2020.

The Guam team is expecting tough competition this year but old hands Rob Leon Guerrero,  Brian Ramiro, Paul Eustaquio, Randy Mendiola, Chris Sgro, Vinson Calvo and Earl Pascual are expected to be up to the challenge and lead the younger brigade to perform well.   Guam has not played UAE before so it is looking forward to the opportunity to surprise them with a robust and passionate style of play.

Coach Tony Penn is pleased with the preparation of the team “There is a lot of natural talent and pride in playing for our island on this team.  The boys are really up for the challenge this tournament brings. Returning to Division 2 was a well earned reward for these players and shows that we are not out of place at this level of competition.”

“I am extremely grateful to Coach Penn who brings his vast experience in New Zealand rugby to support our national program.  He continues to be a tremendous resource in getting the best out of our relatively small and young player pool. We also appreciate the help of Heineken and are proud to wear their logo on our playing kit in this important Asia Championship.”  said Stephen Grantham, Guam Rugby Union President.