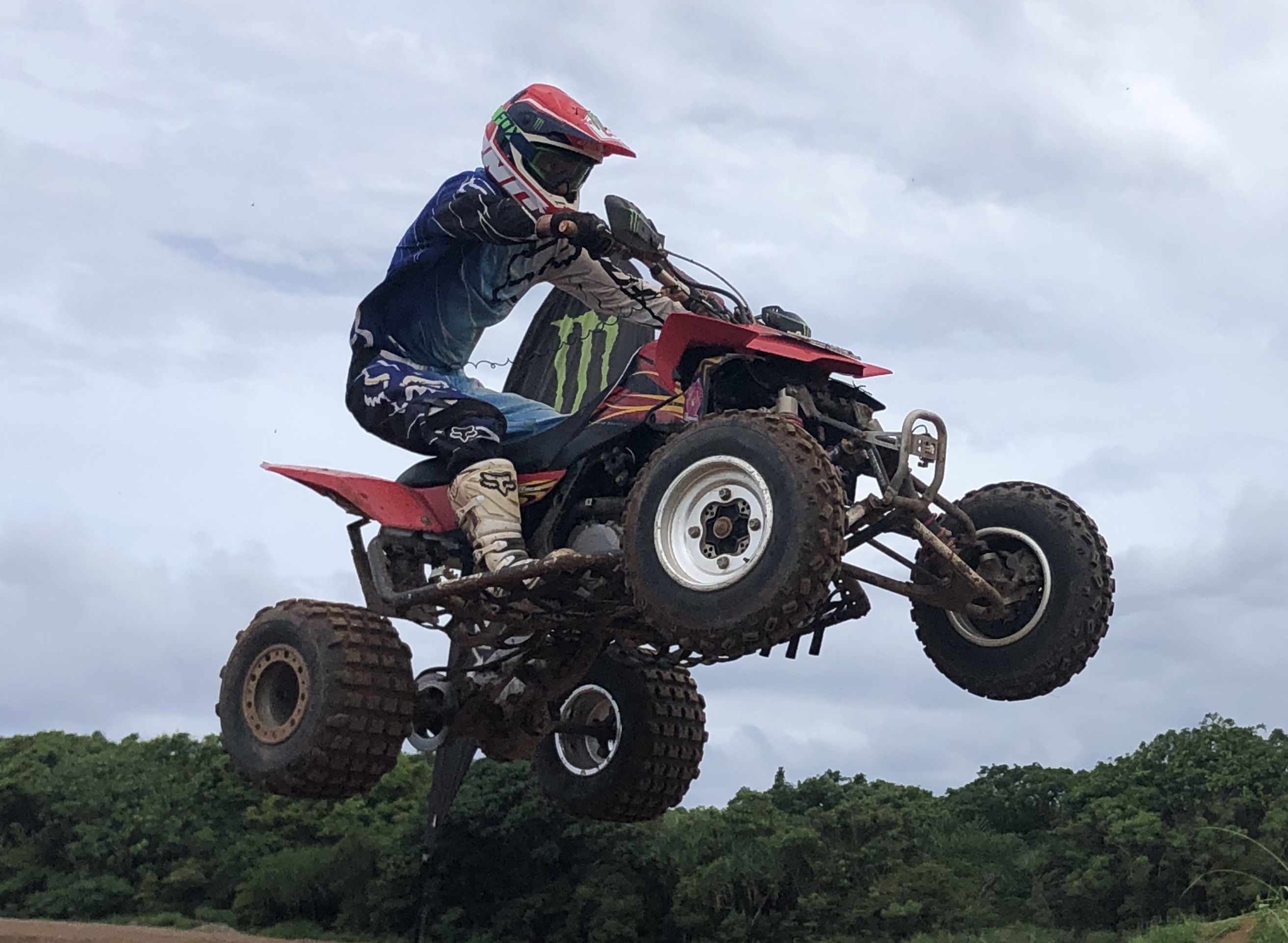 Round 4 of the 2019 Monster Energy Guam Motocross Championships continued this past Sunday at the Guam International Raceway in Yigo. Under ideal weather conditions and a race course that was loaded with jumps, bumps, and many switch back turns to challenge the participants the fans and family supporters were in for a full day of bar banging action.  The event was open to the public to come out with their coolers and folding chairs and watch as several different classes competed in a two heat per class motocross format. Classes included the 50cc kids minibike class where riders as young as four years of age competed on the very same course as the bigger machines. Classes ranged in all sizes and included an over 40 vet class along with both motorcycle and atv classes.  Racing kicked off at just before noon.

In the Open Motorcycle division #1 Lil John Aguon aboard his RPM Yamaha supported 450 easily swept the round to take the win with #55 Carlo Pangelinan on his KTM 250 took second and #11 Michael Limtiaco on a borrowed Yamaha two stroker finished 3rd. Rounding out the top five respectively were #23 Jordan Leon Guerrero on a Yamaha 125 and #343 RJ Santos on his Yamaha 250.

In the Open Atv class #75 George Santos took his Yamaha to the overall win over second place finisher #4 Robert Bucek aboard the Cycles Plus Suzuki and third place finisher Yamaha mounted #88 Camillo Lorenzo.

In the Open Minibike class #31 Richard Wenden aboard a KTM 65 battled it out for the win with #25 Lawrence Limtiaco who was aboard the team Cycles Plus Kawasaki 85. At the the checkers it was Limtiaco taking the round win with Wenden taking second and #74 Damien Manibusan on a Honda in third. #22 Wyett Santos aboard a KTM took fourth with Kawasaki mounted #10 Derin Nauta in fifth.

In the 250cc class KTM mounted #55 Carlo Pangelinan took the win with Yamaha rider #23 Jordan Leon Guerrero in second and #343 RJ Santos in third also on a Yamaha.

The 65cc Kids Mini Bike class had #111 John boy Agoun debuting his new ride a Yamaha 65 by taking a dominating round win over #21 Kawasaki mounted Jessani Leon Guerrero in second and #20 Jace Calvo in third. Rounding out the top five respectively were #75 Jay Whitman and #15 Ty Overstreet.

In the 50cc Kids Minibike class saw another dominating win by #1 John boy Aguon aboard a KTM. Taking second was #98 Caden Castin with #11 Leo Limtiaco in third. Rounding out the top five respectively were #12 Ynapu Aguon and #451 Mark Little.

In the Open Kids Mini Atv class #75 Dylan Whitman took first place over #451 Eric Little in second and with #451 Greyson Overstreet in third.

Next on the Monster Energy Guam Championship Motocross race schedule will be round 5 of the six round 2019 Monster Energy Guam Motocross Championships and will be held on Sunday August 25th at the Guam International Raceway home of the Jose and Hermenia Calvo Memorial Off road Park. Gates open at 8am and the racing kicks off at 11:30am. Everyone is invited to attend to watch free of charge. Interested new or experienced riders are encouraged for more information to visit https://girmac.teamapp.com  or contact public information officer Robert Bucek by call or text at 727-5381.

#55 Carlo Pangelinan took first in the 250cc class at round four of he Guam motocross championships.