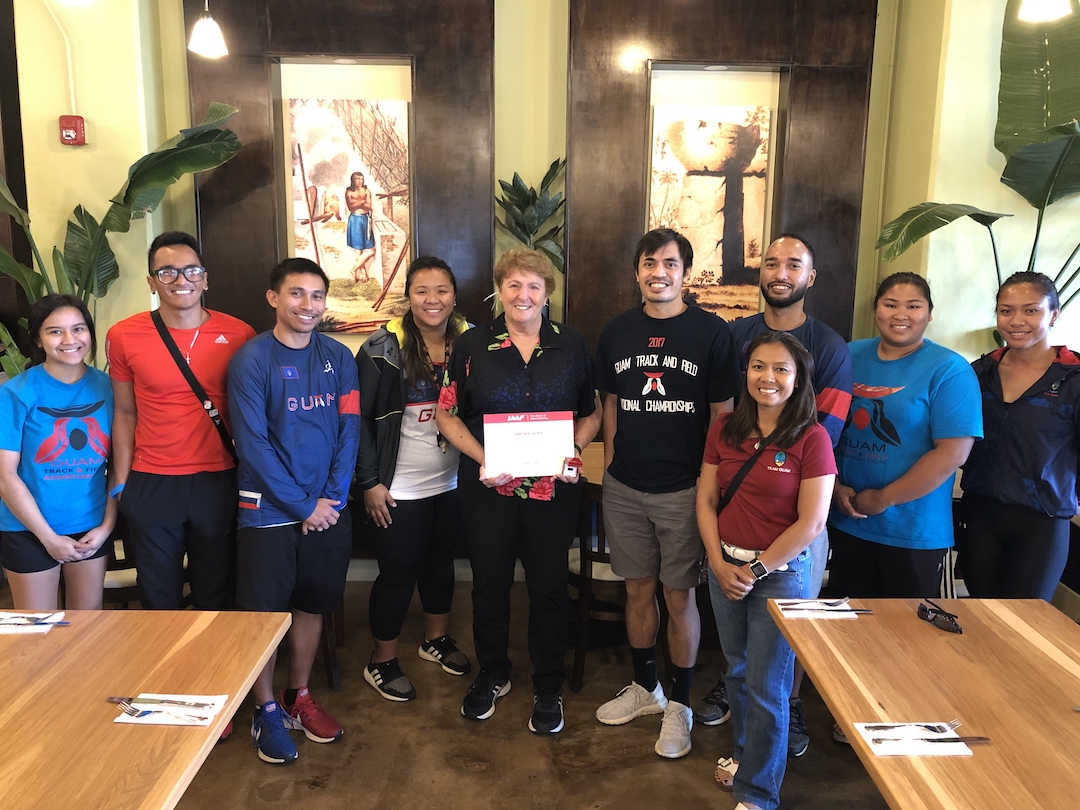 PRESS RELEASE – Josephine Pinto, a longtime track and field technical official and administrator on Guam, was recently awarded the prestigious International Association of Athletics Federations (IAAF) Veteran Pin award by the world athletics governing body for her long and meritorious service to the course of world athletics within the IAAF. Pinto was one of three recipients from the Oceania Area and one of 18 worldwide to be recognized at the 52nd IAAF Congress in Doha, Qatar in September. She was unable to attend the ceremony in Qatar but was presented the award by the Guam Track and Field Association (GTFA) earlier this week.

Pinto is a certified IAAF Area Technical Official and has been active in the sport of track and field in various roles since 1985. She served as the General Secretary in the inaugural board for the newly formed Guam Track and Field Association in 1991 and assisted in the planning and construction of the first two synthetic tracks built on Guam in 1994.

“As an official I have had the pleasure and honor to see the sport of track and field grow on the island of Guam. From the first days of timing with stopwatches to the introduction of fully automatic timing/photo finish the sport of Athletics on Guam has evolved and I hope that it keeps evolving to afford our athletes more opportunities to improve and represent the island that they love,” said Pinto.

“I have been lucky enough to play a small role in the larger scheme of things for our  athletes young and old. Officiating has afforded me the opportunity to travel within the Oceania area and watch as our athletes meet their goals and excel to their wildest dreams. I have made friends that have become lifelong and that I still communicate with today. If it wasn’t for young athletes here on Guam and older athletes within the running community this award would not have been possible. Lastly and most importantly, if it wasn’t for Gaynell Marsh, my lifelong partner and fellow official encouraging me to strive for higher ratings I would not have received this award. It Is a pleasure and an honor to accept this award not just for me but for all the officials who spend countless hours on the tracks and on the roads of Guam.”

“Ms.Pinto has made countless contributions to the sport of track and field on Guam for over 30 years and is most deserving of this prestigious award. She has been involved in growing athletics in many capacities in road races and track and field meets in Guam and the Oceania region,” said Derek Mandell, GTFA President.  “On a personal note, I have known Ms. Pinto and her husband, the late Gaynell Marsh, since I was first introduced to the world of track and field as a child in the early 90s. Both she and Mr. Marsh were influential in my growth as an athlete and a person.”