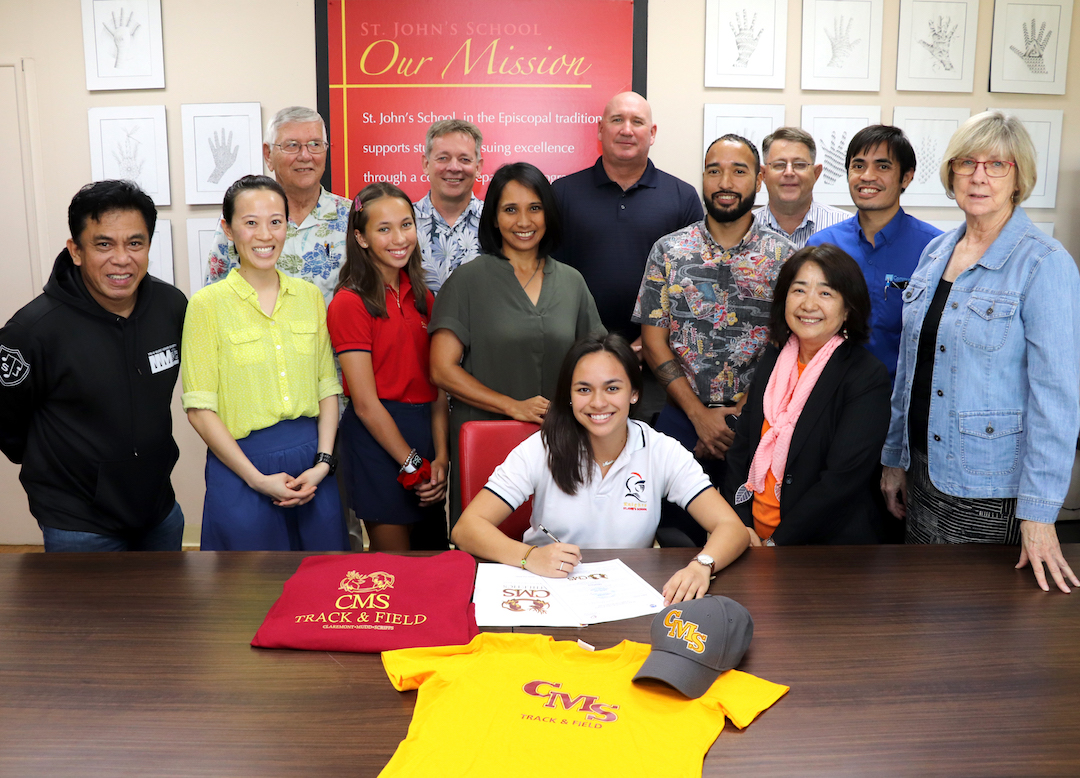 PRESS RELEASE – On February 4, 2020, St. John’s School Cross Country/Track and Field Team Captain and Student Council President, Madison Packbier, signed her collegiate letter of intent to attend Claremont McKenna College (CMC) and compete for their varsity women’s track and field team. During her signing, she was surrounded by family, friends, teachers, administrators, and coaches to celebrate this joyous chapter of her life.

Packbier stated that she was looking for a top liberal arts college where competing at the next level would not come at the expense of academics. “I chose Claremont McKenna College because it not only had an outstanding track and field program, it also gave me a challenging academic environment. Once I learned what it would take to be accepted at a school that is as highly selective as CMC, I prepared as best I could by practicing nearly every day to get my times to drop, pursued the International Baccalaureate Diploma Program at school, and studied for the SATs. My times, grades and scores all had to be competitive enough.” The CMC women’s track and field team has a great history of success, winning 17 Conference Championships as well as producing individual champions at Nationals.

Desmond Mandell III, Madison’s coach, mentioned that her work ethic and drive compelled him to continue to improve as a coach. “She was open to new ideas and methods, so I was able to demand a lot out of her. Madison’s willingness to be coached is the most important trait that she will carry over to college.”

She will be leaving Guam this summer with fond memories of her time with St. John’s XC (cross country) team, including the camaraderie among her track and field teammates. Packbier further elaborated that people from all different backgrounds join XC for different reasons. “Whether it be to stay in shape or to win a medal, in the process we become like a family. Throughout the season we have as our goal to win a trophy, and no matter if individually you are 1st or 58th, everyone is a part in achieving that goal.”

Not only is Packbier excited to join a high caliber team and to train under Coach Stewart and Coach Ramey in CMC’s innovative facilities, she looks forward to being part of the tight-knit CMC community, meeting new people, having new experiences and learning at a high-level institution. “Being able to train in the excellent Southern California weather year-round is a plus”, Packbier added.

Mandell hopes that Packbier competing at the next level will inspire the other Guam track and field athletes to strive to do the same. “She is a model of what is possible if you commit to your craft,” he expressed. His advice for Madison is to hold on to the passion she has for the sport, “Always remember what made you fall in love with the sport in the first place, from there everything else will fall into place. Make Guam proud!”

The high school senior would like to thank her parents for their endless support and for allowing her to travel with the Guam National Team to participate in off-island competitions in the sport she is passionate about. “They’ve supported me every step of the way and I’m extremely grateful for everything they do. I don’t think my mother has ever missed one of my track meets,” Packbier affirmed. She further would like to thank her coaches, Desmond and Derek Mandell for taking her under their wings for the past four years; the Guam Track and Field Association and the Guam National Olympic Committee for selecting her as a member of the Guam National Team and giving her the opportunities to compete internationally at the Micronesia Championships, multiple Micronesian Games, and the Pacific Games. Packbier believes this international exposure was so helpful in getting her to be noticed by collegiate coaches. Packbier is ever grateful to her St. John’s teachers and friends for their support and encouragement.

With her interests in neurology and psychology, Packbier is eager and prepared for the research opportunities at the CMC Autism Center. She hopes to pursue a career in Clinical Neuropsychology.