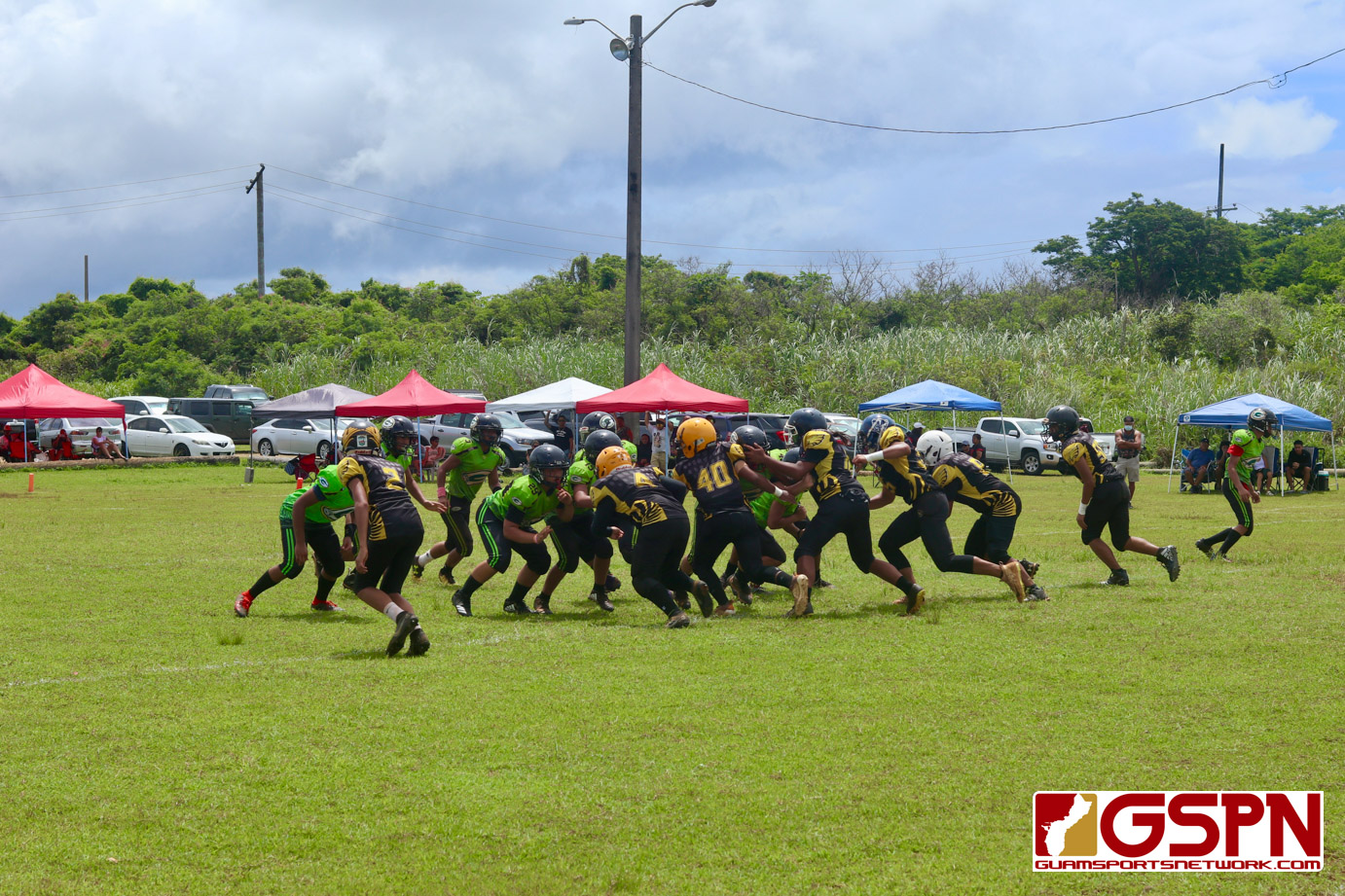 The rematch is set for the GNYFF Matua Division championship game with both the Guahan Eagles and Hal’s Angels notching hard fought victories in the semifinals Saturday afternoon.

The Eagles stamped their ticket to the championship but it was not an easy road to get there. In the end, it was defense that prevailed with the Eagles holding the Packers off with a 14-0 victory.

The Angels edged out the Cowboys 26-24 in the other semifinals.

The Packers came out with a different game plan and went to their passing game. The Eagle secondary was ready and managed to record five interceptions to keep the Packers out of the end zone.

The Eagles suffered a huge loss after Donte’ Parker suffered a hip injury in the first quarter. Parker did enough damage before his injury to help the offense get on the board with a 41-yard touchdown on the second play of the game for the Eagles.

Terince Leon Guerrero punched the two-point conversion in between the uprights to have the Eagles up 8-0 after the first quarter.

“He’s (Parker) one of our fastest players so I thought the pace of the game would slow down because he was out. But our guys all stepped up and worked as a team to fill in,” said linebacker Rayn Rios.

The Eagles had options on the ground attack with Rios, Mason Calvo and Ty Leon Guerrero finding holes to gain first downs. Despite some success on the ground, the Eagles were unable to score and were forced to punt multiple times in the first half.

The Packers got things going with their passing game with quarterback Deon Apatang finding Jake Masga for an 18-yard completion and later Joseph Mesa for a 40-yard strike to set up a first-and-goal situation.

“All those passing attempts actually surprised everyone on our team because we all thought they were going to run the ball more often,” said Rios.

With the Packers looking to score inside the 10-yard line, the Eagles’ Ty Leon Guerrero came up huge with an interception to stop the Packer momentum.

The Eagles later surrendered possession on downs and another key interception was made by defensive back Shane Untalan.

The Untalan pick set up a reverse run by Eagle quarterback Colen Salas to add some insurance points. Salas called his own number on a fake handoff, sprinting untouched in the end zone.

A third interception of the quarter was made by Rey Duran to hold the Packers scoreless by halftime with the Eagles up 14-0.

The Packers opened up the second half with some hurry-up offense that forced the Eagles to burn a timeout. The Packer quick snaps enabled running back Reynold Borja II to move the chains with runs for 22 and 18 yards.

The Packers were forced to punt with Rios recording a tackle-for-loss and Landon Suzuki sacking Apatang. The Eagles gave possession back to the Packers behind a fumble recovery by Tristen Ray Martinez.

The play from Martinez had the Packer offense back on the field and they had two first downs with Apatang finding Masga for an 8-yard completion and Borja II rushing for seven yards.

The Eagles will now face the Angels in a showdown of the top two seeds. The Eagles defeated the Angels last week in a final regular season game.

Salas said next week will be another challenge for the Eagles but the mindset will be the same. “We need to just continue to push each other. In practice, we need to work harder than we did before and communicate with each other,” said Salas.

Borja II rushed for 85 yards on 12 carries for the Packers. Packer quarterback Apatang had 10 completions for 116 yards. On defense, Masga had four tackles with one tackle behind the line of scrimmage. Martinez had two tackles and a forced fumble.

On the ground, Calvo rushed for 31 yards and Rios had 28 yards for the Eagles. Parker led the Eagles with the one rushing touchdown for 41 yards before his injury. After the game, Parker was walking on the sidelines so his status for the championship game next week is probable.

On defense, Untalan had the two key interceptions for the Eagles. Rios had a game high seven tackles and a sack. Suzuki also recorded a sack with four tackles.

In the earlier game at Eagles Field, the Packers punched their ticket to the championship game with a big 31-12 win over the Outlaws. They will take on the undefeated Hal’s Angels, 25-6 winners over the Southern Cowboys in the other semifinals.