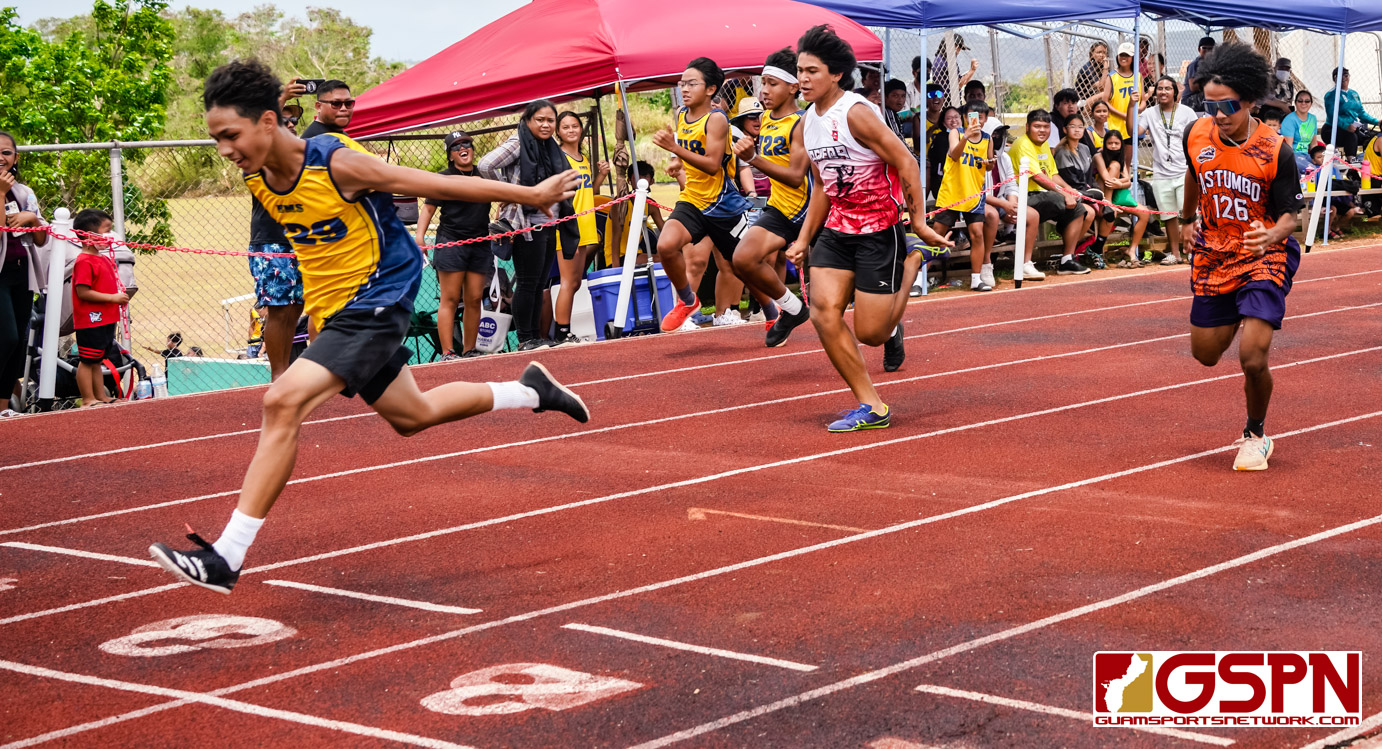 The 2022 ISA Middle School Track and Field All-Island Meet was held at the JFK Track on Saturday Morning. Two champions were crowned with the FB Leon Guerrero Hawks running away with the girls team championship and the Benavente Middle School Roadrunners coming from behind to take the boys title.

It looked like the FBLG Hawks would scoop both championships with four events remaining. But as the latter events were tallied, the Roadrunners rallied to win the boys championship with 109 points to FBLG’s 103 points.

The clinching event was the 4 X 400M relay with the Roadrunners ‘beep-beeping’ their way to a gold medal with the team composed of Anthony Ramos, Elias Chang, Kai Solomon and Malakelo Savea. The Roadrunner relay team finished with a time of 4:19.99, edging the Astumbo team (4:20.73) by less than a second. The points acquired from the relay event along with BMS victories in the shot put by Allen Toves and the Long Jump by Zhion Macapinlac helped the Roadrunners claim the boys championship.

FBLG girls won their championship by a larger margin with 132 points to Untalan’s 104 points. Despite winning just four gold medals, it was truly a team effort by the Hawks girls’ squad which placed in the top five in all the featured events.

Mary Romo won gold for the Hawks in the long jump, Alyssa San Nicolas won gold in the shot put and the other two gold medals were both relay events for FBLG. Nine other girls made the podium for the Roadrunners finishing second or third in their respective events.

The top performers for the meet were Yenia Smartt from Untalan and Rynier Di Ramos from FBLG. Smartt, a seventh grader, took home three individual golds and one silver in the girls division and Di Ramos won two golds, one silver and one bronze in the boys division.

Smartt swept the girls sprinting events, winning the 60M, 100M and 200M sprints. She nearly went 4-for-4 on the gold medal podium but the Hawks prevented perfection with a narrow victory in the 4 X 100M.

Di Ramos ran away with the distance events, winning the 1500M and 800M events, but was denied a third gold in the 400M by Agueda’s Ian Mansfield in a close finish. Di Ramos, an eighth-grader, settled for a bronze in the 4 X 400M relay.

Di Ramos continued to dominate the 1500M event as he did all season, winning with a time of 5:00.85. “The team accomplished their goals this season and I personally did as well. I had a PR in the 1500M with a time of 5:00, I wanted a sub-five minute time but the wind today was crazy,” said Di Ramos.

Aisha Siguenza, an eighth-grader representing Astumbo Middle, won the gold medal in the 800M event with a time of 3:01. “The race went well, I was starting to get tired towards the end of the race but I pushed myself to finish strong,” said Siguenza. “I’m satisfied with my performance and also for my teammates. They went out there and accomplished a lot of their goals”.