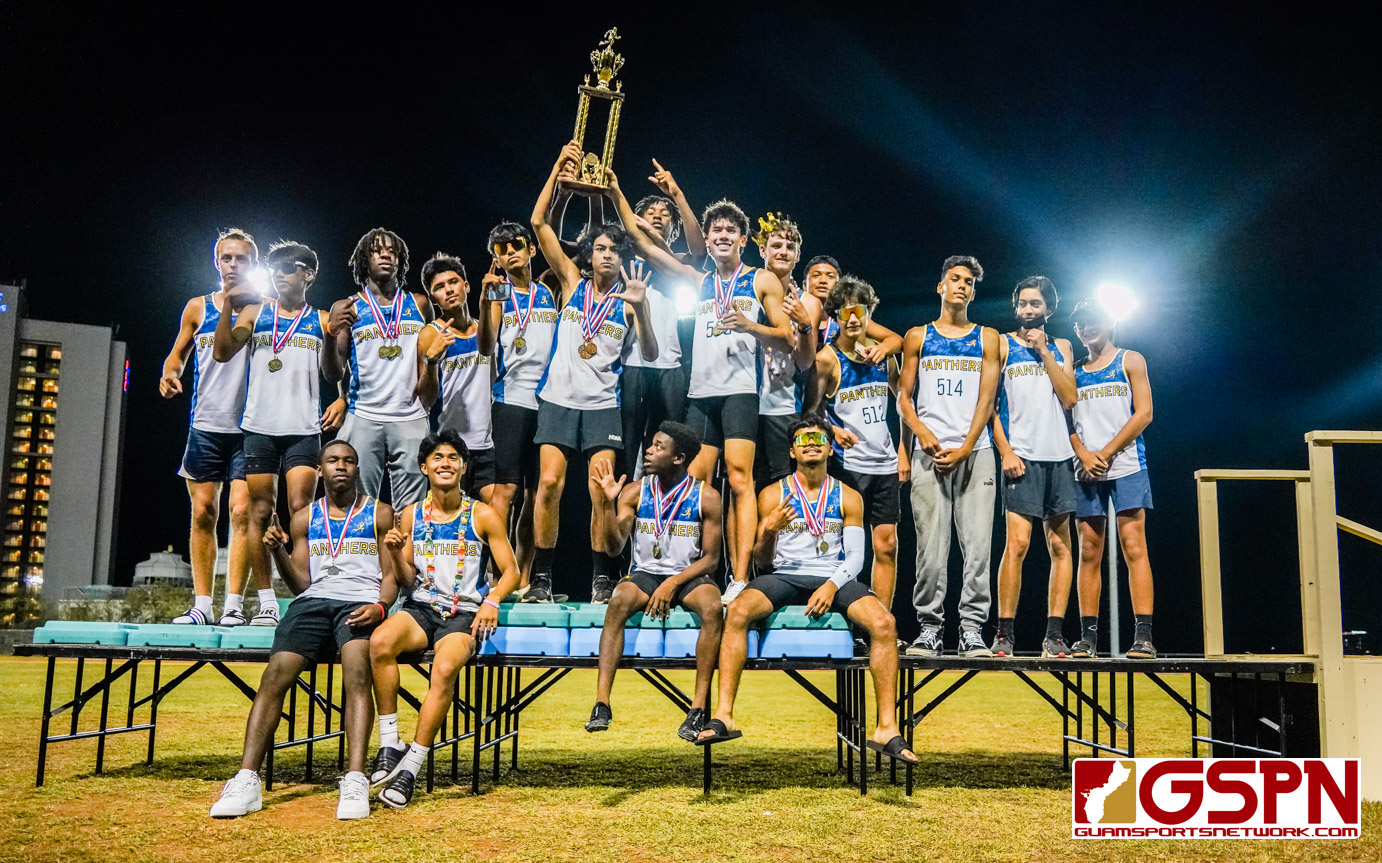 “It’s historical. Five straight championships for the boys and three straight for the girls. I’m glad that Guam High is finally getting recognized for winning that many championships in a row.”

Taitano, who has been sidelined due to health issues, continued to play a significant part of the team from a distance meeting through Google Classroom and providing the workouts for practice and the impact he has on his team showed as both the boys and girls teams rushed to his side after receiving their trophies.

“Being away physically is hard because I love coaching the kids, so I’m glad I was able to work out with them for the first 3 ½ weeks and instill in them some of the things I thought were important to ensure we at least have a shot at the title.”

“It feels good to carry on the legacy that was left by the seniors from last year especially my brother (AJ) who left with four gold medals,” said Johnson. “I’m just trying to live up to that legacy and I feel like I put my best efforts today.” Johnson scored 36 out of a possible 40 points.

Aguon, joining the team after an injury, added a big boost to the Panthers already dominant boys team taking gold and hitting his personal best in the triple jump with 12.83m and gold with the 4x100m relay and bronze in the long jump.

“I just wanted to strive to be the best I can especially joining late in the season and to be at the same level as my teammates,” said Aguon. “This is my first year in track and it allowed me to embrace my competitiveness, even with the guys from Tiyan (Dean Masnayon) and GW (Nathan Castro) those guys pushed me to do my best and to drive harder.”

In the girls division, the Guam High Panthers squeaked by the GW Geckos by a margin of three points winning the championship in the 4x400m event. Heading into the All-Island Meet, the Geckos posed the biggest threat to dethroning the Panthers heading into the final event with a one-point lead. But Guam High would not be denied as the 4x400m relay team took gold and its 10 points to overtake GW for the title. Sanchez took silver and the Geckos took bronze to round out the 4x400m top three finishers.

“We were told from the start that the difference between us and the other teams were about one or two points. So, we knew it was going to be down to the 4x400m and our team was super ready to go out and get it. They did amazing!”

Guerrero took gold for the second consecutive year in the 100m and 200m events as well as gold in the 4x100m relay event scoring a total of 30 points for the Panthers. The junior has a total of seven gold medals out of seven events dating back to last year’s All-Island where she took gold in the 100m, 200m, 400m and 4x400m events.

“Coach Dial helped us along the way, and we knew coach Taitano was with us in spirit. Both coaches helped us move along in the season and be successful by encouraging us every single day,” said Guerrero. “The motivation was focused on the championship and I’m really glad we made it.”

GW continued to put the pressure on the Panthers as they dominated the 800m, 1500m and 3000m events with junior Jordan Baden taking gold all three events. Mary Jane Gatbonton of Sanchez took silver in the 800m and 1500m events. Rebekah Stringham from Guam High took bronze in the 800m. Robin Cruz of GW took bronze in the 1500m and 3000 meter events with Keira Paz from Guam High rounding out the mid distance taking silver in the 3000m.

Melody Rosario from GW took gold in the shot put by .02 meters to out throw GAA’s Hadassah Jano-Edward who took silver and Crystal Lopez of Southern took bronze.

In the javelin event, Sanchez’s Kanemoto took gold with a personal record of 30.29 meters. Nya Belga of Okkodo took silver with 21.44 meters and teammate Sadie Apuron took bronze with 20.30 meters.

The Panthers look to run it back again next year as both their boys and girls teams are made up of mainly underclassmen with the hopes that legendary coach Taitano will return to the helm in an active capacity. Taitano looks forward to continuing the culture of winning he created at Guam High with his cross country and track programs.

“We look good for next year. I’m looking forward to next year’s track season, there’s many records I want to break and many records I will get,” said Johnson. “We’ll put in the work and get everyone on track next year and we’re going to be really good!”

“It begins with the athletes buying into the program in terms of what we are doing and trying to achieve and that has a lot to do with traditions, even during your time as my assistant coach, we won many championships together,” said Taitano. “So, the winning culture we established at Guam High, I think, really motivated the kids to work harder and more importantly to show up to practice every single day, and it showed in tonight’s outcome”