The first ever Submit event looks to make a huge splash in submission competition. 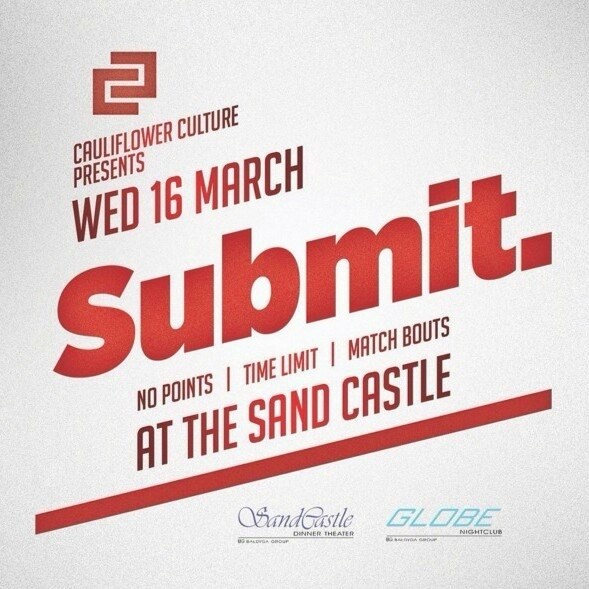 The first step to a global affect is local sensation.

For martial arts visionary Melchor Manibusan, the inaugural Submit Intl event slated for March 16 at the Sand Castle in Tumon takes that first step toward his global vision.

“We’re giving them a new and different platform,” Manibusan explained.

The platform is a submission-only, no-points system that challenges the competitors to finish their opponents.

“With Guam being the first show, we got every gym to come in and do the photo shoot. Each gym is sending their top students and teachers.”

Aflague is a low-key, long-time black belt instructor at the Purebred Academy while Guerrero just received his black belt a few months ago. Guerrero has the edge on size while Aflague holds the advantage in experience.

For Cruz, he’s looking forward to the match but the approach to the event – like in life – remains the same.

“I usually compete for free to just win a medal and bragging rights. This bout will have a cash incentive which is making me take my training to the next level. Plus Its rare to get chance to fight in a showcase like this. I just want to feel the true jiu-jitsu of my opponents. Its also about gaining experience and knowledge,” Cruz said. “I’ve always competed each tournament and fight in pursuit for the submission.  The points competition format doesn’t show the person’s true jiu-jitsu. I feel the 20-minute match will expose a player’s true weaknesses and most importantly their jiu-jitsu.”

It’s not the first go-around for the two. Sanchez got the better part of Cruz by points last year in the Abu Dhabi Open Trials. This time, Cruz looks to redeem that loss.

“I’m glad I have a chance to redeem my loss in a more solidifying fashion with this format. There can only be one winner. I just want to put on a great match for the audience and fans worldwide. There’s no beef just business.”

“Each bout will be high level and I will keep the guys on the roster that pushes all 20 minutes,” Manibusan said.

Submit will have shows around the world at major cities with the top locals in their area, but Manibusan expects to have at least  one participant from Guam at every show.

“Each show we will crown The Most Outstanding Grappler. At the end of the year we will bring each winner to Guam to challenge our top guys.”‘