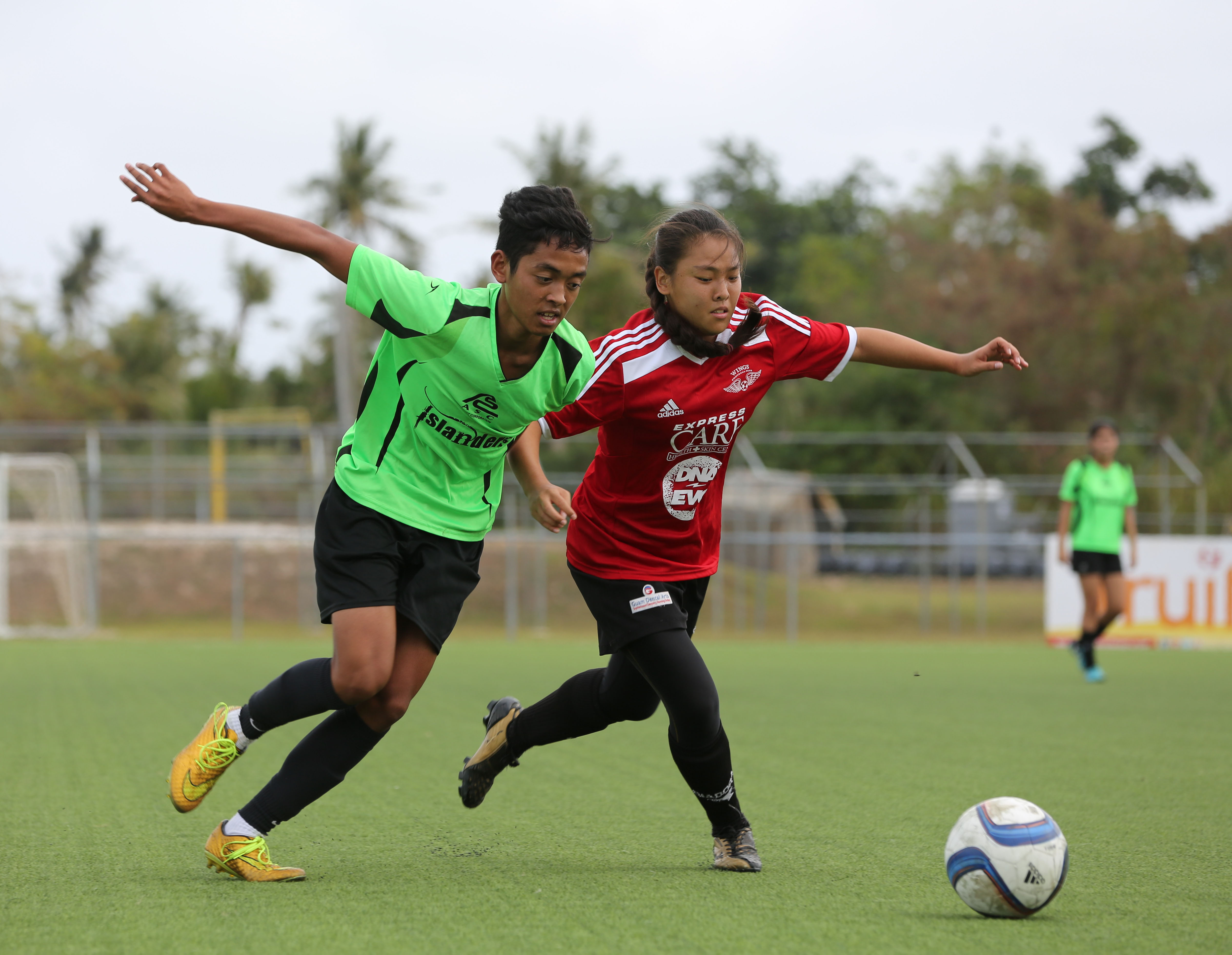 For 12-year-old Mary Nacianceno of the Tumon Typhoons Soccer Club U14 team, it was her first official youth league match playing on a full, regulation-sized pitch after playing small-sided matches in previous seasons.

“I prefer playing on the full field because it is bigger and there’s more space for passing the ball,” said Nacianceno, a sixth grader at Luis P. Untalan Middle School. “I was excited that we would be playing on a full size field this season, although after a while, it did get tiring running so much.

“It’ll help me a lot though since we play on the same size field for middle school,” added Nacianceno, who also plays for the Wildcats in the Interscholastic Girls Middle School Soccer League.

In other U14 division matches, the Tigers defeated the Southern Cobras 7-0 with hat tricks from James Lee and Raf Garcia. Kris Fernandez also scored for Tigers. Quality Distributors defeated Tsunami Sharknado 3-1 with two goals from Terrance Johnson and one from Yasmeen Lopez.

In the U17 competitive division, the Wolverines defeated the Tigers 3-1 with two goals from Brianne Leon Guerrero and one from Randi Jo Paulino. Seung Min Kim scored for the Tigers. Islanders Betde was forced to a 2-2 draw with Wings Black. Todd Pangelinan and Gabriel Tan scored for the Islanders and Takumi Kishi and Anthony Moon scored for the Wings.

Wings Red defeated the Wolverines 3-1 with goals from Justin Joseph, Nainoa Norton and Kanata Kishi. Isaiah Topasna, goalkeeper for Wolverines, scored on a drop-kick. Islanders Asut battled to a 1-1 draw with Tumon. Arthur Manglona scored for Islanders and Dominic Cruz scored for Tumon. Wings Black defeated Sidekick SC 8-3 with three goals from Kai Pahl, two each from Martin Iseke and Kyle Takano, and one from Jomei Onedera.

Tyler Concepcion scored a hat trick for Sidekick SC. Tsunami defeated Dededo 4-0 with two goals from Braeden Liebhardt and one each from Samuel Epidendio and Peyton Batton.